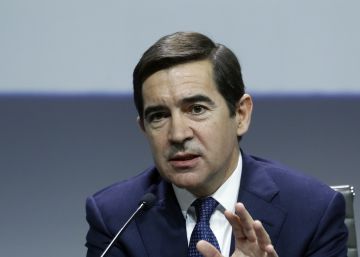 BBVA polishes the bitcoin rally. The bottom of venture capital The bank has a stake in the bitcoin trading platform Coinbase that plans to go to the Nasdaq this year. An operation that will value startup at more than 8,000 million – this was the appraisal in the last financing round at the end of 2018 – and will allow the Spanish bank to multiply its investment by more than 10. Even if you don’t sell, they will be huge latent capital gains.

BBVA – through its business of venture capital, known as Propel – tried to position itself in the burgeoning crypto business. In 2015, he became a shareholder of this platform created in 2012. He participated in a series C financing round in which Coinbase raised $ 75 million.

Only last year and the days that go from 2020, the cryptocurrency shoots more than 420% and is around its all-time highs above $ 40,000 that it marked on January 8. In its latest round of funding, in which it raised $ 300 million in October 2018, Coinbase achieved a valuation of more than $ 8 billion. And it is expected that in the IPO this price will skyrocket, even above 10 billion dollars. If it succeeds, the US platform will become what is known in the industry as a decacor.

By virtue of these assessments, the sources consulted indicate that BBVA aspires to multiply by more than 10 the investment it made more than five years ago, when several partners invested a total of 75 million dollars in that financing round. The money raised by Coibase since its creation amounts to 547 million dollars (about 450 million euros).

It is true that BBVA is not exactly one of the main shareholders of Coinbase. Their participation is less than 5%, according to financial sources. The main funds that have financed the growth of the company include giants of the venture capital such as Wellington Management, Tiger Global Management, True Capital, IVP, Fundamental Labs and the vehicle of the Japanese bank Mitsubishi UFJ. Also its founders Brian Armstrong, CEO of Coinbase, and Fred Ehrsam, who sits on the firm’s board of directors.

Coinbase communicated to the US markets regulator, the SEC, its intention to start trading on December 17. It has accepted the confidentiality clause established by US regulations, so it has not yet disclosed the company’s most sensitive information. So far, you have submitted a draft registration to your supervisor.

One of the things that differentiates Coinbase from other platforms is that it “introduced the necessary compliance, security and training tools to properly use these new assets,” according to Jay Reinemann, partner at Propel.

It is the second major divestment of Propel, a fund owned by BBVA and endowed in September 2018 with 250 million dollars. It has an office in London and another in San Francisco. Invest in fintechs both in the United States and in Europe. And it has done so successfully.

In 2018, the BBVA fund participated in the IPO of a decacorn, DocuSign, the world leader in electronic signature. It also has in its portfolio the electronic payment manager Sum Up, the marketplace loan firm Prosper, financial advisor Personal Capital, financial services provider Kasisto, and artificial intelligence company Taulia, among many others fintechs.

Billing. Coinbase has a workforce of more than 1,500 people and 59 investors, among which there are several venture capital managers, including BBVA, through its arm in this area specialized in technology, Propel, according to the Pitchbook and Crunchbase pages. . Coinbase’s 2018 turnover stood at $ 520 million, but it has made more than 14 acquisitions since then. The last one was that of the cryptocurrency trading firm Tagomi last May. The market estimates that the firm will be, once it debuts on the stock market, one of the so-called decacorns. That is, a startup with a valuation of more than 10 billion dollars, equivalent to 10 of the so-called unicorns (firms with a valuation of at least 1 billion dollars). The management team is made up of 50 people, including the co-founder and current CEO, Brian Armstrong. It remains to be seen whether, after requesting the green light from the US markets supervisor, the SEC, Coinbase will receive the placet to debut.