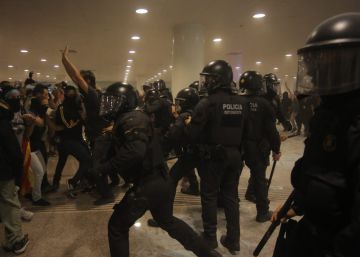 BBVA studies service warns that the altercations recorded in Catalonia in response to the judgment of the you process They have been able to subtract between one and two tenths of this year's Catalan GDP. In its report published on Wednesday about the situation of the Catalan economy, the entity appreciates that "the increase in uncertainty does not seem as intense as in October 2017, but in the short term there is also an impact".

With the aggregate and anonymized data on BBVA customer card spending, the study service detects that "the effect on the expenditure of Catalan families would have been negative but, for now, temporary." As a result, in its forecasts Catalonia would grow 1.8% in the whole of 2019.

According to these figures of payment cards and terminals, the expenditure of residents in Catalonia fell to 10% in the days of the disturbances. In the case of foreigners it collapsed up to 20%. Once the incidents were over, spending recovered to normal levels. The bank has not yet been able to do a detailed examination to see in which areas it has affected the most.

In any case, BBVA Research considers that the impact is being "negative but limited". And that has been noticed in particularly exposed sectors, such as tourism, but also in general in the creation of employment. "If they continue over time, they would introduce a downward bias on growth forecasts," he warns. Therefore, he points out that "returning to a context of stability, which allows the normal development of activities, must be a key objective of administrations." In this same line, the Bank of Spain has recently warned that if this uncertainty persists, it could end up taking its toll To the economy.

The bank recalls that after the attacks in Barcelona and the independence tensions of October 2017, there was a drop in visitor arrivals that forced an adjustment in hotel prices. And also that since then there was a worsening of business confidence and a job creation lower than what would have been achieved without uncertainty. To the point that, according to the INE data, from that moment the Catalan economy has gone from being one of the regions of Spain that grows more to be below the Spanish average.

In fact, BBVA had expected Catalonia to finally grow back in 2020 to grow more than the rest of the Spanish economy. But two factors have changed its forecast, which now puts it back on average with a GDP increase of 1.6% for next year. On the one hand, despite the diversification of the Catalan economy, BBVA focuses on the delicate situation that the industry is going through, especially that of the automobile, which can have a significant impact during the coming year.

And on the other, it highlights these new tensions in the streets, which add uncertainty about the future. However, the entity emphasizes that you have to be very cautious because you only have partial and preliminary data collected. And although they are worried about the consequences that it may have in the future on tourism, the entity's economists point out that for now the impact detected has been limited to the dates of the altercations.