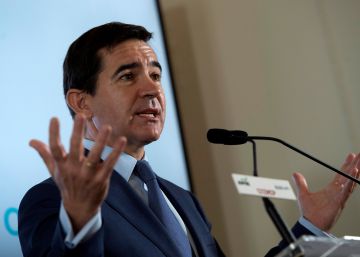 BBVA has announced a net profit of 2,442 million euros in the first half of 2019, which represents a 3.7% drop, impacted by the lower results of financial operations and higher sanitation. The company, which has faced this semester judicial investigation in the case of illegal eavesdropping, has confirmed that it will maintain its dividend policy with a pay out in cash between 35% and 40% of the result.

In a context of falling interest rates, the interest margin grows 4.6% between January and June and stands at 8,987 million, despite a 0.4% decrease in net commissions to 2,470 million euros. Gross margin reaches 11,989 million, representing an increase of 1.1%, with notable improvement in Mexico (up 12%) and South America (up 28%).

The figures have been above what the market expected and the stock moves around 1%. In the second quarter alone, BBVA achieved a net profit of 1,278 million, which exceeds the forecasts of Bloomberg analysts, who anticipated a figure of 1,190 million.

Onur Genç, CEO of BBVA, is also optimistic about the business. "We continue to observe very good dynamics in our business," he said, adding that "the interest margin grows above 10% in constant euros, compared to the first six months of last year, and the improvement in the efficiency, once again, ahead of our European competitors. " He also stressed that the capital ratio has achieved its objectives "earlier than expected."

Specifically, CET1 fully loaded (capital solvency indicator) stood at 11.52% at the end of June, above 11.3% at the end of 2018, with which the entity has already achieved the objective of placing this reference in a range between 11.5% and 12%.

The provision item stood at 261 million, 42% more, since in 2018 it incorporated capital gains on certain sales of investees carried out in Mexico, Turkey and the former real estate business area.

In terms of sanitation, the deterioration of financial assets of the first six months of 2019 registered an increase of 12.9%. Highlights the greater provision needs in the United States for specific clients of the commercial portfolio and greater passes to failed in the consumer portfolio, and in Mexico and Turkey, due to the deterioration of individual client portfolios. On the contrary, Spain registered a positive amount derived from the lower provisioning needs and, mainly, from the positive effect of the operations of selling damaged and failed loan portfolios, among which the sale stands out, in the second quarter of 2019, of doubtful and failed mortgage loans.

By geographical areas, BBVA's attributed result in Spain in the first half of 2019 stands at 734 million euros, representing a 1.6% drop. The interest margin falls by 2.37% to 1,808 million.

BBVA notes that the number of digital customers has increased by 17% in the last year to 29.7 million, which represents 54% of total customers. 48% of customers (26.1 million) interact through mobile phones, which represents an increase of 25% compared to June 2018. The objective for this year is to exceed the 50% threshold.

This week, the judge of the National Court Manuel García Castellón decided to charge BBVA as a legal entity in the investigation of an alleged case of espionage in 2004. The entity announced yesterday the departure of Eduardo Arbizu, head of internal control.