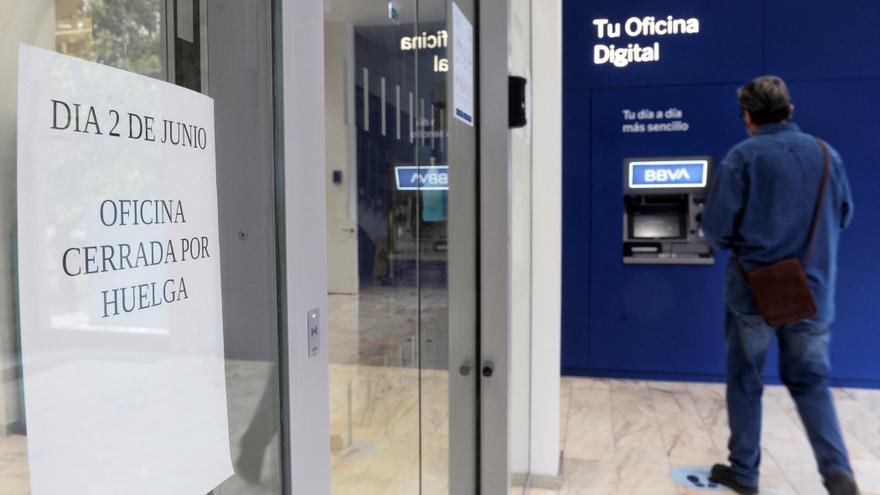 BBVA and unions have finally reached an agreement for the entity's first ERE. After more than a month and a half of negotiations, between the formal period and the previous talks, 2,935 workers will finally be affected by the dismissals, according to union sources. The parties had to give themselves a few extra days as they were unable to reach an agreement in the agreed time.

CCOO has concluded in a statement that the final agreement involves reducing the initially planned people by 863. At the beginning of the negotiation, BBVA put on the table an ERE that affected 3,798 workers, which has been reducing in recent weeks with different proposals and relocations. The union is confident that the different exit conditions that have been agreed will prevent any forced dismissal from being carried out in the context of this job cut.

"The mobilizations, work stoppages and the strike that have had a massive follow-up by BBVA's staff, has been the key engine to unravel the negotiation and get the Bank to end up yielding to a very tough position in the negotiation," says the union in its statement.

Finally, the economic conditions of the exits are as follows for those workers with a minimum seniority of 10 years. For the oldest, from 63 years, they are offered 20 days per year worked with a maximum of 12 monthly payments. For those between 55 and 62 years old, the bank offers 75% of the annual remuneration level and a special agreement with Social Security up to 63 years of age with an annual increase of 3%. Between 53 and 54 years, the remuneration level drops to 65%, but the special agreement with Social Security is maintained.

For younger groups, the calculation method changes. In the case of those who are between 50 and 52 years old, the bank offers compensation of six times 65% of the annual salary level, with a maximum of 320,000 euros. In addition, it has a special agreement with Social Security until the age of 63 with a temporary income of 15,500 euros per year. 2,000 euros of voluntary premium are added for every three years of seniority. An added bonus of 15,000 euros for difficult relocation.

Finally, for workers with less than 50 years of age and who do not meet the 10-year seniority requirement, the bank proposes 40 days per year worked with a maximum of 30 monthly payments. Again, it adds a voluntary premium of 2,000 euros for every three years of seniority and 15,000 euros for difficult relocation. If they are workers over 55 years old but do not reach the seniority of 10 years, the special agreement with Social Security is added until they are 63 years old with an annual increase of 3%.

Following this agreement, only the CaixaBank ERE is pending negotiation in banking. The positions of the parties in this case were more distant from the beginning and proof of this is that almost one more month of the talks had to be agreed upon, given the impossibility of reaching an agreement in a timely manner. At the meeting on Tuesday, the management has again raised a reduction in the number of affected to 7,400 people, 205 less than the last proposal and almost 900 less than the 8,291 extinctions initially raised, according to sources from the entity.