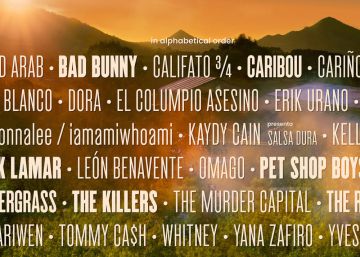 He Bilbao BBK Live He has released his poster for 2020 with about twenty artists. The festival, which will take place from July 9 to 11 at the Kobetamendi camps, has published the first list of names, including Bad Bunny, Caribou, Four Tet, rapper Kendrick Lamar, Pet Shop Boys, Supergrass, The Killers and The Rapture, among others.

The American group The Killers, which will also perform in the Mad Cool, the edition will be another protagonist, the Las Vegas band repeats in Kobetamendi and will arrive in Bilbao with a new album that will be published in spring. In addition, the veteran electronic pop duo Pet Shop Boys will make a stop in this city during his tour, where they will review and interpret the successes of his career.

The festival's commitment to urban sounds headed by Kendrick Lamar will also have another name on the rise, Bad Bunny, who won the last Latin Grammy with the award for Best Urban Music Album. The list of confirmations of the BBK Live poster also includes the return of Supergrass and The Rapture, Tinariwen's African folk blues, and state groups such as The Killer Swing, Leon Benavente and Hinds.