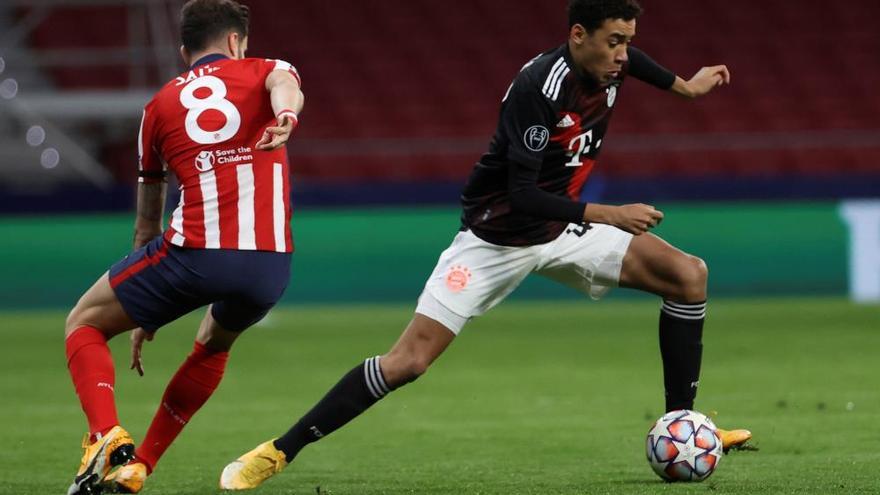 At minute 85, when he already felt the victory and the classification for the last 16 of the Champions League, winner 1-0 on the scoreboard and on the pitch, Thomas muller stormed the area, was shot down and transformed the resulting penalty to maintain the restlessness of the rojiblanco team, pending a 'final' in Salzburg on the last day (1-1).

The pass to the next round depends on a draw or a win against the Austrian team. There are no more combinations for the block directed by Diego Simeone, which perhaps deserved to have sealed it already this Tuesday, better during many stages and in the overall crash to a reduced version of Bayern Munich, but did not succeed.

The goal of Joao Felix nor the control he exercised during much of the meeting. It is true that it was not Bayern in all its expression. He didn't even come close. From start to finish leader of the group, with two days to spare, his visit to Madrid was a kind of parenthesis in the challenges that await him within the condensed calendar. To Kimmich's injury, unmatched in his position, he added the rest of Neuer, Lewandowski and Goretzka, on the list, and of Müller, Gnabry or Coman, in the eleven. Müller was decisive later.

Even so, it is not simple to bend him, no matter how much transformation in his lineup and as much as there is nothing at stake for him in the stake, as he demonstrated with the Hansi Flick lineup configuration. At the beginning, at Current athletic, bossy and possessive with the ball, deprived him of the ball, he closed the passageways and stopped him.

Nothing common this season, Atlético used to handle the rhythm of each duel, much more in the League than in the Champions, the best solution was once again Joao Félix. His football is an energetic vitamin for the rojiblanco team, because it concentrates the attention of his opponents, because he sees what no one intuits and because he overflows, as he did on the first occasion that Ángel Correa finished off weakly.

Also because at his side he is associated with a decisive precision and agility with his attack partners, because he amazes with the naturalness with which he assumes the leadership of the team at 21 years old and because he has the goal that his team so badly needs when they ' 9 'are not there. Neither Luis Suarez nor Diego Costa, both out.

"To the area, to the area", Simeone shouted insistently from the band, in the empty Wanda Metropolitano, every time his players tempted the attack, every time Joao, Correa, Carrasco led her, again in that double role that he demands his role as a 'laner', or Marcos Llorente, whose speed was unattainable for his opponents to the baseline, when he connected with Joao Félix for 1-0.

A repetitive goal in recent times, since Llorente's transformation into a vertiginous winger or attacker. The difference is that this time the strategy of a throw-in. In this sense, he leaves nothing to chance, Simeone, who senses in the smallest detail, in any game action, something with which to profit.

Atlético did it in the 26th minute. Not only was it an advantage for the rojiblanco team, with all that that entails in a duel of such magnitude for him, but also a blow for Bayern, surpassed by Simeone's group, without the control he had exercised until then in the midfield, where Musiala looked. At 17 years old, he has plenty of qualities to be the present and future of Bayern.

The party, in fact, Atlético had it under apparent control, who did not even consider taking any step back, He appeared in the opposite area with constancy, he was never satisfied with the minimum income and insisted on more than 1-0, although again without auction. Bayern, beyond the hour of duel, barely counted a single opportunity, but they have so many resources that not even that is an indication.

Not even the irruption of Gnabry and Müller in his opponent or the step forward of his rival or the apparently muscular injury of Giménez - replaced in the 68th minute by Felipe, then Héctor Herrera reappeared in the only two changes of Simeone - had altered Atlético until the Penalty committed by Felipe on Müller and 1-1, as frustrating as disturbing. He needs to tie in Salzburg.

Incidents: match corresponding to the fifth day of group A of the Champions League, played at the Wanda Metropolitano stadium without an audience.