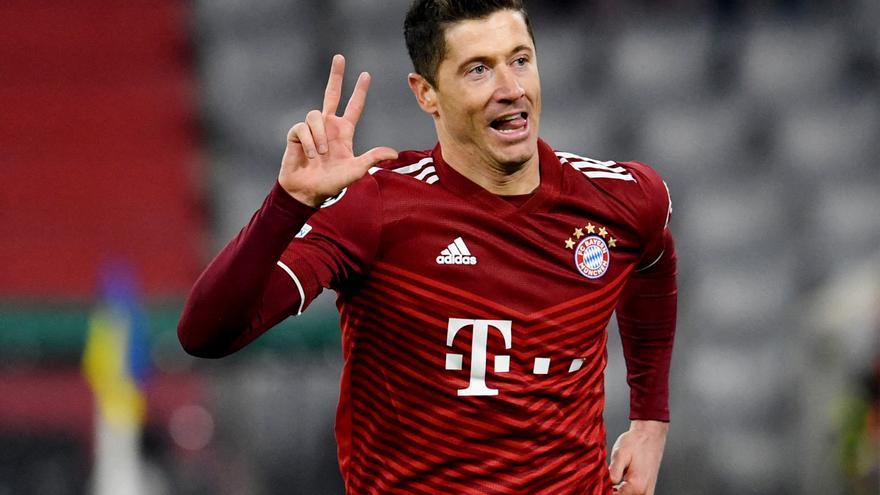 The Bayern Munich qualified for the quarterfinals of the Champions League to the beat Salzburg 7-1, with three targets Robert Lewandowski in the first 23 minutes, two of them from penalties, one from Serge Gnabry, two of Thomas muller and another of Leroy Sane.

Salzburg's dismantling began in the 12th minute when Lewandowski scored the first by converting a self-inflicted penalty. He was shot down as he was about to beat goalkeeper Philipp Köhn.

Before there was chances for both teamswith an aggressive Salzburg on the mark and that seemed willing to enter into an exchange of blows with Bayern.

In minute 2 Lewandowski had had a good chance. A few seconds later, Capaldo, through Adeyemi's cross, had come close to scoring for Salzburg.

Then Bayern began to have phases of control, to seize the ball and, after the first goal, despite a Seiwald chance for Salzburg that could have changed the course of the match, the Bavarian team ran over their rival.

He scored 2-0 in the 21st minute, again from a penalty. Again Wöber knocked down Lewandowski. The referee Justin Turpin first sanctioned a foul on the edge of the area, but the VAR corrected him. Lewandowski took the shot again and scored again.

In minute 23 came the third, again marked by Lewandowski after a duel with Köhn in the crescent. Thomas Müller, after recovering the ball, put in a pass to Lewandowski's run, Kóhn came out and managed to intercept the ball, but it bounced off Lewandowski's knee, crashed into a post and then the Pole only had to put a thigh to mark.

The party was already sentenced and Serge Gnabry scored the fourth in the 31st minute with a shot with his right leg inside the area to a pass from Kingsley Coman.

The last quarter of an hour of the first half was relatively quiet after the dizzying start.

The 5-0 came in the second halfin the 54th minute, with a left-footed shot from Müller inside the area from a pass from Leroy Sané.

Salzburg scored in the 70th minute, through Kjaergaard after a pass from Aaronson, against a Bayern they had slowed down significantly, although in the 83rd minute they made it 6-1. Müller scored it behind a wall with Sané.

Sané's goal was missing, which came in the 85th minute with a shot with his left foot after a spectacular back-heel pass from Lewandowski.

Incidents: second leg of the Champions League round of 16 played at the Allianz Arena in Munich.

Liverpool passes despite losing to Inter

The expulsion of the Chilean Alexis Sánchez alleviated the suffering to which the Liverpool at Anfield with the great goal of Lautaro Martínez and that ended up allowing the English to keep their clothes and close their classification to the quarterfinals (0-1, 2-1 on aggregate) of the Champions League.

The Chilean, expelled by double yellow after two hard tackles at the wrong timethe rhythm of his team was charged, which had put the 'Reds' in trouble, as in the first leg, and this time he did manage to pierce Alisson's door, with a whiplash from Lautaro

Liverpool, who crashed the ball twice into the post through Mohammed Salah, he advances to the quarterfinals and receives a serious notice that the Champions League is being a much tougher competition than the Premier League.

With the result of the first leg in their heads, Liverpool tried to be superior from their central defenders, Joel Matip and Virgil Van Dijk, who allowed them to live with the peace of mind that the defense was covered. From there Liverpool flowed, because the Inter I wasn't uncomfortablebut every time Alexis and Lautaro faced the 'Red' defense, they came face to face with Van Dijk's wall.

The Italians inhabited a desperation that caused that, by their own weight, the occasions of a Liverpool with much more quality arrived. All of them, yes, did so from the boots of Trent Alexander-Arnold, who served a cross so that Matip crashed into the woodwork and another so that Skriniar headed Van Dijk on goal. The English winger, the catalyst for danger, was able to close the first half in the best possible way, with a free kick perpendicular to the goal that went off licking the post.

Liverpool spent the first 45 minutes too calm for what was at stake, for what an Inter that does not step on the quarterfinals of the Champions in a decade needs. It even came close to 1-0 when Salah, on a dead ball inside the area, with Handanovic on the ground and two players under the sticks, ran into the woodwork.

And there the Italians took a step forward, with the movements of Alexis and the anger of Lautaro. The Argentine, tired of unsuccessfully trying to dribble past Van Dijk, got rid of all his frustration in the 60th minute, took the ball from the edge of the box and smashed it against the Dutch centre-back. Straight to the squad. Just a few meters from the Italian fans, who exploded for a minute and a half.

The Chilean dynamited his team and caused that last half hour, which would have been hell at Anfield, to be little more than a few embers. Salah was able to put them out, but a volley of his, aesthetically beautiful, went to the post

Liverpool, with less superiority in the two games than that shown in the Premier, advances to the quarterfinals for the fourth time in the last five years, with the toll of having lost at Anfield for the first time this season; Inter will have to keep looking for that last boost that will allow them to fight against the biggest. This time, at least it was close.

Incidents: Match corresponding to the second leg of the Champions League round of 16 played at the Anfield stadium (Liverpool).