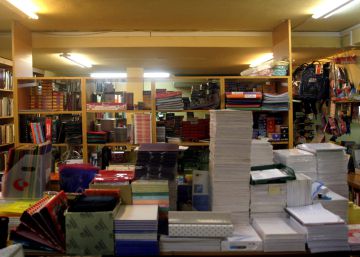 The National Association of Teaching Books (ANELE) has denounced the "bastard mechanisms" used by the autonomous communities to make textbooks "say what they want and not what science says ", as well as "unfounded" regulations that force 51,528 titles to be placed on the market among those dedicated to manuals (11,381), workbooks, teacher books and complementary materials. This was stated this Thursday in Madrid Antonio María Ávila, executive director of the Federation of Publishers Guilds of Spain (FGEE), when presenting the report on the educational book in Spain for the 2019-2020 academic year, in which the price of the manuals will increase by 1% on average.

Avila has criticized "the null respect for the freedom of professorship" that the advisors of "all autonomies" exercise to achieve their purposes and ensure that the textbooks "the rivers disappear, as in the case of the Canary Islands", so that the count of Barcelona Wilfredo el Velloso is "Wilfredo el Piloso but do not talk about the Catholic Monarchs "(Catalonia) do not mention the Catalan-Aragonese crown, which" does not appear in any text of the Middle Ages because it does not exist. "

Asked the Ministry of Education and FP for these statements, precise in writing. “In Spain, as in almost all European countries, there is no prior authorization system for textbooks by the educational administration (the ministry). It is the responsibility of the authors and publishers to adapt to the necessary scientific rigor and the curriculum of each autonomous community. "And insists that it is" it is normal for publishers to maintain relations and conversations with the agents of the educational community and with the regional administrations "but which ultimately" are those responsible for the quality and adequacy of the materials produced. "Education also recalls that it is the educational inspections of the communities responsible for the supervision of the manuals, although the ministry"It always maintains an attentive attitude to the teaching and learning processes that are developed in our educational centers ”.

In addition, Ávila has criticized that the Valencian community wanted to sanction a director of the RAE (Fernando Lázaro Carreter) in his day for saying in a language book that the Valencian was a dialect of Catalan and stressed that "surrealism" also reaches to the books of FP, where the discrepancy focused on the "explanation of the operation of a gearbox" (Castilla-La Mancha). And they denounce that these pressures are linked to the elaboration of 450 regional norms in the last three years that "extend the territorial differences between the students" and give rise to 51,528 titles (33,222 in paper support in all official languages ​​and 18,308 in digital format ).

For this reason, the president of ANELE, José Moyano, claims a pact for a homogeneous common sense curriculum "and recalls that the publishers must comply in each community when preparing educational materials the current regulations that" should be based on knowledge
scientific and respect ". In addition, Moyano has revealed that in some communities" the filter of curricular adaptation control must be passed to access aid models. "

Moyano has referred to the differences in a subject "as neutral" as Natural Sciences and has wondered why healthy eating is in the curriculum of Murcia and not in La Rioja or why in some places some concepts have to being in unit 2 and others in 6 or even taking a different course. "

Both Moyano and Ávila have ensured that the lack of an educational pact "increases the inequality gap of students between communities", also reflected in the policies for providing resources to schools and aid for the acquisition of school supplies, which they receive 54% of the students.

With an average expenditure per student of 98.10 euros in the 2018-209 period, ANELE emphasizes that the investment per student for the acquisition of material this course ranges between 108 euros in Andalusia, which has a universal loan system, at 5.74 of Catalonia, which applies direct aid to vulnerable families. In this regard, he stressed that the aid system also influences the renovation and updating of educational resources, which most communities leave to the centers.