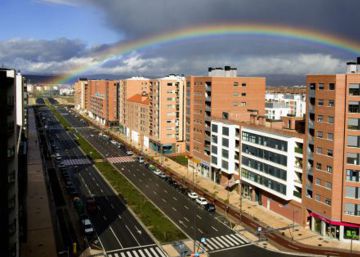 The Basque Government and the Asset Management Company of Banking Restructuring (Sareb) have signed the purchase of nine floors for 742,000 euros to integrate them into Alokabide, the regional social rental agency. It is a small operation in volume but very significant, since the Basque Country becomes with it the first autonomous community that buys housing from the so-called bad bank.

The nine homes were already assigned to Alokabide through an agreement signed in 2017, but now they will become the property of the autonomous community, the buyer and the seller explain. The acquisition is part of a mega-purchase of housing by the autonomous community. As reported by its Department of Housing, the operation reaches 506 floors and involves an investment of 50.1 million euros. Sources from that department explain that the surplus recorded in the regional accounts, the higher income received from the Treasury and the Sustainable Financial Investment fund, “which does not count as debt”, have allowed the disbursement.

Many of the resources allocated will remain in any case in the autonomous entity since most of the homes, some still under construction, belong to Visesa. This company is the public developer to build protected housing in the Basque Country. As in the rest of Spain, traditionally those apartments were sold to individuals, but the reorientation of housing policy it establishes that the protection is destined to the rent. Therefore, the Basque Government has decided to acquire the apartments and incorporate them into its park for lease, which thus reaches 7,811 floors.

For Sareb, a new route for the sale of assets is opened. The well-known as bad bank, in which most of the toxic brick that the bank had coming from the real estate bubble was concentrated, has signed agreements with nine autonomous communities to transfer floors and rent them. But none so far had taken the step of buying these properties, an option desired by the managers of the society: “We are talking with several communities,” sources Sareb said.

Basque Country is the community where, in terms of business, the operation for Sareb was less interesting. Due to the scarce assets of the bad bank in the Basque territory, only 10 floors were ceded to the Autonomous Government. Nine are the ones he has sold now and the one that is being traded is being negotiated.

It is a small volume compared to the 400 floors of the bad bank that Andalusia manages in lease, the 930 that Catalonia has transferred or even the 50 of Galicia. With this last community, the conversations are very advanced and a sale to the Xunta could be signed “in weeks”, Sareb sources indicate without specifying more details about the volume or amount of that operation. Other communities that also rent apartments from Sareb are the Balearic Islands, the Canary Islands, Cantabria, Castilla y León and Extremadura. Among the Town Halls, the one in Madrid has 300 floors and Barcelona with 200.