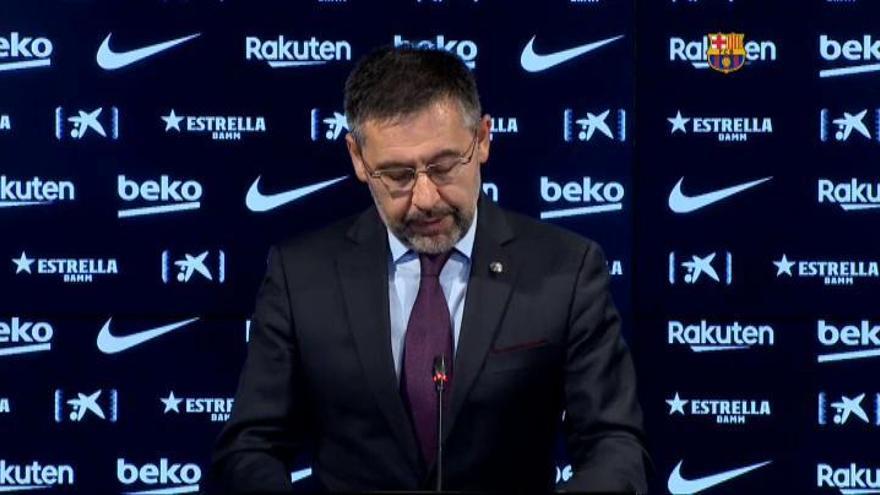 Y Josep Maria Bartomeu surrendered. After months and months of resistance, clinging to the position of president of Barça that the partners gave him in July 2015, he finally raised the white flag. He resigned. And the board also resigned en bloc, so there will be no vote of no confidence, which was scheduled for November 1 and 2. Nor within two weeks, as the club wanted. The first motion of the three that the Barça.

Bartomeu leaves wrapped in a chaotic end, full of scandals, also a victim of 2-8 in Lisbon, with the team in ruins and the club facing one of the worst economic crises in its history, a product of mismanagement in the last five years, coupled with the devastating impact of the coronavirus.

Just 24 hours after proclaiming that “there were no reasons for resignation”, Bartomeu gave up. He did not even want to fight in the vote of no confidence, driven by 19,380 partners, who gave their signature to evict him from the box in the middle of a pandemic in a storm that even he could not foresee.

Tried the already ex-president convince the Generalitat to give it 15 more days to execute the vote of no confidence. But the Government was inflexible and Bartomeu, after stretching the game until added time and no longer legal loopholes to stay in office, gave up.

Appointment with the polls in January

Now a panorama full of uncertainty at the Camp Nou, a management committee, chaired by Carles Tusquets, taking command of Barça, which “will have up to three months” to call the elections that must elect Bartomeu’s successor.

At the beginning of January it already appears as the first date for the new president to have the ability to maneuver over the winter transfer market, which ends on the 31st. There is already a list with several candidates, some already official, others not, preparing the next appointment with the polls for an economically broken club and in the process of sports reconstruction.

From Víctor Font, who has been designing his project for seven years, to Joan Laporta, the former president who has not yet said if he will join the electoral race, passing through old acquaintances such as Agustí Benedito or Toni Freixa, in addition to Jordi Farré, the promoter of the vote of no confidence that he won even without the need for it to occur, Lluís Fernández Alà and Xavi Vilajoana, manager with Bartomeu who could emerge from the flames of the already resigned board.

Other routes remain, but they seem less explored, such as Jordi Roche’s, sponsored by Sandro Rosell, the former president, although it is losing more and more strength. Or even that of Emili Rousaud, the vice president who left Bartomeu’s board with five more managers in the first months of the pandemic.

Not forgetting another Rosell, Juan, former president of the Spanish business association (CEOE), who meditates immersing himself fighting to sit in the Camp Nou box.

A chair that Bartomeu has left empty. Six years, nine months and four days has lasted his mandate. It happened to Rosell, who resigned for the ‘Neymar case‘after announcing 48 hours before that he would not. Even in that, the process of the former president has been identical. But it has lasted even less. Just 24 hours.

He leaves before he is unable to finish his second and last term. He leaves like Laporta in 2010, unable to articulate a continuation candidacy. He leaves, or is fired, because he did not detect that “the sports crisis”, as he described it after 2-8 in Lisbon, was, in reality, an institutional crisis that would take him away.

Berlin, the beginning of the end

He leaves, or they throw him out, because did not understand that Berlin-2015, just before the elections that he later won, was his ceiling. And, at the same time, the beginning of the end. He leaves because he has lacked any sports ideology. He wanted to be a cruyffista, but he wasn’t. Nor had it been. Rather the complete opposite. He first denied that philosophy, which he later tried to get close to.

He burned five coaches (Tata, Luis Enrique, Valverde, Setién and now he leaves Koeman) in six years with the same voracity with which he was consuming sports directors. Also five (Zubi, Robert, Pep Segura, Abidal and now Planes occupies that position), but in only five years.

He leaves before exposing himself to be the first president to lose a vote of no confidence (Núñez won it in 1998 and Laporta also triumphed in 2008), dragged down by a succession of internal scandals that have been undermining his credibility. And he has lost it without even needing the polls to be opened.

11 managers have left him, including six vice presidents, the ‘Barçagate’ has exploded in his hands, the crisis of social networks, an issue that Jaume Masferrer, his personal advisor, had to control. And Neymar left (August 2017), the flag first of ‘Rossellism’ and then of ‘Bartomeumism’.

Bartomeu did not find out that The Brazilian, destined to be Messi’s replacement, had been plotting his escape for months. A flight that was the origin of the sports chaos (Dembélé, Coutinho, Griezmann …) coupled with the economic disaster.

A fortune (he received 222 million euros from Paris SG) thrown out the window as if it were the modern version of that Gaspart, who in 2000 when Figo flew to Florentino’s Madrid, returned to the Camp Nou with Overmars and Petit.

Faced with Messi and the squad

Claudica Bartomeu faced the changing room in such a way, symbolized in his disagreement with Messi, the captain with whom one does not speak, despite the fact that he had given him everything. All is all. Less chemistry and feeling.

He did not have with Messi. Nor did he connect with the squad. He never connected with them, who saw him as a foreign body, devoid even of the power it should have. It was the president. And he had to exercise as such.

But they did not see it that way from the sports city of Sant Joan Despí, despite the fact that Bartomeu pleased the players (Leo, the first), with galactic renovations, sky-high salaries, which now in the post-pandemic market was desperately trying to cut, and long contracts without caring that they were over 30 years.

The former president lived so up to date that the future was always yesterday. He, two months and two days after Messi’s burofax, left; Leo stays. At least until June 30. He leaves without being able to see a single crane at the Camp Nou to start Espai Barça, his flagship project, approved by referendum by the partners in 2014.

But it remains, for the moment, a beautiful model of the stadium. And nothing more. Yes, the Estadi Johan Cruyff has risen. No sign of the new Palau Blaugrana.

And Bartomeu surrenders With an empty box, all the financial resources to support a squad that eats up 70% of the club’s budget have been exhausted, subjected to terrible financial stress from the pandemic. Not one euro leaves the former president, as was clear when the club announced a surplus for this season (20-21) of one million euros. In the best case.

He didn’t know it then. Neither in Berlin, which was the peak of his success (triplet and trident, the slogan of his electoral program in 2015), nor in Lisbon where his mandate really ended.

He thought that swapping Koeman for Setien and rejuvenating an exhausted and tremendously expensive squad would be enough. It did not count on Messi’s burofax or popular discontent, expressed in a transversal way, without media leaders at the fore. A lethal combination for Bartomeu.

At night, and with the team in Turin, about to play this Wednesday the second game of the Champions, Bartomeu leaves a desert Camp Nou, which the partner has not stepped on since last March due to the pandemic.

Six years, nine months and four days ago it was Rosell who left the box and emotionally embraced his friend, transferring the presidency to him. He, on the other hand, no longer has someone to hug. Nor can it now be in the middle of a pandemic.

He leaves empty-handed. The trident disintegrated. Neymar first; then Suárez and Messi remains, but against his will. And with a blank season he resigns. He leaves in silence, fighting with the Government of the Generalitat, denouncing “partisan interests”, exhausted from resisting so much. He was able to resign many times before, but he chose the way of denying himself, a portrait, perhaps, of what Bartomeu has been.