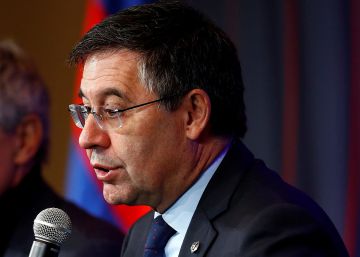 When the Christmas break was reached, from the sports area of ​​Barcelona they were clear that Ernesto Valverde I would continue as a Barca coach because they understood that the management of the costumes was excellent and the game did not engage although it served to express the supremacy in LaLiga. But consummate the defeat against Atlético in the Spanish Super Cup, everything changed overnight. Decision propitiated by a directive that, however, reaffirmed after the consecutive disasters in Europe, two unexpected eliminations, first against Rome and then against Liverpool. Thus, Valverde was fired on Monday in a bad way and on the run, because they negotiated with other technicians without closing his dismissal and by little they do not remain orphans on the bench, since Xavi and Koeman refused to assume the team with the competition underway and with commitments to their current teams. “It is true that the loss of the Super Cup has ended with consequences that coaches have trouble accepting, but Ernesto’s work and how he leaves the team is appreciated,” Setién slipped, his relay on the bench.

President Bartomeu tried to deny the facts, the same one that a few weeks ago expressed that the important thing was to win before the good game. “For a long time we knew that the dynamics of the team were improved, even though the results are good, leaders and in the eighth Champions. We had talked many times with Valverde from the sports area as from the board, which had many things to improve. So it is not a surprise for Ernesto, ”he started; “We have made the change now because we are in the middle of the season and we wanted to give a boost to end the season. A boost that we think is to aspire to the League, the Champions League and the Cup. ” And, in passing, he sent a message to Valverde: “Thank Ernesto for everything he has done. It has been a very close relationship, which has made us improve and we have enjoyed. We have won and we must thank you. ”

But it was not enough. There was no turning back and he signed Setien as a relief for a Valverde who said goodbye Tuesday to the Barca dressing room. “I have lived very happy moments celebrating victories and titles, but also other hard and difficult ones. But above all I want to highlight the experience and affection I have felt from the fans, ”he wrote in his farewell letter Valverde, correct until the end because he added:“ I want to thank the president Josep Maria Bartomeu and to the board the opportunity they gave me to lead this team and their confidence during all this time. ” Which has not been the case and is now expressed with the signing of Quique Setién, 61, for the Barça bench until 2022. “Ernesto has said goodbye as he is, a man,” Bartomeu resolved; “Of course I would have liked things to go differently. The way of being of the directive is not this. In recent weeks we have talked to many coaches, it is the obligation of the sports area. Also with Quique. The work was done and that’s why it was at this time. ”

Valverde went to the sports city in the morning to say goodbye to what his team has been for two and a half years. “He is a technician loved by the costumes, for how he has always treated us and for how he has managed to manage the good and bad moments,” explains an authorized voice of the costumes. Although from the club they filter that they were not very satisfied with their way of working, too condescending to the dressing room and little demand or discipline. Manual, in any case, which he applied from day one and which has given him two Leagues, a Cup and the Spanish Super Cup. “I am convinced that I can convey many things that I like and that can be done better for a long time, not only with Valverde. If I thought everything was fine … ”, said Setién. Although he added: “Ernesto has always seemed to me a correct person, I greatly appreciate the work he has done, his way of being, his principles… I have talked to him and I hope we have contact because there are many things of his work that will come to us very good. Among other things because it leaves me a team that goes first. ”

That should have thought the directive, which led to the first dismissal of a technician during the season since 2003, when Van Gaal was fired and, just a few days later, so did President Joan Gaspart. “Last year there were a lot of requests not to follow. I have always trusted him and so we told him to continue on the project. We are friends because of their way of being. But in recent weeks, the dynamics were not very good. We talked about it and decided to give the team a boost, ”Bartomeu insisted, far from clearing things up as neither did Abidal, always with the smile ahead. “We have done a great job because the board needs answers to your questions. Each coach has a plan, a way of working, character, image … We have to think about the project. And Quique is here because we like his philosophy, his way of working and we have full confidence in him. For us he is the perfect coach, ”he resolved. The same as he said about Valverde.