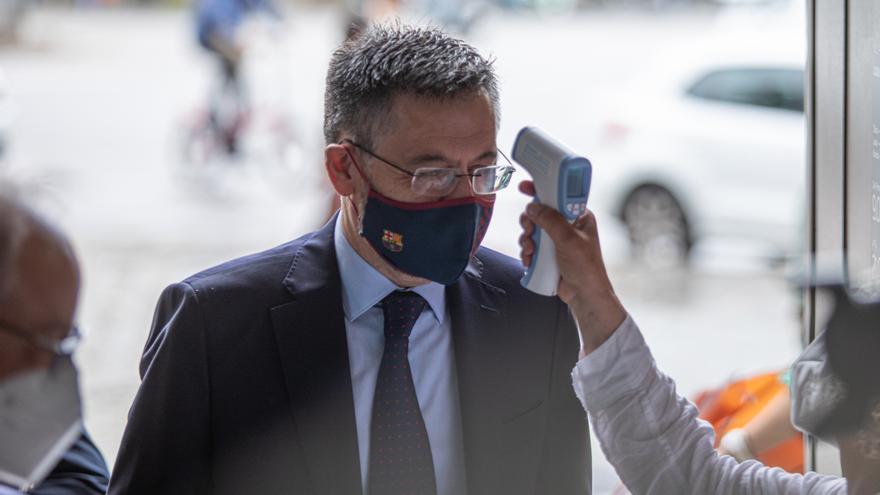 The former president of the Barcelona Josep Maria Bartomeu and its board of directors encrypt at 225 million euros the impact of the COVID-19 in the accounts of the Barça club during the 2020-2021 season.

This is what they specify in a statement sent to the EFE Agency in which they question some of the economic criteria used by the ‘due diligence’ that the current club general director presented last week, Ferran Reverter, who described the management of the previous meeting as “disastrous and improvised”.

According to Bartomeu and his team, to determine the true incidence of the pandemic in the club’s coffers, the guidelines of Royal Decree 1162/2020, of December 22, must be followed, which establishes special conditions for the application of the regime. compensation of guarantees on sports corporations, to face the impact of COVID-19.

And that establishes that “for the purposes of calculating the amount of the guarantees, negative economic results will not be considered, in the years affected by COVID-19, the negative variations in the accounting net worth of professional clubs directly linked to the economic impact of the COVID-19 “.

Following these guidelines, the outgoing board understands, therefore, that “the most objective formula” to calculate this decrease in revenues in the 2020-21 season is to compare them with those obtained in the last season closest to the time when there was no COVID, that is 2018-19.

From one season to another Camp Nou revenues fell by 187 million; commercials, 57 million; those of the media, 16 million; and those obtained by the transfer of players, 70 million. That is to say, that Barça stopped entering 330 million for those concepts.

In addition, the note figures the reduction in expenses due to the pandemic at 105 million, and not 125 as the current board reflected in its audit, since Bartomeu and his executives consider that there was also an increase of 20 million in derivative financial costs. of the pandemic. Therefore, the COVID impact of the season would be 225 million euros.

The statement also qualifies some interpretations regarding the 263 million provisioned by the board of Laporta: 79 of them correspond to pending litigation and another 24 million, in principle, “to a non-payment of the contract by Nike, sponsor and supplier with which it is already negotiated so that, within the probable agreement, this money, or part of it, they can be returned as a benefit, “says Bartomeu.

Deterioration of some players

The previous meeting stops more extensively in the 160 million game due to the deterioration of some players in the squad: “This reclassification and valuation accepted by the auditor, although atypical, is lawful, but the responsibilities and derivatives are assigned to the manager that executes them. Both for losses and gains, if they occur, when the transfer is made. ”

“In this sense, it is striking that in the budget 21-22, in the transfer profit items there is an increase of 25 million (44% more) where the Griezmann and Trincao operations closed between July and August of 2021 “, adds the note.

For this reason, Josep Maria Bartomeu and his board consider that the result of the season 202-21 would have been “very different” had COVID not existed and only the usual provisions would have been applied, without atypicals, maintaining the same tax credits indicated in the audited accounts.

And it is that those 555 million would have to be subtracted from the 225 of the COVID impact, the 263 million of the atypical provisions and the 17 million of tax credits, according to the criteria of the previous management team.

The statement also recalls that the current board of directors has advanced the accounts to the commissioning members informing them that the club’s net debt as of June 30, 2021 is 680 million euros. And that, taking into account that the total investments made in the development of the Espai Barça is 122 million euros, the adjusted debt is 558 million euros.

“Serve the data for deny the interpretations and information that have erroneously used the figure of 1,350 million of net debt, and that, as it is clarified in the audit notes, the club follows under the accounting principle of ‘Company in Operation’, and in no case of risk of liquidation and dissolution “, need Bartomeu and his team in their presentation.

“And to finish, we agree with the current board of directors, that despite the terrible impact of COVID in the last 18 months, the club is alive and has assets, brand, land, content, stories and support from our sponsors, financial entities , suppliers, employees, partners and culés of the world to get ahead with success and reinforced of this difficult stage. Visca el Barça! “, conclude the ex-president and his board.