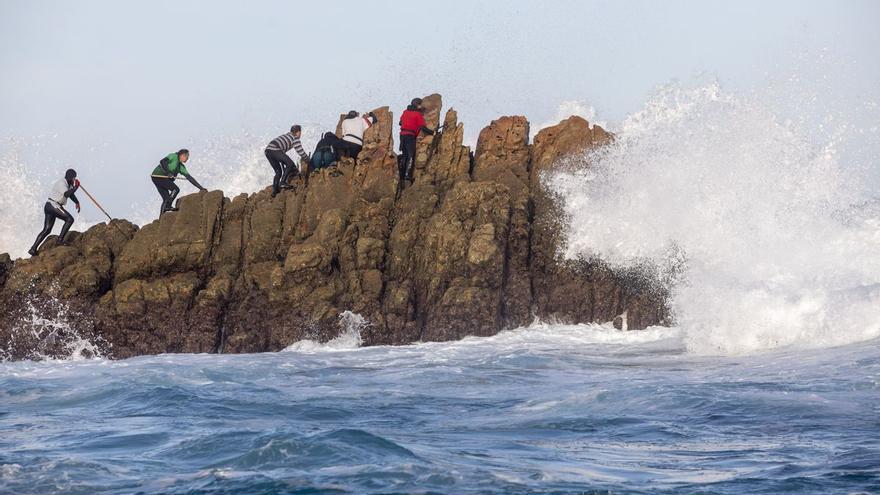 Although these professionals take away some iron: “How many serious accidents are there of barnacles?”. Fortunately, few. It’s not by chance. Although they are not free to suffer mishaps, and there are, there are, the shellfish men know the environment in which they work like no one else. On land they are colleagues, at sea they are also brothers.

In boats they approach the rocks. They call each rock by its name: ‘el Placerín’, ‘la Llaneza’, ‘El canalón’, ‘Baxón’…. That also goes in the office. They take advantage of the journey at considerable speed to catch up. One has been a father recently. Another has in mind to expand the family. As you go along Cape Peñas there is a silence that sharpens the roar of the sea. They are in the middle of nowhere: they and the sea.

They feel privileged to be there: “How handsome this is!” Exclaims one. The rest agree. THE NEW SPAIN accompanied them on the opening day of the campaign in Peñas.

Barnacles on the rocks of Peñas. Ricardo Solis

Berto, the pilot of the boat, brings them closer to the rocks in a kind of dance with the sea. Almost a ritual. And the hard work begins. Some of them hang sacks to which they throw the barnacle around their waists; Others put t-shirts on top of the neoprene that they tie with a belt, and between a T-shirt and a wetsuit they throw the barnacles that they then “stop”.

The helmet is also essential for many professionals who they punish their bodies at a blazing speed against the best rocks on dangerous terrain, although not all carry it. At work they sculpt the rocks, almost like artists who pamper pieces.

They focus on the rock and the sea: “A (wave) is coming!” Shouts the boatman. And the fishermen cling to the rock, or they jump into the sea to avoid the Cantabrian blow. At work time, barnacles jump from one stone to another with ease, like a kind of ‘Spiderman’ at Cape Peñas. These Asturian superheroes have a secret: they never turn their back on the sea.

The barnacles, meanwhile, are picking barnacle pine cones, those sea bites that are listed on the rise in Asturian markets and are in high demand, especially at Christmas. Not all are the same: on the same rock there are two groups of barnacles, those of the sun and those of the shade. The former are directly exposed to the waves, they are short and thick and their coloration is dark, their meat is tough and more tasty.

Shady ones live on sheltered faces or in crevices, generally competing with mussels. To stand out above these, they develop a lot in length and, although they also do so in thickness, internally they are made of soft meat and with “a lot of water”, as explained in the book ‘Fishing Resources of Asturias 2’.

The precious delicacy, ready to return with him to port. Ricardo Solis

With the bags –or the T-shirts– full of barnacles, the shellfishmen return to the boats where they clean the precious shellfish of stones or any other impurities that reduce their fishing capacity. Arturo Menéndez, ranger of the Luanco brotherhood, weighs their catches.

They have reached the maximum, eight kilos. Those who rush to reach the limit will play it again on the rocks. A rough wave makes them put themselves in their place: “It wants to eat the sea!”, Berto exclaims.

It is time to return to port. Most will sell their catch in the afternoon in the rula that interests them the most, generally Puerto Vega, the barnacle capital of the Principality. Those of Luanco will barely rest enough to return to the sea: “This is the most handsome job in the world”, acknowledges Abraham Mazuelas, with two higher-level training cycles that one day decided that his working life would hit the sea. Asturians’ fondness for shellfish is lost in time.

The prehistoric sites of numerous Asturian caves, near the coast, show how our ancestors, more than 25,000 years ago, already practiced the art of shellfish collecting lamps in great abundance.

The art of digging barnacles has hardly changed over the times. “It’s life, it’s adrenaline,” admit those from Peñas, who in just a few hours bring the flavor of the Cantabrian from the rock to the plate. Although for that they have to risk their lives. In this they also share something with ‘Spiderman’.