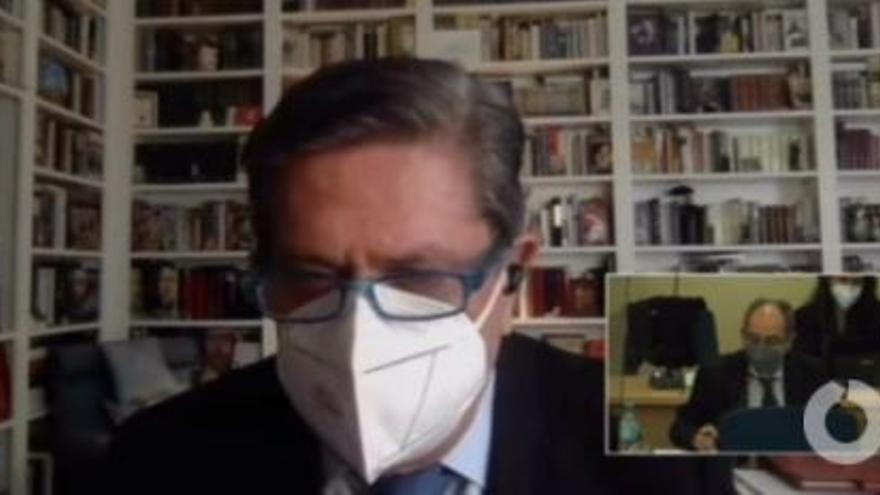 The last of the members of the Popular Party leadership to testify as a witness in the trial of box B, Federico Trillo, left a novel argument to deny the irregular financing that the judgments of the National Court and the Supreme Court prove: Luis Bárcenas he never admitted that parallel accounting while he was coordinator of the defense of the defendants of the party in the Gürtel case. Between 2008 and 2011, Trillo was the coordinator of Justice of the PP, a time that coincides with one of the most intense periods of sabotage to the judicial investigation by conservative training.

"Mr. Bárcenas never admitted for a single second that there was a box B of the PP," said Trillo, who has once referred to when the ex-treasurer denied the veracity of the papers in the hours after they were published. Bárcenas has repeatedly explained in the last eight years that he lied because he thought that it benefited him in his defense strategy in the Gürtel case, for which he was later sentenced to 29 years in prison. The last time he has expressed himself in these terms has been during his statement in the present lawsuit of box B.

In Trillo's presentation, the statement that not only he but also the examining judges of box B gave relevance to the annotations that refer to him as a recipient of bonuses from that box B has also stood out as novel. The politician and lawyer It is obvious that the collection of black money bonuses was never the object of the investigation because it was a tax offense prescribed when it started and that his appearance at the trial aims to clarify other issues that are the subject of the same. The parallel accounting of the PP reflects payments to the former Minister of Defense during Aznar's second Government of 203,286 euros between 2000 and 2006. In Bárcenas' papers deliveries are attributed under the headings of "Federico" and "Federico Trillo". " Nobody in the PP calls me Federico ”, he said this Thursday in reference to the name with which Bárcenas wrote down the deliveries of black money for him.

Nor was that the last innovation in terms of the testimony of a former leader of the PP that the former defense minister left. The contempt for Bárcenas' papers that his colleagues had previously expressed acquired a new dimension in Trillo, who said that he did not worry about knowing the manuscripts until 2018, five years after their publication, and because he was called to testify to the commission of Congressional investigation.

It was Trillo himself who brought up one of the darkest episodes of his political career, the Yakolev accident in which 62 Spanish soldiers died returning from a military mission while he was Minister of Defense. The question was relevant because Bárcenas explained to Judge Ruz, in the investigation phase, that part of the money entered in the name of Trillo would have been used to pay for the defense in the Yak-42 case. Trillo has denied it today and has said that this defense was paid "cleavage" among the accused. "A lot of pain has been caused and has caused me," he added on the matter of the Yak-42.

Rato: The papers are false "as far as me"

Before Trillo had declared Rodrigo Rato, also as a witness. Rodrigo The former economic vice president has assured: "As for me (Bárcenas' papers) are false". According to this parallel accounting, Rato would have received 216,711 euros in quarterly and semi-annual payments between 1997 and 2004 when he was deputy secretary general of the PP and economic vice president with Aznar. At Gürtel's trial, where he appeared as a witness, he said that those notes had "nothing to do" with him and that he never received that money. However, the papers collect more than 15 annotations with the designations "R", "R. Rat." or "Rodrigo R." or "Rodrigo Rato".

This morning, Rato said: "I have not received any remuneration from the PP since the year 89 that I began to receive it from the Popular Parliamentary Group." Rato has added that he maintains a "cordial" relationship with Bárcenas, with whom he shared a module in the Soto del Real prison, and has specified that he "never" worked with him. Asked by the lawyer Virgilio Latorre if he considers that Bárcenas was delirious, as was said yesterday, or if his bosses had a good opinion of him, Rato said: “If he spent 20 years as manager, the people who worked with him should have a good opinion of him. he".

For his part, the director of El País, Javier Moreno, explained in the trial of box B that his media took four days to publish the 'Bárcenas papers' once they were received because, among other verifications, he commissioned an expert examination graphologist who found that it was the letter of the extesoreor and that the manuscripts did not constitute "a unit of act", that is, that they had been written over time and not manufactured at once. The prosecutor in the case, Antonio Romeral, who had not asked Aznar or Rajoy the day before, and neither did he this Thursday with Rato and Trillo, took the floor to inquire about the checks carried out by the newspaper, to make sure that the media handled photocopies and ask if that did not affect the expert study, an end that Moreno denied.