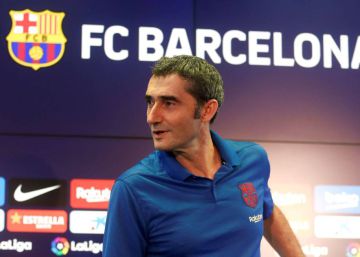 The injury of Lionel Messi in the soleus of the right leg disrupted Barcelona, ​​especially after Luis Suárez suffered the same problem as the Argentine. The good news for Ernesto Valverde is that the Uruguayan striker has recovered and, in principle, could participate in the duel against Valencia, this Saturday at the Camp Nou (9.00 pm). "We believe that Luis can be there," said the Barca coach. “Messi’s low is always going to be noticed, but there are players who have to step forward. Griezmann did it to Betis and we want it to have more continuity, ”said Txingurri.

He does not want to risk Barcelona with Messi, especially after the Argentine suffered from the injury. "I was fifteen days and when I thought I was fine, in one of the training sessions before Betis I resented a little and it opened a little more," he explained on 10, in an interview with Diario Sport. "I am not a doctor, it seems that Messi opened a little scar and we have gone with a little calm," said Valverde. The Barcelona coach still does not know if he can count on the Argentine at the premiere of the Champions League, next Tuesday against Borussia Dortmund in Germany. "I see it difficult for Tuesday, although it is already in time to return," he said.

After reaping a defeat (Athletic), a victory (Betis) and a draw (Osasuna), Barcelona receives a Valencia headdress, after Peter Lim, owner of the club, dismissed Marcelino García Toral. The Asturian coach had created an invincible team for Barça last season. “It will be a similar game, although it has changed coach only two days ago. It comes from a time of good results with Marcelino, they have not had time to change many things. It put us in trouble last year in all three games, especially in the Cup final. A classic 4-4-2, lines close together and against, ”Valverde concluded.