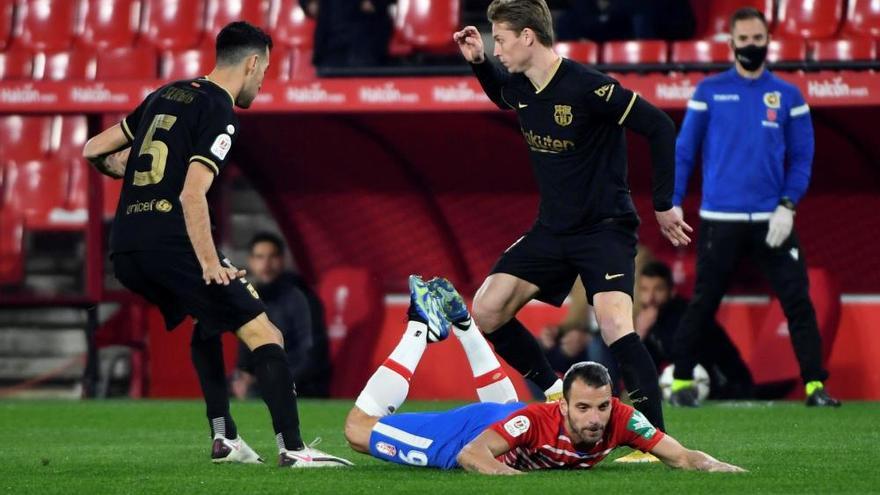 The Barcelona met the predictions and qualified this Wednesday, although with a lot of suffering, for the semifinals of the Copa del Rey by winning in the quarterfinal crossing, played in a single match at the Nuevo Los Cármenes Stadium, by 3-5 to the Pomegranate in a match that it was decided in extra time after finishing 2-2 in regulation time.

The home team reached the 88th minute winning 2-0 thanks to goals from Brazilian Robert Kenedy in the first half and Roberto Soldado at the start of the second, but Barça forced extra time with a goal from French Antonio Griezmann in the 88th minute and another by Jordi Alba in added time.

Griezmann finished the comeback visitor in the first part of the extension and Fede Vico tied again by converting a penalty into a goal, while in the second half of overtime the Dutchman Frankie De Jong and Jordi Alba again signed the final 3-5 and the pass to the semifinals of Barça

The Barcelona coach, the Dutch Ronald Koeman, took the game very seriously and only made three changes compared to the last league match against Athletic Club, which were the entries in the eleven of Sergi Roberto, Sergio Busquets and the Portuguese Francisco Trincao, in addition to keeping his starting goalkeeper, German Marc Andre Ter Stegen, in goal.

On the other hand, the Granada coach, Diego Martínez, tried to refresh his starting eleven due to the load of matches accumulated by the team and introduced up to seven novelties in relation to the previous match against Celta, including the return to the goal of Aarón Escandell , a regular substitute for Portuguese Rui Silva and that this season he has only played in the Cup.

The Barça team clearly dominated the clash from the start, at times putting the Andalusians in his area, and in the first ten minutes Aarón had to save his team up to three clear occasions against the Uruguayan Ronald Araujo, the Argentine Leo Messi and the Portuguese Francisco Trincao.

Granada was not able to extend its possessions, but it scared Barcelona in the middle of the first half with a header from Antonio Puertas that left very close to the culé goal.

Barça responded with a free kick from the edge of the area, very well launched by Messi, which again forced Aaron to intervene correctly, who shortly after returned to keep the ball after another shot from Araujo.

Although the visiting domain was constant, the passing of the minutes brought with it the improvement of Granada, who in the 31st minute took advantage of a loss of the ball in a dangerous zone by Frenchman Samuel Umtiti so that Kenedy will score 1-0 after a perfect assist from Alberto Soro.

Kenedy himself took advantage shortly after another defensive error by Barcelona, ​​in this case by Araujo, to mount a quick personal move that ended with a bad shot.

The visitors pressed again in the final stretch of the first half, with a distant last option from Sergi Roberto that hardly put Aarón in trouble.

As soon as the second half begins 2-0 arrived, marked by Soldier after a sensational move into the space by Ángel Montoro, beating Umtiti in the race and beating Ter Stegen in hand-to-hand.

With two goals down and one foot out of the Cup, Barcelona had no choice but to turn over the local goal with almost 45 minutes still ahead, although it did not find the spaces that it had found in the first half between the local defense and the speed of their combinations was less.

Messi wanted to lead the reaction of his own, but he ran into a paradón from Aaron, at game time, and then his sensational pass to Trincao ended with a shot from the Portuguese that crashed into the crossbar.

Koeman tried to revitalize his team with the entry into the field of the French Ousmane Dembele and the Danish Martin Braithwaite, but the Catalans had many problems to break the almost perfect rojiblanco defensive framework and did not get any revenue from the set pieces either, with 18 corners thrown by none of Granada.

The Barça forces the extension

With Barça totally overturned and the locals already living in their area, Aarón was completely consecrated with a paradón before a Chilean of Antoine Griezmann and another stop before the umpteenth attempt by a Messi who never gave up and who dressed as an assistant to rescue his own.

After a shot to the crossbar by Dembele, Griezmann took advantage of a pass from Messi to score 2-1 in the 88th minute with the help of the post and Aaron, despite finishing without an angle, and putting excitement to the final stretch.

The Barça had the tie with a shot of Messi to the stick, and he definitely got it for force extra time in the 92nd minute with a target from Jordi Alba head after a pass from Griezmann in another action started by Messi.

In a crazy end of the game, there was still time for Granada to stay with the victory when Colombian Luis Suárez left a heads-up against Ter Stegen in the last action of regulation time.

In overtime, Barcelona’s dominance continued, with Aarón holding his own to new shots from Messi and Braithwaite, but in the 100th minute he could not prevent Griezmann’s header, after a measured center from Jordi Alba, became the 2-3.

Almost in the next action, Granada was able to mount a quick play and the American Sergiño Dest committed a penalty on Carlos Neva that Fede Vico scored for tie the clash again (3-3).

Messi was also present in the 108th minute at 3-4, as Aaron did not catch a distant shot from the Argentine and De Jong took advantage of the rejection to put the clash in the face again for theirs against a Granada that no longer had the capacity to react.

In fact, Jordi Alba finished the duel with a great shot in the 113th minute after another assistance from Griezmann against a Granada that, with 3-5, finally lowered its arms.

Incidents: Match corresponding to the quarterfinal tie of the Copa del Rey played at the Nuevo Los Cármenes Stadium in Granada behind closed doors.