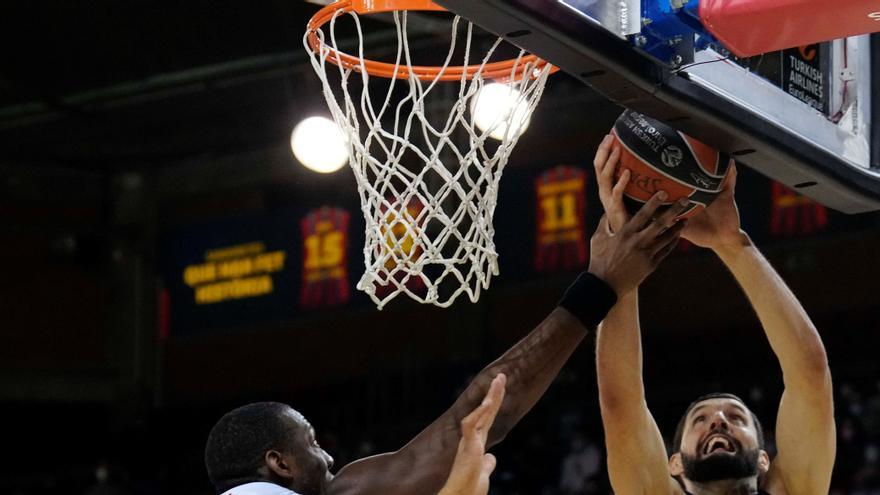 The Barcelona drew strength from weakness to defeat this Thursday the Anadolu Efes (82-77), current European champion, in a titanic duel that awakened the best version of Sarunas Jasikevicius’ team and also that of a dedicated Palau Blaugrana.

The Barça fans had not forgotten the defeat against the Turkish team in the last Euroleague final and generated the thunderous atmosphere of the great European nights to feed a Barça that arrived lacking freshness and after three consecutive defeats.

In an exhausting combat and with minimal advantages, Barça recovered its best choral version at a defensive level, while in attack the performance of the young point guard Rokas Jokubaitis stood out, as he took charge of the team in the second half and scored 16 points.

The Anadolu Efes, commanded by the bases Shane Larkin (17 points) and Vasilije Micic (18 points), could not count on coach Ergin Ataman from the beginning of the third quarter, who lost his temper when he was sent off for protesting and left the track making defiant gestures to the stands.

Hours before the game, the Barcelona squad confirmed the availability of point guard Dante Exum, the last player of the first team who was still sidelined by covid-19, but again had base Nick Calathes, shooting guard Álex Abrines and center Pierre injured. Oriola.

The veterans of the Barça wore the gallons the initial stretch of scoring, of a high defensive intensity on both sides of the pitch, to secure the first advantage on the scoreboard thanks to the offensive inspiration of Mirotic, with nine points (two triples and a 2+1), and Higgins, author of six goals (17-9, minute 6 ).

The departure of Shane Larkin to the parquet, combined with the rest of the Barça starters and the power of the Turkish team in the offensive rebound, allowed Anadolu Efes trim the deficit at the end of the first quarter with a quick 0-6 run (19-17).

The power of center Bryant Dunston near the rim punished Barcelona with five consecutive points, which was down on the scoreboard after triples by Larkin and power forward Adrien Moerman (26-32, minute 16), a former Barça team like than interiors Chris Singleton and Tibor Pleiss.

It was another ex, the Barcelona center Sertac Sanli, who led the reaction of the Catalan team with six straight points and a tireless fight under the board (35-36, min. 18), matched by the coral defensive improvement of the Catalans than in attack they fearlessly sought the rim and took advantage from the free throw line.

A triple by point guard Rokas Jokubaitis and a basket after a rebound by Mirotic, top scorer at halftime with 13 points, put Barça ahead but a triple by Larkin, Anadolu Efes’ offensive leader with 12 points, kept the Turks ahead at the end of the second act (40-41).

The triples by Sanli, Laprovittola and Kuric lit up the Palau Blaugrana, but not as much as the expulsion of the visiting coach Ergin Ataman, who after seeing two techniques in a few seconds due to his protests, refused, in the first instance, to leave the track and, finally, he did so by raising his fists and hitting his chest in a defiant gesture towards the stands (51-43, minute 24).

The incident interrupted the good moment of Barcelona, ​​which despite rushing into attack and conceding several easy baskets managed to finish the third quarter in advantage led by Jokubaitis (61-56).

Anadolu Efes tightened the scoring from the free throw line (70-68, minute 35) and a triple by Larkin raised ghosts on the Barça side (73-72, minute 37), but under the direction of Jokubaitis and a triple by Brandon Davies (78-72, minute 38) unleashed the din in a dedicated Palau Blaugrana.

The Barca entered the last minute ahead on the scoreboard (80-75) and did not waste the loot to tie with a foreshortened basket of Jokubaitis a prestigious victory against the current European champion (82-77).

Incidents: Match of the twenty-first day of the Euroleague played at the Palau Blaugrana in Barcelona before 5,260 spectators.