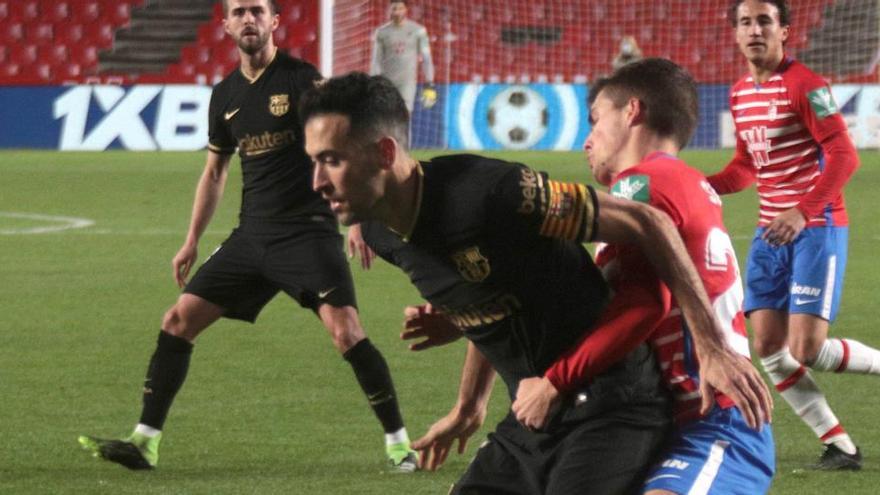 Granada and Barcelona are measured looking for a place in the semifinals of the Copa del Rey, a dream for the rojiblancos in their attempt to match the feat of last season and an obligation for the Catalans after losing the Super Cup and being far from the leadership in LaLiga Santander.

Granada faces the game with significant casualties in the center of the field, but with the illusion of repeating the cup semifinals reached the previous season after beating Valencia (2-1) in the quarterfinals, also at home.

The Andalusians, still alive in the three competitions they play, come from drawing on Sunday against Celta in the domestic championship (0-0) and accumulating two consecutive clean sheets, since the previous Thursday they defeated Navalcarnero with solvency in the Round of 16 of the Cup.

To receive Barcelona, ​​who only a few weeks ago walked in the Nuevo Los Cármenes in LaLiga Santander (0-4), the coach will not be able to count on three fundamental means in his schemes: the French Maxime Gonalons, Luis Milla and the Venezuelan Yangel Herrera, the first two due to injury and the wine red due to coronavirus.

The defenders Joaquín Marín ‘Quini’ and the Colombian Neyder Lozano complete the part of the rojiblanco casualties for the game.

Ángel Montoro and Cameroonian Yan Eteki are the only two healthy rojiblanco midfielders for the shock, since it is not even certain that the Portuguese media outlet Domingos Quina will be available to be in the call, incorporated on the last day of the winter market together with the left-handed side Adrián Marín.

It is anyone’s guess whether Diego Martínez will bet against Barcelona on the group of players who have been performing in the Cup, which are the least common in LaLiga Santander and in the Europa League, or will he seek a place in the semifinals with his most important players .

It is possible that the starting eleven is a mixture of both options, taking into account that the coach has to distribute efforts when he returns to play on Saturday at two in the afternoon, in the Levante field, and also have around the corner the crossing of the round of 32 of the Europa League against the Italian Naples.

After the commotion generated by the leak of Messi’s contract, Barcelona returns to the Copa del Rey with the challenge of reaching the semifinals and, incidentally, also drive away the controversial extra sports.

The Barça team already showed on Sunday that it knows how to overcome the media agitation, defeating Athletic (2-1) on the same day that the newspaper ‘El Mundo’ leaked that Messi has signed the most expensive contract in the history of sport with Barça, worth 555 million euros for four seasons.

Unaware of all this noise, the victory against Athletic helped the Catalans to unseat Real Madrid in the LaLiga, climb to second place in the standings and seal a winning streak of five consecutive victories in the regular competition.

After suffering to eliminate Rayo Vallecano in the previous round of eighth (1-2), Barça returns to the Cup with the intention of exporting the solidity exhibited in LaLiga.

The most probable thing is that the Barcelona coach, Ronald Koeman, will continue betting on the 4-3-3 game system or on its tactical variant at 4-2-3-1. Whatever it is, the coach knows that he has the casualties of defender Gerard Piqué and attackers Philippe Coutinho and Ansu Fati, long-injured.

The main unknown in the lineup is to know the scope of rotations Koeman has done so far in the Cup. However, facing a First Division rival, it is possible that the Dutchman opts for the gala eleven.

Of course, he will do it with doubts on the right side. After a week off, Sergiño Dest has returned to the call once his discomfort in the right thigh has been overcome, although it is not ruled out that Óscar Mingueza continues as a starter. For now, Koeman will be more cautious with Sergi Roberto, who returns after two months of injury.

Jordi Alba will close the defensive line on the left side and, as a pair of centrals, Ronald Araujo and Clement Lenglet, despite the good moment of Samuel Umtiti.