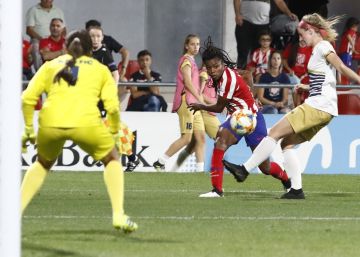 He Barcelona, runner-up of the Champions League, will face the Belarusian Minsk in the round of 16 of the Women's Champions League, in which the Atlético de Madrid will be measured at Manchester City english and Lyon, current champion, will do so against Danish Fortune. Barcelona, ​​one of the series heads in the draw made on Monday by UEFA in Nyon (Switzerland), will play the return home and Atlético de Madrid will start in their stadium and solve the tie in the English team's field.

The almighty French Olympique de Lyon, champion of the title, was paired with the Fortuna Hjorring of Denmark. The French conquered their sixth title, the fourth in a row, on May 18 in Budapest, at the expense of Barcelona (4-1) that for the first time led Spanish women's football to be present in the final.

In this season the Catalans settled without difficulty the previous tie against Italian Juventus, who won in the first leg 0-2 to sign their pass with another win (2-1), in Sant Joan Despí. The rojiblancas were not heads of series in today's draw that they agreed to after being imposed on Spartak Subotica in sixteenths, 4-3 in the overall. They won in Serbia by 2-3 and drew 1-1 at Alcalá de Henares.

Current champions of the First Spanish, the athletics will again run into Manchester City, a team they defeated last year in the round of 16 - with a tie at 1 at home in the first leg and 0-2 in the lap at Manchester , although later the German Wolfsburg stopped its European adventure. In the first leg they fell 4-0 and in the round 0-6.