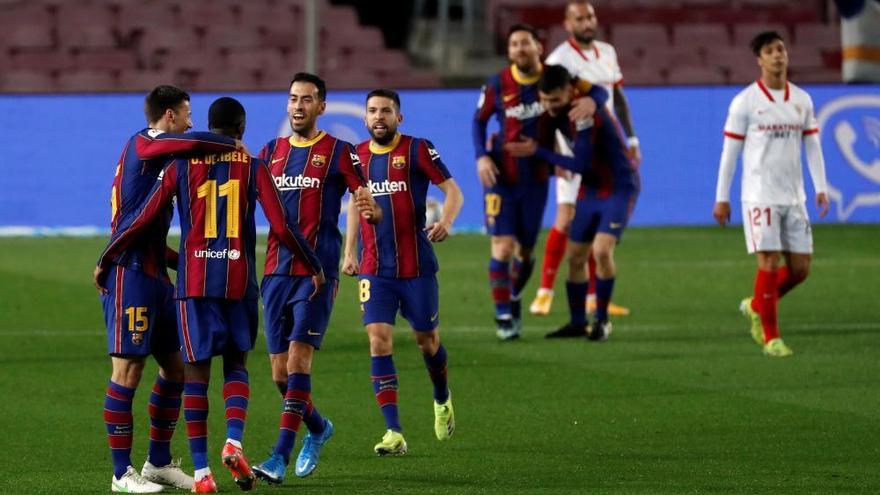 As he did against Granada in the quarterfinals, the Barcelona gave the fans another epic night and qualified for the final of their fetish tournament, the Copa del Rey, after overcome the 2-0 that Sevilla He was renting from the first leg played at the Sánchez Pizjuan.

A goal from Piqué in the last play of the game, after what Ter Stegen saved a penalty to Ocampos, took the match into extra time, where the Catalans culminated the comeback with a goal from Braithwaite at the start of the first half.

Lopetegui changed half of the team with respect to the League match, put En-Nesiry and Luuk de Jong together in the lead and went to look for Barça upstairs, aware that to sentence the tie was to score at the Camp Nou.

But the Catalans easily overcame this first pressure line, and the Sevillian team suffered from the first minute of local harassment.

Koeman repeated the system with three centrals that he successfully recovered last Saturday and also the same eleven that had already scored two against Sevilla on the same stage.

Y the waves of the local team followed each othern from the start. Busquets, Dembélé, Lenglet … And again Dembélé, who nailed it for the squad from the front to Vaclik at 12 minutes. Sevilla conceded their first goal in the entire Cup.

The harassment and demolition of Barcelona did not stop throughout the first half. Intense, well placed behind and with Pedri and Messi greasing the engine room, he kept looking for the second.

Pedri finished off wide and Acuña saved another under sticks a goal from Messi, while in attack Sevilla was barely able to disturb Ter Stegen, who only had to be activated by a shot by Aleix Vidal deflected by Lenglet and a header by En -Nesiry who got bitten.

The game came to rest and Barça went to the locker room feeling that the rival had escaped alive. Lopetegui had to move if he did not want to see how the tie fizzled out.

He did it at nine after the restart. Aleix Vidal was injured when he wanted to stop Pedri’s career and the Sevillian team coach gave entry to Rakitic, Navas and Rekik looking for something more control.

Barcelona continued to dominate, but Sevilla, more tucked behind, no longer suffered as at the beginning and began to have a little more the ball. Koeman decided to bet on Griezmann for the last half hour.

But it was Jordi Alba who, just entered the French striker, crashed an acrobatic shot off the crossbar that made Vaclik’s goal tremble.

The tie could have turned upside down shortly after, when in a counterattack led by En-Nesiry, Mingueza gave Ocampos a penalty. Ocampos himself threw the maximum penalty, but Ter Stegen guessed the intention in 73.

The Barça, that had been seen outside, returned to the load in search of the end, and did it with all the last quarter of an hour. In the game’s epilogue, Messi took a corner. The ball reached Griezmann, after a clearance by the visiting defense, and The Frenchman centered the heart of the area so that Piqué headed in foreshortening to make it 2-0. The Barça center-back went crazy in celebration and the clash went into extra time.

Sevilla entered the added sunk and with one less man for the expulsion of Fernando in the discount, and the Barça already played unleashed. Junior had the first one as soon as he started and Braithwaite finished off 3-0 at five minutes.

The Andalusians claimed Lenglet’s hands within the area after checking with the chest, but the VAR determined that they had been involuntary.

Lopetegui’s team only needed one goal to turn it around, but unhinged, instead of playing, he dedicated himself to protesting each decision of the referee Sánchez Martínez.

Messi was putting Vaclik to the test again, and Piqué noticed something in his right knee, the same one that has been out for three months, to add some more drama to the crash.

With Piqué lame in the last ten minutes, Sevilla tried to react, and the last one was Koundé, who fired a ball rejected by the crazy defense in front, but found Ter Stegen well placed.

Incidents: Second leg of the Copa del Rey semifinals played at the Camp Nou behind closed doors. The three candidates for the presidency of FC Barcelona attended the meeting, invited to the box by the club: Joan Laporta, Víctor Font and Toni Freixa.

Tags: Barcelona, go up, it grows, Seville, will play