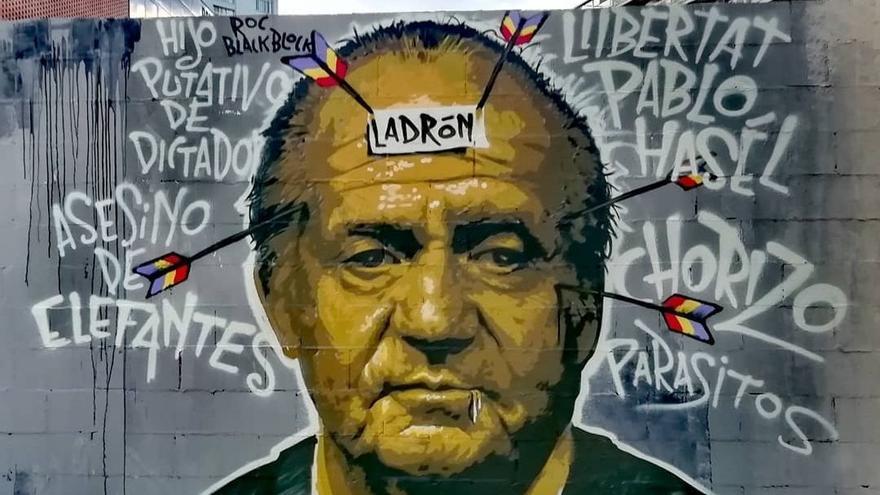 The removal of a graffiti in Barcelona in which the emeritus king appeared, painted as part of a campaign to support rapper Pablo Hasel, sparked a strong controversy on Monday that forced the City Council to apologize. From the consistory they denied that the cleaning workers had erased it by political orders and they promised to review the protocol from which this decision was reached.

The creator of the graffiti is the artist RocBlackblock, who painted it on Sunday as part of an action along with fifteen other graffiti artists against Hasel’s impending imprisonment and in favor of freedom of expression. All the murals were made on the Tres Xemeneies wall, in the Sants-Montjuïc district, a space managed by the Rebobinart entity and precisely designed and reserved for urban art. But only his graffiti was removed, in which King Juan Carlos appeared with several arrows with the Republican flag, and not all the others.

“This mural should not have been erased. Although there has been no political order, it is an error that should not be repeated, and that is why we have asked to review the protocol that has been applied, “said the mayor, Ada Colau, on Twitter. The district councilor, Marc Serra, called the artist to convey his apologies and insisted that a report had been requested to find out how and based on what criteria the cleaning services had acted. “It is an artistic mural protected by freedom of expression,” concluded the mayor.

The artist assured elDiario.es this Tuesday that he has lived the last hours with a mixture of sensations, as he learned new information. “I have gone from surprise to rage, and from anger to bewilderment,” he admitted. “If it has been done deliberately, it is worrying, but if the cleaning workers have done it autonomously, or by order of the Urban Guard without political support, then I also find it alarming but for other reasons,” reflects this urban artist.

After receiving the apologies from the council, RocBlackbloc states: “I think the movement is demonstrated by walking. And for now they are words. The actions they take will validate how sincere and deep their intentions are ”. In passing, the artist wants to take advantage of the visibility that this controversy has given him to insist that “the focus should be freedom of expression and cases like those of Pablo Hasel; my mural is an anecdote ”.

In the last 24 hours, the district councilor has had conversations with both the artist and the Rebobinart association to offer them again to remake the work. “If there are costs derived from it, we will cover them,” Serra remarked on Tuesday, adding that he does not believe that if the artist ends up doing it, it will be on a short-term date. RocBlackblock assured that he is still studying how to do it, although he looked at it with good eyes: “The mural is already covered and these works are not churros. But there are reasons to make another version. It would be a way of showing that not only have they covered it, they have magnified the impact of the work, but that it is still there, that we stand firm ”.

The Tres Ximeneas wall is a space in which murals are constantly painted, one on top of the other. The works do not usually last long. Marc Sánchez, from Murs Lliures, explains that already in summer the cleaning workers covered up a part of a mural that made reference to the death of George Floyd and that read Here the police also kill. “We must get out of this controversy with a method to prevent this from happening again, because otherwise it will happen again,” he says.

The Murs Lliures association stipulates on its website that artistic interventions are framed within freedom of expression but have some limits. Racist, homophobic or human rights motives are not allowed. Neither advertising. A little more detailed is the license document granted by the City Council, which refers to the works that are subject to article 63.1.b of the ordinance on the use of public space: “actions that offend the convictions of others are not allowed. people, or the generally accepted guidelines on coexistence ”.

This is part of what must be resolved in the internal investigation opened by the consistory. They refer to it when asked by who gave the order to remove the work, how it was carried out and if it is that article of the ordinance to which they are subject to do so. For both the artist and Sánchez, it is clear that the mural is part of freedom of expression and should not offend anyone, since for example arrows, they add, are an obvious graphic resource.