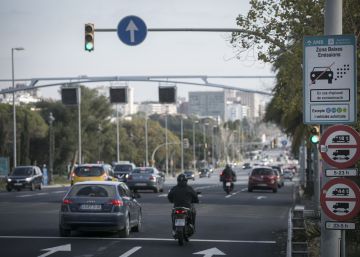 While the Catalan capital, which on Thursday premiered one of the Largest Low Emission Areas (ZBE) in Europe, advances against air pollution with the support of its institutions – City Hall, Barcelona Metropolitan Area (AMB) and Generalitat -, Madrid addresses denialism: the regional president, Isabel Díaz Ayuso, denied on day 1 that pollution causes death, some statements that he has not corrected despite the fact that in these two scientific days and institutions I have been shown that I was wrong. Meanwhile, the mayor of the capital, José Luis Martínez-Almeida, who promised to eliminate Madrid Central and could not do it for the judicial varapalos, has approved a moratorium so that some more polluting vehicles can continue to access the capital, and has also reopened two previously restricted streets and has criticized Barcelona’s plan as “a hoax.” The mayor of Barcelona, ​​Ada Colau, responded by challenging him on Twitter: “Let’s see who reduces pollution the most.”

The entry into force of the ZBE of Barcelona, which prohibits driving through the capital and four municipalities adjacent to the most polluting vehicles – those that do not have a DGT label -, this Thursday resulted in a 7.5% reduction in access traffic compared to January 2 of last year. The day of the premiere, from seven to ten in the morning, 6,000 fewer vehicles entered the city and 4,900 fewer left, according to the Catalan Traffic Service. The Government of Mayor Ada Colau spoke of a 15% reduction in traffic at access points and 11% within the city, but compared the date of this Thursday with December 23, on the eve of Christmas Eve, when the city It is filled with distributors and buyers from other locations.

The Councilor for Climate Emergency, Eloi Badia, asked for “caution” before the data, being on January 2 a working day in full school holidays, although he took the chest of the ZBE. “It is a pioneer in the State – its area comprises 95 square kilometers – and places Barcelona as a brave city and a precursor in environmental and health policies.” Badia also recalled that when they will appreciate the effects of the ZBE it will be from January 8, when the city recovers normal activity, and, above all, on April 1, when the offenders will be fined. This first year, vans, trucks and coaches are allowed to drive without a label.

The opening day of the restriction in Barcelona passed without incident. License plate control, to verify if cars have an environmental label, is done with 36 cameras at strategic points in the city. And there were neither informants nor Urban Guard stopping offenders. The veto to the polluting car affects about 115,000 vehicles (85,000 cars and 30,000 motorcycles), according to the AMB, which groups the capital and the 35 surrounding municipalities. The calculation is based on the fleet of vehicles that circulates in the area.

Every time a measure of these characteristics is launched there are voices that cry out against the changes. It was a year ago with Central Madrid, when opposition and merchants warned of that the city would collapse with restrictions. It did not happen, his entry into force was a civic success. In Barcelona, ​​the ZBE receives criticism from environmentalists and neighbors, who are committed to tightening restrictions; and by employers, who ask to make them more flexible. This Thursday, while the Platform for Air Quality demanded a deterrent toll entrance to the city, the General Association of Autonomous Transporters of Catalonia denounced that the ZBE is “unassumable” for the sector, despite having a year of moratorium, and warned that “thousands of freelancers and SMEs will be condemned to leave the profession.” Meanwhile, the Motor Guild said that in the last three months car sales in the ZBE area have grown by 20%.

The driving administrations remember that these types of measures are taken because pollution causes about 10,000 premature deaths in Spain, according to calculations by the World Health Organization (WHO). The highest levels of pollutants occur in Madrid and Barcelona, ​​which is why the European Commission has threatened Spain with a million dollar fine if no measures are taken in both cities. Madrid did it on November 30, 2018 (the first three months, without penalties) and Barcelona does it now. The fines for improper access to the Catalan capital will be applied from the month of April. Those of Central Madrid – which started on March 16 – now exceed 375,000 (data until September), according to the City Council of the capital.

The mayor of Madrid described this Thursday as “deceiving” the project of the Catalan capital, it is “less restrictive than Central Madrid.” “[La ZBE de Barcelona] It is much less restrictive than Central Madrid. We are in a very wide area of ​​restriction (in relation to the perimeter) that prohibits the entry of cars without a label, but not every day, apart from which they then have 10 working days of leave, ”he said. Despite pulling chest by the star measure of Manuela Carmena, the councilor has not given up on his efforts to decaffeinate her.

Two streets so far included in the restrictions (small but concentrated many fines) reopened to traffic on January 1, which cuts the perimeter, while a year of moratorium will be applied so that the most polluting vehicles of various groups can Continue to access the center. More serious are the messages that the members of the Consistory periodically launch against Central Madrid – “it doesn’t work”, they repeat -, that have driven traffic and fines to increase in the center in recent months. In September, Almeida announced that it would change the name of the low emission zone for the great Madrid 360, a change that would involve letting vehicles with the C-label freely enter the area, that is, relaxing the restrictions. However, it has not yet been able to approve that initiative, which requires modifying the Ordinance by agreeing with its government partners, Citizens and the ultra-right-wing Vox.

Meanwhile, Díaz Ayuso continued this Thursday without rectifying his statements on day 1 that “nobody has died” due to pollution despite the numerous evidence that she is wrong. Even his transport advisor, Ángel Garrido, acknowledged that “it is evident that there is a direct correlation between mortality and pollution”, something that “of course the president also knows.” He struck down the phrase on an “unfortunate” day.

In Barcelona, ​​the premiere showed the alternatives chosen by drivers affected by the pollution ban. Families that had several cars and will drop one. Others that will change it for an old tourism but not so much or those that have opted for a new one. Bikers who have bought a motorcycle just out of the factory. And some who still don’t know how they will circumvent the ban when fines arrive.

Citizens applaud acting against pollution, but criticism comes about how the ZBE has materialized: the one who harms most is those who cannot change the vehicle. Among the defenders of the ZBE are some of the almost 6,000 citizens who have taken advantage of the offer to scrap their old car in exchange for an unlimited transport card and for six areas. It is called T-Green and has a duration of three years, as long as the owner does not buy another car.

With the new restrictions in Madrid, the cars of non-residents in Central Madrid without a DGT label – the oldest ones – cannot pass or park in this area, or with the invitation of a resident (as until now).

In addition, these vehicles can no longer park anywhere in the Regulated Parking Service, an area that includes the entire interior of the M-30 and runs from Monday to Friday from 9 am to 9 pm and on Saturdays until 3 pm.

In Barcelona, ​​the ZBE affects the Catalan capital, L’Hospitalet de Llobregat, Sant Adrià del Besòs and areas of Esplugues and Cornellà de Llobregat. The criterion is not parking but the circulation of cars without a label on weekdays from 7.00 to 20.00. An old car can be parked and circulate only at night or on the weekend.

The last days of Franco’s nobility