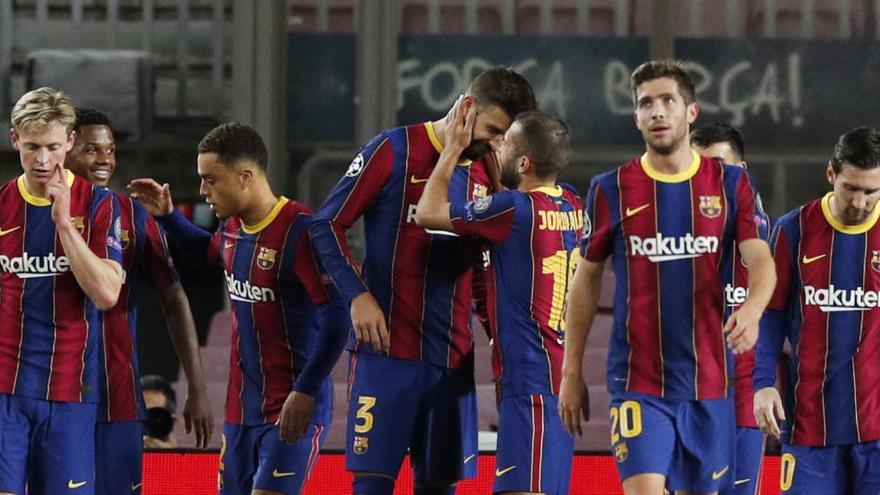 Barcelona and Betis face this Saturday at the Camp Nou in a duel in which the Barça fans have no excuses after adding only two points from the last twelve in the league and to which those of the Chilean Manuel Pellegrini arrive the ambition to continue his game and its best version.

Those of the Dutch Ronald Koeman, without margin to chain what would be the fifth consecutive setback in the league competition, they receive a Betic team that, after two consecutive defeats against the Real society and the Atlético de Madrid, achieved against Elche a reaffirmation triumph in Pellegrini’s football idea.

The Catalans do not win in The league Since October 1, when they thrashed Celta at home (0-3), since then they have accumulated a four-game streak without knowing defeat, with two draws (1-1 against Sevilla and another 1-1 against Alavés) at the beginning and at the end of this cycle, and two losses in between against two Madrid teams: Getafe (1-0) and Real Madrid (1-3).

Even though his game has been, at times, much better than those results and during that period they have also added three victories in three games in the Champions League, Barça need a convincing victory in the domestic tournament like water in May to stay no further from the top of the table.

And it is that the azulgrana team is right now twelfth in the standings, 9 points behind the leader, Real Sociedad, and 8 points from the eternal rival, Real Madrid, although with two and one game less, respectively.

Without the injured Samuel Umtiti, Ronald Araujo and Philippe Coutinho, the good news for Koeman is the recovery of goalkeeper Marc-André ter Stegen, who reappeared with a great performance last Wednesday in Champions, after three months off due to a knee operation and that tomorrow will debut this season in LaLiga.

In full debate about the moment of form and the motivation of Leo Messi, the Barcelona coach will once again bet on his eleven type, in which I will surely see few variations again.

The safest is the return to the axis of the rear of Clement Lenglet as a partner of Gerard Piqué, which would return Frenkie de Jong to the double pivot, next to Sergio Busquets, and Miralem Pjanic to the bench.

Ahead, the only novelty could be the ownership of Ousmane Dembélé to the detriment of Antoine Griezmann, which would force Koeman to redefine the attack, with the French entering on the right wing, Pedro González ‘Pedri’ as left winger, Leo Messi as playmaker and Ansu Fati as false 9.

Betis de Pellegrini, meanwhile, arrives at the Camp Nou with the intention of continuing its best version with an eleven that, with the confirmed last minute withdrawal of French Nabil Fekir Due to some annoyances, it will present a minimal variation with respect to the one that the Santiago coach put in contention in his solvent victory against Elche at Villamarín (3-1).

After two consecutive defeats against Real Sociedad and Atlético de Madrid, the victory against the people of Elche was for Betis, in addition to three balsamic points, an endorsement of an idea of ​​the game based on containment and defensive concentration as support for the Verdiblanca quality of midfield upwards and their vocation to control the games by sending with the ball.

The key to the vault of this system is the presence in the defensive midfielder of Argentine Guido Rodríguez ahead of the defense as support of the Betic containment framework and the balance between lines that Pellegrini pursues with the presence of Caseros’ metronome.

Next to him, eThe Chilean could give continuity to Sergio Canales as against Elche or overtaking the Cantabrian to give that place with Guido to the Portuguese William Carvalho, which would make up the line of three defining midfielders of Pellegrini with the exculé Cristian Tello, captain Joaquín Sánchez and Sergio Canales.

Canales is one of Pellegrini’s franchise players for his quality and his formability to play close to the midfielder or in more advanced positions, both options in which the Cantabrian has become the best passer in LaLiga so far with four goal assists, including two in the goals scored against Elche by his teammate Tello.

Tello arrives at what was his home until 2017, after two assignments to Porto and Fiorentina, as Betis’s top scorer with four goals and in the best of his moments as Betis, which Pellegrini will surely take advantage of to give depth to your game, width to the field, versatility to your attack options and efficiency before the culé goal.

The Betic attack axis will continue to be occupied by Paraguayan Tonny Sanabria, For whom Santiago seems to have chosen ahead of Borja Iglesias and Loren Morón and who also has a past in La Masía as other components of the green-and-white team such as left-handed side Álex Moreno, right-handers Juan Miranda and Martín Montoya and Chilean goalkeeper Claudio Bravo .

Many looks will be tomorrow also in Brazilian right-back Emerson Royal, owned jointly between Betis and Barcelona, For which the Catalans have a purchase option and that will be part of a defense with Álex Moreno on the other side, with the former Barcelona player Marc Bartra and the Algerian Aïssa Mandi in the axis of the rear.

Pellegrini has managed, with the ups and downs of a project that is starting up, to give continuity to a football idea built from the defensive concentration and also to an eleven that, in these turbulent times, it begins to almost recite from memory , which is not little in what it supposes of faith in a scheme and some interpreters who develop it.

The key: That Messi, who has only scored one goal (and a penalty) in six games in LaLiga, recover his best version.

The phrase: Manuel Pellegrini, Betis coach: “It is not the same to face Elche at home than to visit Barcelona. There are tactical questions to consider and we will see which eleven is, but more than the name we want to define the personality of the team.”