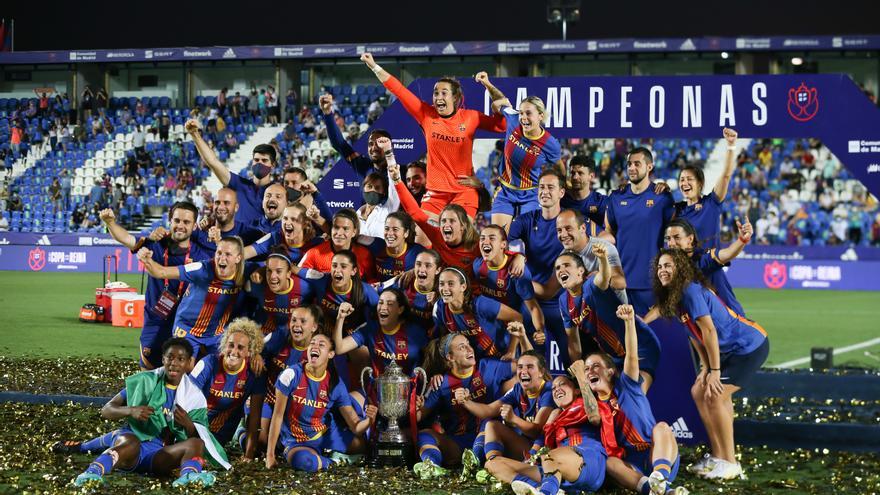 Barcelona signed a historic triplet this season with the achievement of the Copa de la Reina Iberdrola by defeating a proud Levante 4-2 in the final in Butarque, which touched the miracle of coming back from an adverse 3-0 and was about to scare the best team without discussion of the season, but his dream lasted just seven minutes, which Alexia Putellas took to sentence.

It seemed like another placid match for the Barça team. One more of the course in which it has been handled with an iron fist. Three Lieke Martens centers, culminated by respective headers, seemed to leave the match sentenced. But Levante showed that it is a team that never gives up, that always fights. He knew how to take advantage of the relaxation of the champions and scared them with the goals of Alba Redondo and the Argentine Estefanía Banini.

Instead, Alexia putellas He took out the captain’s stripes of Barcelona. Seven minutes later he stole a ball that Levante was trying to get out and with a crossed shot he stopped the reaction of the Valencian team in its tracks and sentenced the match.

After winning the First Division and the Champions League, Lluis Cortés’s ensemble found a niche in the history books by equating itself with Lyon, Arsenal, Wolfsburg and Frankfurt as three-time champions. This triumph also represents his eighth cup title and opens a gap of two over Espanyol and Levante itself.

The Barça coach and the players had wanted to remove pressure and move away on the eve of the condition of clear favorites. Reality, as happened in the regularity tournament and in the top European competition, confirmed again during the first half its tremendous superiority against a rival who has been in second place for a good part of the campaign in the Primera Iberdrola and now is third and with the ticket of the next ‘Champions’ almost assured.

Jenni Hermoso, who missed the semifinal against Madrid CFF, started the last big game of the successful season. More wood for a Levante that raised a rear with five defenders and had no choice but to stand behind in a low block with all its troops. María Pry’s team had no choice but to bail water from the beginning.

Barcelona came out intense and with a high speed of movement. In a sigh he sentenced the final. Two centers from the Netherlands’ Lieke Martens, one from a corner kick and the other from the left wing, were finished off by Patri Guijarro (m.5) and Alexia putellas (m.20) to place a 2-0 that was a mountain for Levante.

The Valencian team, who took eleven minutes to cross the center of the field with the ball controlled with the maximum artillery of the league, Esther González, unassisted at the top, wanted to cheer up. He advanced lines a few meters and began to be able to combine and pose some opposition, but he failed to create real danger against Cata Coll, Barcelona’s starting goalkeeper in this Cup.

The set piece relaunched the Catalan team and cleared any dream of a comeback from the Levantinists with the third goal, achieved by Marta Torrejón after half an hour when he headed a free-kick launched again by Martens.

The ghosts of the 7-1 league fitted in the Johan Cruyff appeared on the horizon of the Valencian team. But María Pry’s squad used her heart and character to not give up early. The French Sandie Toletti, twice in individual header shots, and Alba Redondo touched the goal, but their balls came out brushing the sticks.

Not even so did he bend his knee. Aitana Bonmatí and Jenni Hermoso forgave the room. Patri Guijarro stayed in the stands at half-time, and between the accumulated fatigue of the season and a certain relaxation of Cortés’s pupils, Levante grew so much that two cons culminated by Alba Redondo (m.57) and Banini (m. 67) seemed to question Barcelona’s victory.

Fortunately, a mistake, accompanied by the liveliness and quality of Alexia Putellas, ended the Levantine reaction, which fell with a very high head and great honor before a team that, if not already, is on the way to legend.

Incidents: Final of the Queen’s Cup played at the Butarque stadium (Leganés) in front of 3,000 spectators. A minute’s silence was observed in memory of the 19-year-old referee Fernando Alcaraz Bernal, who died this Sunday. Ana Toledano, a former international handball player who suffers from multiple sclerosis, was in charge of delivering the cup.