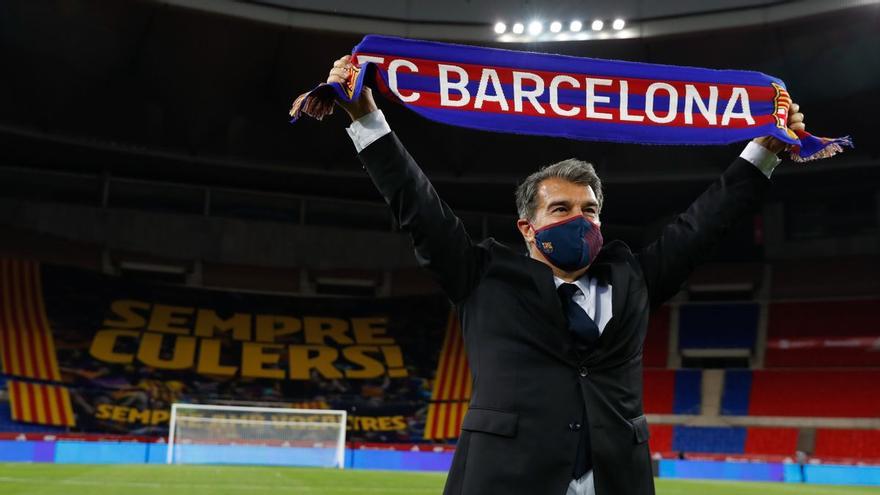 This group has been developing the Super League project. The reason why it was not presented to the general public was that they were waiting for the definitive response from the Barça. The yes of Barça. The signature of Joan Laporta that it did not arrive, physically and really, until Saturday, although the leader made the final registration subject to the approval of the Assembly of Compromisarios, which has no date of convocation; It will be carried out when the four audits commissioned by the new board of directors.

All together, including Barça, the only thing left to do was take the step. It happened, it was wanted, a few hours before the UEFA Executive Committee presented the reform of the Champions League from 2024. Too late a date, “when we will already be dead,” he said. Florentino Pérez, double president of Real Madrid and the Super League. Another clandestine intervention, at 12 p.m. on Monday, without the formality or grandeur that corresponds to the high and luxurious pretensions of the competition.

🧐 “THE SUPERLEAGUE WILL HELP BARÇA”

🗣️ “It didn’t cost me to CONVINCE LAPORTA”

It was known since 2017 that the clubs were demanding a change in the Champions League, and that the most powerful were conspiring to present an alternative. It was also known, since last October 28, that Barça was on the hook. Unveiled it Josep Maria Bartomeu the day he resigned not to face the motion of censure. Bartomeu announced that he had signed the requirements to participate in the Super League, a competition that “will change, in an extraordinary way, the perspectives of the income of the next years”.

That is one of the reasons for the acceptance of Barça. With a suffocating debt of 1,173 million bequeathed by Bartomeu, and the brutal reduction in income due to the pandemic, immediate injection of 350 million by the mere ascription in the founding act, it was an irrefutable attraction. On the other hand, in Barcelona the resignation of its managers from the fifties to join the project of the European Cup, which was embraced by Real Madrid, and who reported five consecutive titles on which he built his legend. The feeling that it can’t happen to us again it flew over the Camp Nou meeting room.

But Barça was predisposed and was fully aware of the Super League project since the first day. Florentino Pérez saw little less than unfeasible to activate it without the participation of Barça. The union of the two eternal rivals projected a sense of unpayable strength and conviction for others. The delay has been due to the Barça electoral process.

No voice or president

From October to March, Barça did not have a president. Carles Tusquets, the Chairman of the Management Commission had no decision-making capacity on this. Much less the candidates. Joan Laporta he expressed his reluctance in January.

“I am open to being explained,” he said in the campaign, amid the caution required by an initiative that was born behind UEFA’s back, knowing that it would provoke a contrary reaction from the establishment – “since 2003, with the G-14 already it was contemplated and ended up not coming out-, and the will to “maintain the essences of football so that we do not burden ourselves with football and the business.” Laporta anticipated that if the Super League did not bear fruit, it would be because UEFA would agree to negotiate.

Knowing the $ 350 million income helped open his ears. The champion of the Champions of the past campaign, the Bayern Munich, could only get a maximum prize of 82.2 million for the title, before the percentage of pool of TV.

The presidents and the two general directors of Barça, the outgoing Òscar Grau and the incoming Ferran Reverter, have explained it to Laporta. The general manager was the lowest-level representative of any club at the G-12 meetings where they drew up the Super League and negotiated its future operation. But the Barça president had other priorities since he entered Sant Joan Despí on March 8, the day after winning the elections.

The highest of those priorities was to get closer to the sports city to convey his encouragement to all professional teams, starting with football and Barça B. And from then on, together with the approaches to Lionel Messi To obtain the renewal of the contract, it was a question of knowing the real situation of the club. Its board of directors has activated four thematic audits. The Super League dossier, more elaborate for years, has led him to say yes. Above all, when he read the figures that Barça will enter before even stepping on the pitch.