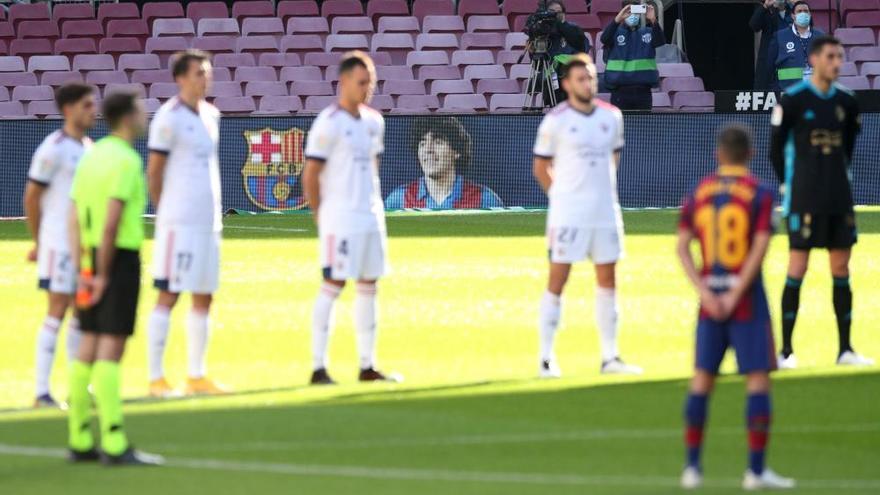 The Barcelona thrashed Osasuna (4-0) the day the Camp Nou, empty due to the pandemic one more game, surrendered tribute to Diego Armando Maradona, represented in the box by the elastic with the ’10’ on the back that he wore in his Barça stage.

In the tribute to Diego, the day that he also the 121th anniversary of the club was celebrated, Leo Messi, his heir, managed to dedicate the goal that closed the Barça account: a left foot, after a house brand driving that made Sergio Herrera’s stretched out useless.

A bit that the ‘Flea’ dedicated to the ‘Pelusa’, taking off the Barça elastic to discover the red and black of Newell’s Old Boys with the ’10’ that Maradona wore for a season, as he extended both arms and looked up at the sky.

The Barcelona captain was about to pay tribute to Maradona in 1-0, when Herrera rejected a double shot from Coutinho and Braithwaite that Messi almost finished with a hand in goal, emulating the famous ‘hand of God’ from Mexico 86.

However, the Rosario crack did not reach the ball and the goal ended up being Braithwaite, on a roll after scoring three goals in the last two games.

In Messi’s tribute to Diego Armando Maradona, sneaked in this Sunday Antoine Griezmann, who played one of his best games since signing for Barça.

At twelve minutes, he beat Herrera to give a sung goal to Coutinho, but the Brazilian’s shot was taken by Unai García on goal line.

Griezmann, in a state of grace, returned to the charge shortly after and crossed a ball with his left foot that forced the visiting goal to intervene. And, on the next play, Coutinho returned the assistance to the French, but this one did not find, by little, the goal of the red team.

The game started entertaining. Arrasate lost Jony through injury at 20 minutes and he was forced to admit Juan Cruz, and Budimir, who has always been good at the Camp Nou, caught a ball in the area with a volley that went over the crossbar of Ter Stegen’s goal.

Barça went ahead just before half an hour with a goal from Braihtwaite and was able to score some more. Osasuna, despite playing with five defenders, gave too many facilities behind, but also he attacked Ter Stegen’s goal with some confidence.

In one of those attempts, Mateu Lahoz annulled a goal by Budimir for offside previous to Oier and, in the other area, Griezmman channeled all his frustration of the last weeks with a stratospheric volley after a rebound from the Navarrese team’s rear to make it 2-0 shortly before the break.

Koeman sat Pedri down and gave entry to Sergio Busquets to rest to recover the classic double pivot, but Osasuna started the second act better.

Rubén García and Roncaglia they put Ter Stegen to the test from outside the area and Budimir finished off slightly off El Hierro from a corner.

But Griezmann appeared again to steal a ball in the three-quarter zone and assist Coutinho who, this time, did he finished at pleasure to make the third.

There was half an hour left for the end of the crash and both coaches started to move the bench thinking about the next commitments. The game was already over.

But the Barcelona coach was forced to also replace Lenglet shortly after. The Frenchman sprained his ankle in a fortuitous action with Rubén García and became the injured center fourth of the squad.

Roberto Torres crashed a ball off the crossbar and the referee annulled a Dembélé goal for offside by Trincao, before Messi closed the afternoon with a great goal to honor Diego.

Incidents: Match of the ninth day of The league Santander played at the Camp Nou behind closed doors. Before the match, a minute’s silence was observed due to the death of Diego Armando Maradona, a Barça player between 1982 and 1984.