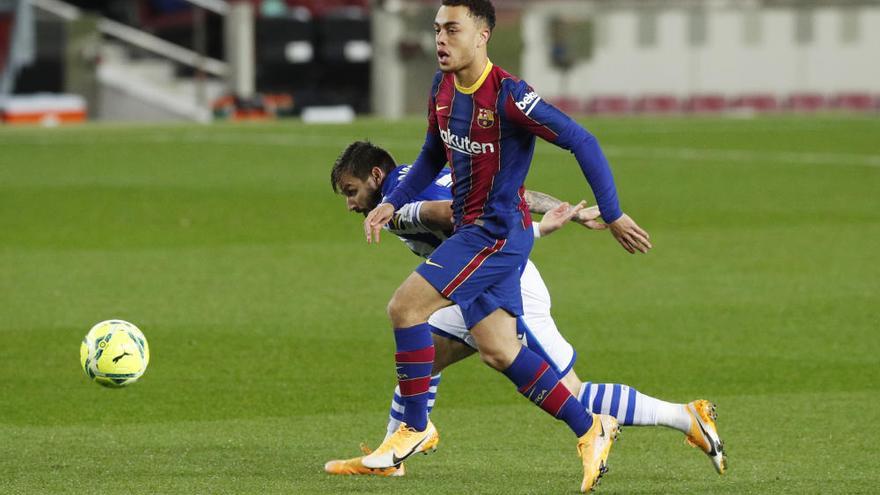 He Barcelona added his second consecutive home win, again with suffering, in a game in which he distilled good feelings in the first half, in which he came back, but suffered in the second before the push of the Real society (2-1).

Those of Ronald Koeman offered an hour of good football, but in the final half hour, Imanol Alguacil's men had the ball and closed in on Ter Stegen's goal, who was decisive in a great intervention in the 84th minute from Isak's shot.

Jordi Alba, author of 1-1 and assistant in 2-1, was decisive in the victory. It took a while, but Koeman seems to discovered the formula for his team to play at a good level, although yes, not throughout the game and his team ended up asking for the time.

In the first hour of the game his team worked like clockwork, dominated the situation thanks to the control of the midfield, where he finally regained the traditional role of midfielders in the Barça game, a facet in which Frenkie de Jong excelled, but also Pedri, who formed a great partnership with Messi.

Koeman blamed each of his players in the one-on-one game and Barça signed one of the best 45 minutes of the season. Also behind, with the presence of two young players like Mingueza and Araujo, the team felt safe, although for this had to row upstream, because Real was the one that went ahead on the scoreboard.

From the beginning, the Catalans felt comfortable coming out on the left, with Alba and Braithwaite. The first approach was a good shot of Griezmann (min. 8). La Real did not feel comfortable, did not come from behind and I hardly led to the opposite field with options.

In attack, the pair formed by Pedri and Messi generated a lot of football. In addition, De Jong felt liberated for once and showed glimpses of that great player who was at Ajax. Busquets swept everything in the spinal cord and allowed arrivals from the second line from any of the media, also from Griezmann and Braithwaite.

Messi played a fundamental role in the generation of the game, but it was not correct. He finished high in the 23rd, Alba missed the 25th and in the first great opportunity for Real, Imanol Alguacil's men scored.

It was in a play with many doubts in defense of Barça, in which the San Sebastian did not forgive. Pedri missed and allowed the action of Portu, who put the ball on William inches from the goal line (0-1, min. 28).

In other circumstances that goal would have sunk the Catalans, but not today and also, it took very little to balance the situation.

Alba caught a ball up front and with her right placed the ball in Remiro's goal square (min. 31). Real woke up after the draw, but Barça felt strong. Griezmann had it 2-1 after a great recovery and a shot to the crossbar, Braithwaite also did not hit the mark in 38, but in 43, an assist from Alba allowed de Jong, coming from behind, to score 2-1, in a play initially canceled for offside, but validated by the VAR (min.43).

In the second half, the game was another. La Real came out with a different mentality, had more the ball and controlled the game, but the best chances were for the Catalans, especially in the first minutes. Messi did not hit the counter in superiority and Griezmann was able to decide the game on two very clear occasions, in the first he only had to push the ball, but he was not able, and in the second he found a great Remiro who stopped the close auction.

Alguacil put more wood with the entrance of Isak and Koeman responded by putting Aleñá and Trincao into play for Busquets and Griezmann; and the party was increasingly at the side of the San Sebastian.

The threat with two forwards (Isak and William José) stressed the local defensive backbone and the ball was no longer from Barça and doubts reappeared. Pjanic entered for Pedri, who had saved a very clear goal chance by Isak (min. 73) and the Swede had even clearer it in the 84th minute, in an action in which Ter Stegen saved his team. In the end, Barça took the game and traced the game back, something they had not achieved in a long time.

Incidents: Meeting of The league advance of the nineteenth day, played at the Camp Nou. No spectators.