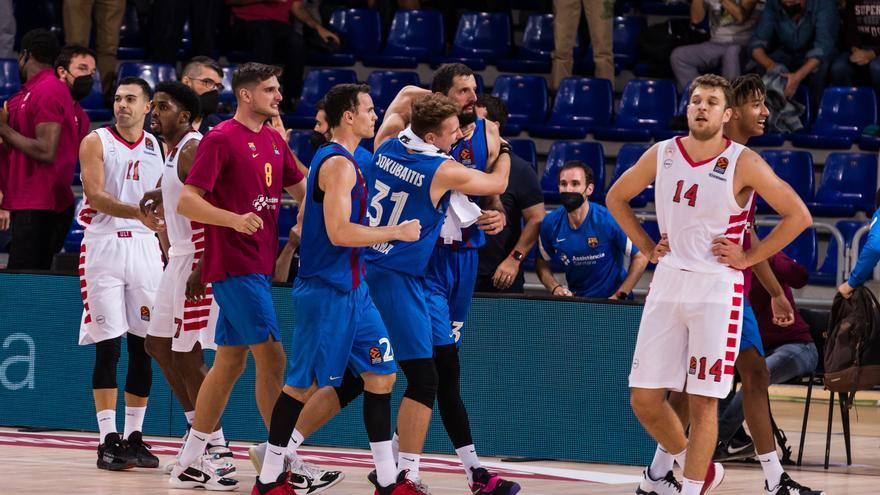 The Barça needed this Wednesday a extra time to tear down the wall raised by Olympiacos (79-78), who at the Palau Blaugrana showed that his good start in the Euroleague basketball is not by chance.

The Barça team, led by Nikola Mirotic (22 points) and Nick calathes (9 points and 13 rebounds), was used thoroughly until the last second to add the full three victories against an opponent in which Kostas Sloukas (14 points), who had the winning shot, stood out in key moments.

Jasikevicius warned in the previous one that it would be a game with few points. The Lithuanian coach was right and from the first half (27-32) his forecasts were fulfilled.

The defenses were in command and, in that scenario, the Greek team handcuffed local talent, although the most surprising thing was the zero triples of twelve attempts by the Barça team after the first 20 minutes.

In the first quarter, Barça only scored 10 points, many of them on the counterattack. Calathes, closely guarded, did not unbalance in static attack, while neither Mirotic, in the zone, nor Higgins, from the perimeter, pierced El Hierro Greek defense.

If Olympiacos took the first quarter (10-17) it was not because of their offensive fluidity, but because of the two triples that Dorsey and Sloukas scored.

The slow pace of the first quarter was maintained in the second. Barça took the set (17-15), but still did not score from the 6.75 meter line.

The Greek team, with Jean-Charles appearing in the area, came to enjoy an advantage of eight points (12-20, min.11) and did not go to the break with a superior advantage (27-32) because props like Dorsey and Vezenkov were well watched by the Barcelona defense.

Barça breathed in the resumption, which began with a declaration of principles with two consecutive triples from Kuric and Mirotic.

The outside success drove those of Jasikevicius. Calathes directed the ship at will, the defensive aids worked and Olympiacos imitated Barça from the first half from the perimeter.

Bartzokas called for a time-out, but his team was unable to stop Mirotic, who scored eleven points in the third quarter, and Barça faced the last ten minutes (55-47) with a comfortable lead.

The game was by no means closed, despite the 9 rental points that Barça had (58-49, min.33). Olympiacos, led by Sloukas in the direction, commanded in defense and controlled the rebound to face the last five minutes with options (58-56).

Four points - a triple by Pierre Oriola and a free kick by Calathes - had scored for Barça after the first seven minutes of the last act.

With everything to decide a minute and 12 seconds, Olympiacos took the lead (65-67) with a Vezenkov transition. Kuric equalized 33 seconds from the free throw line, but neither Sloukas nor Higgins on the last play avoided extra time (67-67).

But the Greek team did not say the last word and, from the personnel line, took the lead (77-78) with 22 seconds to go.

Barça attacked the next possession badly, but Oriola fought the rebound and forced a foul that would be decisive. The Catalan did not miss from the free throw line and, with 7 seconds to go, Barça defended with everything to avoid Sloukas' basket.

Incidents: match of the third day played at the Palau Blaugrana before 3,086 spectators.