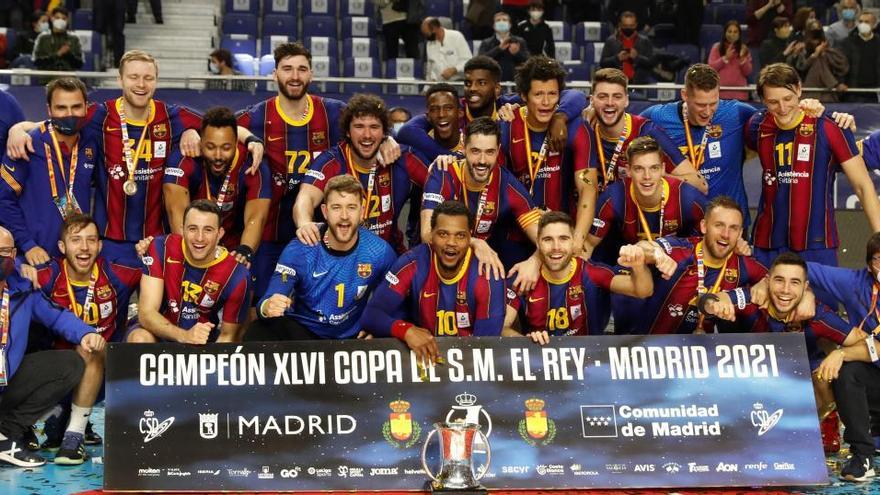 The Barça he fulfilled the script and stood up with his twenty-fifth cup champion title, the eighth in a row, after winning this Sunday by 27-35 to an ABANCA Ademar de León in a final that supposed the farewell of Raúl Entrerríos cupbearer tournament.

A final, in which, beyond the indisputable role of the Barça captain, who was designated the best player of the match, the Leonese team was never able to stand up to the Barça giant, weighed down by his numerous losses of the ball.

A problem that should not detract from the success of the Xavi Pascual, that despite their erratic start, they once again demonstrated the sidereal distance that separates them today from the rest of the Spanish teams.

The variety of arguments used by the Catalans makes the possibility of defeating the Catalans a chimera for the rest of their rivals.

If, as happened this Sunday, players like the French Dika Mem do not have the day, there is the figure of his compatriot, the pivot Ludovic Fabregas to channel the offensive game, or the goalkeepers Kevin Moller and Gonzalo Pérez de Vargas to solve any problem .

As always is Captain Raúl Entrerríos, who In his farewell to the cup tournament, he once again left hints of the enormous talent that he treasures.

And that Barcelona once again showed the same efficiency problems at the start of the final that already led them to suffer more than expected in the quarterfinals against the World Bank. Logroño La Rioja and in the semifinals against Fraikin Granollers.

Either due to accumulated fatigue, as the Barcelona coach pointed out after the semifinals, or for any other reason, the truth is that the Barcelona players have been strangely failures in the launch throughout the tournament.

It is not normal to see gunboats of the stature of Dika Mem fail, as happened this Sunday, such clear shots. And the fact is that the Frenchman not only missed, but sent his first two throws several meters over the crossbar.

Erratic pitches that made the figure of the Algerian goalkeeper of Ademar grow and grow, Khalifa Ghedbane, who with his interventions seemed willing that the final did not die as soon as it started.

But not even the good work of Ghedbane, who closed the first period with seven saves, some of them of great merit, could compensate for the continuous losses of the ball by the Leonese team in attack.

Thus, in a seen and unseen, it went from 4-5, which was barely over ten minutes of play, to 7-11, which began to make the difference between the two teams clear.

If Mem didn’t have his day who did not fail was captain Raúl Entrerríos, which in what was his farewell to the cup tournament, put the pillars of the Barça break with two almost consecutive home-brand goals.

An escape to which pivot Ludovic Fabregas contributed notably, who did not miss every ball that reached the six-meter line to hammer the goal of a Ghedbane, who minute by minute saw his percentages decrease.

Circumstance that allowed Barcelona, ​​despite the efforts of the Croatian side Milan Gostovic, the only one capable of scoring with a certain frequency in Ademar, reach a maximum income of seven goals (9-16) at 22 minutes, which Xavi Pascual’s men knew keep until the end of the first half (13-20).

A difference that despite leaving Once the final was sentenced, it did not prevent Xavi Pascual’s men from continuing with maximum intensity, as if they wanted to get rid of the “gray” image that for now showed in the quarterfinals and semifinals.

Extra march that allowed the Catalans to further extend their advantage until reaching a maximum income of ten goals (21-31) with ten minutes remaining.

A time that Ademar, who with his presence in the final had already ensured his participation next year in European competitions, took the opportunity to make up the score minimally, as a reflection of the 37-25 final, by the hand of Rubén Marchán who once again made clear the reason for his status as the natural replacement of Julen Aginagalde in the pivot of the Spanish team.

Referees: Raluy and Tasty. They excluded Casqueiro and Marchán for two minutes for ABANCA Ademar de León; and Frade and Janc for Barça.

Incidents: Handball King’s Cup final held at the WiZink Center in Madrid in front of 600 spectators