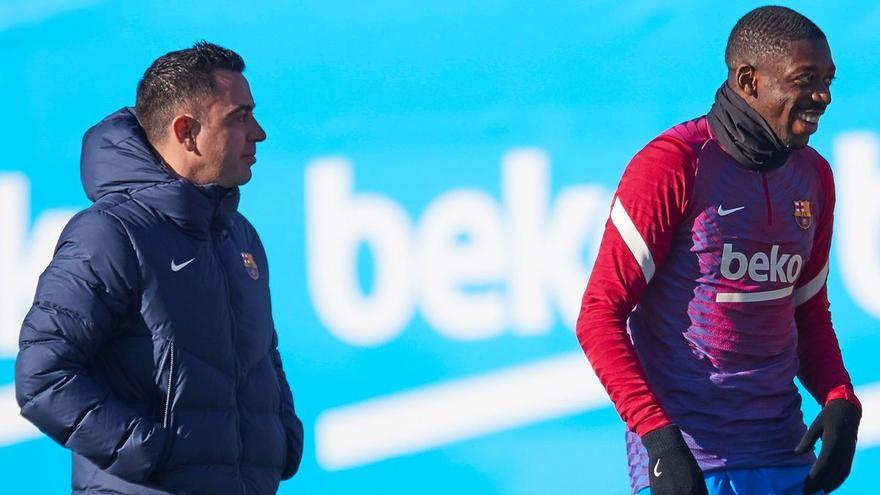 Three is not enough. The winter market is over Xavi want more, aware that the Barca is unbalanced, required, for example, a striker whose relationship with the goal is profitable and immediate and a left-back give him minutes of rest Jordi Alba, in addition to injecting competition.

It has three winter reinforcements (Alves, Fernando Torres Y Adama Traoré, which has already become official), but the coach would love to have that scorer to alleviate the offensive drought that shakes his Barcelona: just 19 goals scored in the 14 official games (1, 3 per game).

The countdown is running out of its final hours and Barça, just like on January 1, when this market opened, keep an eye on Ousmane Dembele, the unbalancing and distorting factor. Unbalanced because in the initial plan, woven by Mateu Alemany, the director of football, and agreed with the coach, the continuity of the Frenchman was a key factor.

But Ousmane has not stopped haggling, over and over again, at the negotiation table until the club, fed up and unhinged by the double language (the player told Xavi that he wanted to continue and his agents, on the other hand, did not stop increasing their requests to Alemany until making them unaffordable) was planted.

left it at home before Athletic Y Alaves, thus believing that the striker would give in to the club's intransigence. So far, it hasn't. And Monday the 31st, with the deadline at 11:59 p.m., is just around the corner.

Juventus has had the financial muscle to pay 81.6 million euros for Vlahovic, one of the forwards that Barça managed

Dembélé has been unbalancing and distorting because he has forced Barça to first find formulas that are as imaginative as they are strange (Umtiti's renewal until 2026 fits into that path) to make salary gap that would allow the registration of Ferran Torres. But if the Frenchman doesn't leave in the next few hours, Xavi will be left without the striker he was asking forI wanted and, above all, I needed.

The Juventus, for example, has had financial muscle to assume the hiring of Dusan Vlahovic, the Serbian scorer (22 years old), for whom he has paid 81.6 million to Fiorentina in an expensive operation in which including the salary (7 million net annual) together with the commissions of his agents ( eight million) rises to 154 million.

Barça allocated the money it had to Ferran Torres (55 million plus 11 in variables paid to City), in addition to losing Vlahovic on the way, a nine who was on the list if the club cannot fight this summer for Haaland. Y bruise, which Xavi wanted to see so much at the Camp Nou, is still in Turin because the Athletic, who has him on loan to Juve, is not as generous as the Catalans were with Suarez first and Griezmann after. Aubameyang, Arsenal's Gabonese striker (32 years old), faced with his coach Mikel Arteta, who even withdrew his captaincy, is the last option the club manages to please Xavi.

But nothing can be done until Dembélé says what he wants to do about his future. If it does so before midnight from Monday to Tuesday, Barça, as happened in the summer market where At the limit of the set time, he transferred Griezmann to Atlético and also started the Seville Luuk de Jong's loan, could repeat identical formula in the winter. Or so the coach awaits, almost desperately, because he still does not have the left-back he was asking for, despite the fact that Tagliafico, the Argentine defender of Ajax, is forcing himself to leave Amsterdam.

The same thing that Aubameyang would like (14 games for Arsenal, four goals this season), who needs to leave London as soon as possible because he hasn't played there since December and has also missed the Africa Cup with Gabon, first because he had coronavirus and later because he had some heart problems. But everyone (Xavi, Alemany, Laporta, Tagliafico, Aubameyang...) depend on him. Depend on Ousmane.