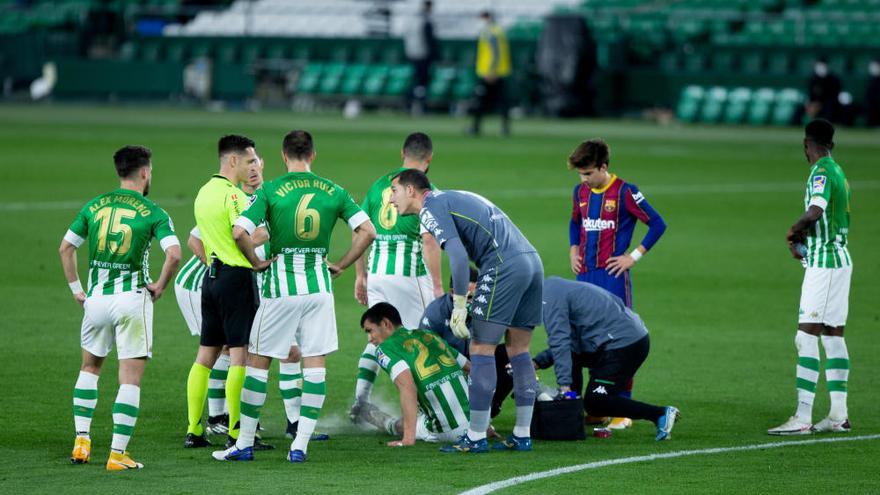 The Barcelona added his sixth consecutive victory in LaLiga (2-3) after coming back in a second half a 1-0 with which the Betis, who saw how the presence of the Argentine Leo Messi made the visitors react after staying in the first period on the bench.

Messi made the tie as soon as he entered the field (1-1) and then the Portuguese Francisco Trincao achieved the final 2-3 against a rival who never gave up and he did a lot to at least stay with a draw.

It seemed that the coach of the Catalans, the Dutch Ronald Koeman, also thought about next Wednesday’s game again in the Andalusian capital, but at the Sevilla stadium, in the first leg of the Copa del Rey semifinals, and in the wear and tear that his team suffered last Wednesday in Granada, with extension included, to overcome the quarters. Thus, the Argentine Leo Messi stayed on the bench from the beginning and with him players such as Pedri González or the Dutch Frenkie de Jong, while, before Sergi Roberto was injured, he gave the squad Oscar Mingueza a place on the right side.

Betis coach, Chilean Manuel Pellegrini, also surprised with some notable absences of players who ended up fatigued last Thursday in the quarterfinals in a Cup that, like Barça’s, had an extension and this time with elimination on penalties against Athletic Club. Sergio Canales and Argentine Guido Rodríguez, basic players in the starting lineup of the Verdiblanco team, also came from recent injuries and Pellegrini chose not to force them from the start despite the fact that Betis now has the whole week to rest.

Despite these reservations in the two coaches, their teams maintain interests in the championship, with the Barça with the intention of holding on in second place and the Betis wanting not to lose the wake of the European positions after being undefeated since 2021 began.

The visiting team found themselves at the first change, when the teams were in the study phase and with exchanges of blows, with the injury of the Uruguayan central Ronald Araújo, who hurt his left ankle after a bad gesture and this prevented him from continuing , so De Jong replaced him.

Barça rebuilt its drawing on the field against Betis who wanted to be the protagonist of the clash against an opponent in which the Frenchman Ousmane Dembélé was the one who moved better between the Verdiblancas defensive lines. Thus came a good local approximation, with a pass from Borja Iglesias that Juanmi Jiménez did not arrive clearly to finish off with a header, to which the visiting team replied with a cross from Jordi Alba and a header from French Clement Lenglet without giving him the right direction.

When the zero draw was foreshadowed in the first half, a good against Betis was culminated with a center from the Brazilian right-back Emerson Royal and the good definition of Borja Iglesias to make it 1-0, his third goal in this tournament.

In the second part Koeman entered Pedri from the start by the Danish Martin Braithwaite to change the offensive dynamics of his team, but it was right-back Óscar Mingueza who soon had the opportunity to tie with a strong shot to which Joel Robles responded perfectly and shortly afterwards it was Juanmi who put the player to the test. German goal Marc-André Ter Stegen. Barcelona did not see it clearly and before the first quarter of an hour of the resumption was fulfilled, Messi entered with the Portuguese Francisco Trincao.

Two minutes of the Argentine on the field of play were enough to put the tie by finishing strong, low and adjusted to a stick and thus adding the 13th goal on his account in this League. The visiting formation was another, much more vertical and with dangerous approaches such as one by Dembélé to which the Betic goalkeeper responded, who could not prevent central Víctor Ruiz from scoring an own goal after a faulty shot from the French Antoine Griezmann.

In nine minutes Barça turned the scoreboard around, but Víctor Ruiz retaliated and soon achieved 2-2, with a header after a precise free-kick from the French Nabil Fekir, and that definitely broke the game, which in its final stretch was able to opt for either side, although Betis, with Guido Rodríguez, Canales and Loren as refreshments, put a lot for the points to stay in Seville.

Despite this, it was the Barcelona player Trincao the one who signed a great auction who entered brushing the crossbar to put the 2-3 with three minutes to go until the regulation time was fulfilled.

Incidents: Match of the twenty-second day of LaLiga Santander played at the Benito Villamarín stadium without an audience.