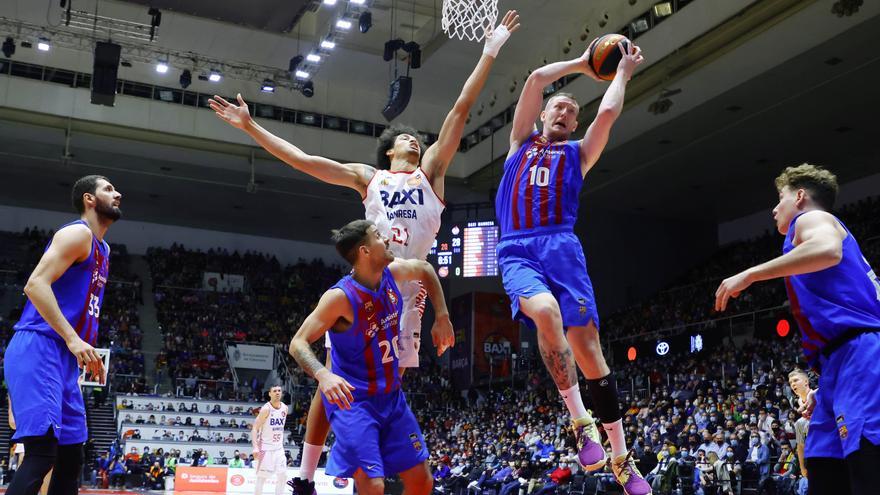 The third time was the charm and, after losing in their two matches this season against BAXI Manresathe Barca managed to disarm this Friday the great revelation of the ACB at the most opportune moment, a knockout tie for the quarterfinals of the Copa del Rey in which was very superior and exhibited muscle to warn his rivals that this year he arrives in Granada with the aim of adding his fourth title of the last five years (107-70).

The people of Manresa, who they only looked alike in the first quarter to the version that has taken him to the third position of the table and to return to the KO tournament after 17 years of absence, they could only offer will and work, but they were diluted before the superiority of a culé team that arrived on a streak, with seven consecutive wins, and that he presented his candidacy to revalidate his crown in his cupbearer debut, although before that he must beat UCAM Murcia in the semifinals.

Pedro Martínez's team only resisted in the initial act. His best staging, with a fast game and choral success in their first attacks, translated into the first advantages of a battle in which Barça seemed to enter with the handbrake on and with only two triples from Sertac Sanli and Dante Exum as meager baggage in the first four minutes, which Sarunas Jasikevicius did not like who was screaming in the band and called his team to order for the first time when they were 6-14 down.

The move had no immediate effect. The azulgranas still did not appear at the Palacio de Deportes de Granada and were already down by twelve points at the halfway point in the first chapter of the quarterfinal series. True to their style, Pedro Martínez's players complied with the established plan and continued to grow against the poor rival defense with outstanding shooting percentages.

Until the defending champions pressed back, adjusted lines and took advantage of their individual quality to tighten the scoring under the baton of Nick Calatheswhich put order in the until then disjointed culé attack, in which Brandon Davis It was growing with the passing of the minutes (22-26, min 10).

Gradually, the attack from Manresa slowed down due to the greater aggressiveness of Barça, who tucked back and applied his style book more effectively than at the beginning. Roland Smith culminated the comeback with a frontal triple and ended more than eleven minutes of rival dominance.

The tables had turned and now it was Jasikevicius's men who, aided by their defensive strength, saw hoop more easilywith the first flashes of Nikola Mirotic and Rokas Jokubaitis, which allowed him to take off on the scoreboard with income of up to thirteen points and with the reappearance of Álex Abrines five months after his knee operation as the best news.

The break came with Barça top ten (52-42) after a second quarter that they dominated with authority (30-16) and after the restart things got worse for the Bages team because they conceded a 9-0 start that began to tip the balance in favor of the azulgranas too soon.

Be careful that the wick of @nicolapro7 it has a lot of spark.

Two triples with the signature of Mirotic and another pair scored by Nico Laprovittola definitely fired at the current champions, who got +25 midway through a third quarter in which they also found no opposition and went into the last ten minutes with their homework done and their minds set on Saturday's semifinal against UCAM Murcia (88-53, min 30)

As expected, the last act of the Catalan duel left one and the other. The azulgranas, reserving troops for their next cup match and distributing minutes and the people of Manresa trying to make up a bulky scoreboard that does not erase the great season they are having.

Incidents: Fourth game of the quarterfinals of the Copa del Rey de Granada played at the Palacio Municipal de Deportes in the Andalusian city before 6,707 spectators.