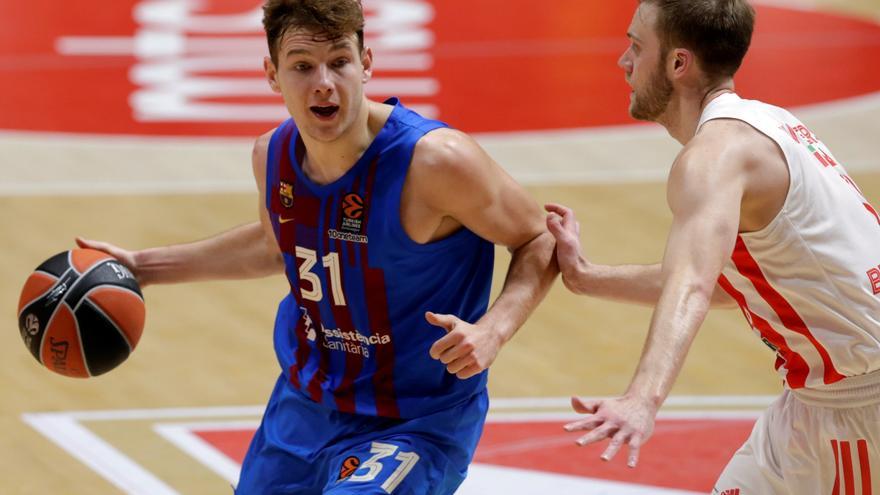 Barça defeated the Red Star in Belgrade on Tuesday (69-76) in a very close match that was not decided until the last quarter thanks to the greater success in the triple by the Catalans (9 of 18 by 3 of 20 of Serbs).

Although Barça opened a quick 11-point lead, Estrella Roja closed the gap at half-time (31-34) and it wasn't until the third round that the Barça team escaped on the scoreboard thanks to the perimeter working (49-61) , managing to contain the Serbian push in the last period.

Under the watchful eye of Serbian tennis player Novak Djokovic, present in the noisy pavilion, the Catalan team consolidated the lead in the Euroleague (13-2) with forward Nigel Hayes-Davis (14 points and 8 rebounds) as the most outstanding player.

Barça opened the scoring with baskets from power forward Nikola Mirotic and center Sertac Sanli in the low post (0-5, min.2), but opened the first lead in double digits thanks to the Turkish's outside success (7 points) and forward Sergi Martínez, author of two triples (5-16, min.5), under the fluid direction of point guard Nico Laprovittola.

After the first time-out of Montenegrin Dejan Radonjic, the Red Star defended more aggressively and, while Barça lost offensive rhythm with their starters on the bench, they cut distances at the end of the first quarter (13-20) led by the forward's score Luka Mitrovic, leading scorer at halftime with 11 points.

The start of the second quarter confirmed the Barça jam in attack with Rokas Jokubaitis as base while the Serbian team continued to grow from defense and, despite its 0 of 6 in triples, managed to tie the game after the first time-out of Jasikevicius (20 -20, min.14).

On the seventh attempt from the perimeter, the Red Star culminated the comeback (23-22, min. 15), although the return to the court of Laprovittola and Sanli (Barça's top scorer at halftime with 9 points) oxygenated a Barça attack (23 -26, min. 15) usually too slow.

The dominance of the pivot Ognjen Kuzmic on the rebound (7 offensive, 9 in total at halftime) allowed the Serbian side to score in second chances, reaching the result 31-34 at halftime.

Two triples by Laprovittola and another by Hayes-Davies boosted Barça again (35-43, min. 22), but the scoring breakthrough by Nikola Kalinic (11 points in the third quarter) kept the Red Star very close on the scoreboard ( 41-45, min.25).

When Barça tied Kalinic short, the Barça defense dried up Estrella Roja while in the opposite ring the inspiration of Hayes-Davis (12 points in the third quarter) found in power forward Roland Smits the best ally (46- 61, min.30).

Encouraged by 6,849 spectators, the Red Star redoubled its defensive aggressiveness, before the offensive jam of a Barça that abused the clarifications of an unfortunate Brandon Davies in the low post, and fought each ball near the basket until Kalinic placed the 63-70 (min.36).

Jasikevicius's time-out did not disturb Red Star, who with a triple by Markovic moved to three points (68-71, min.38) but a defensive rebound from Hayes-Davis to 1.18 for the end and Mirotic's success in the hot possessions they allowed Barça to achieve a sealed victory with a triple by Kuric with 30 seconds left.

Incidents: Match of the fifteenth day of the Euroleague played at the Aleksandar Nikolic Hall in Belgrade (Serbia) before 6,849 spectators.