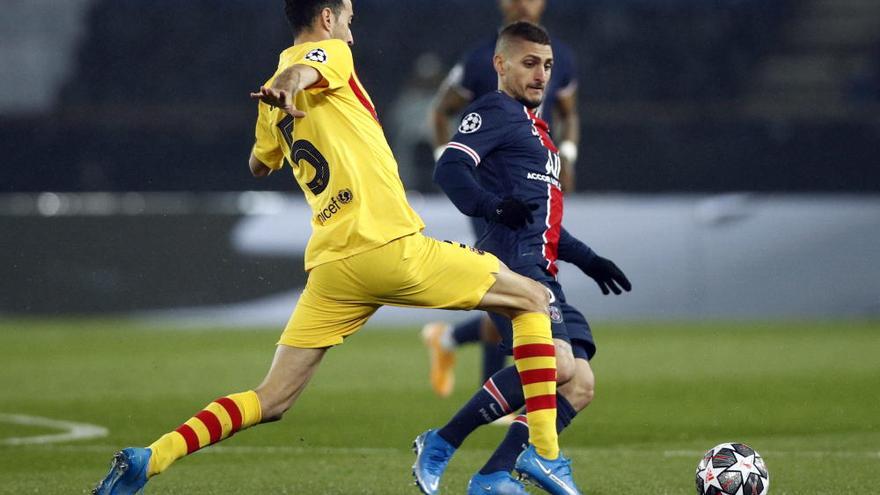 The comeback in the Champions League of Barcelona that it seemed impossible in the Parc des Princes, to turn 1-4 at the Camp Nou against Paris Saint-Germain, he flew over the sky of the French capital with an exciting game by the Catalans, who crashed with an inspired Keylor Navas, who ruined his dream (1-1).

Up to 10 stops signed the “tico”, including a penalty to Messi, who kept his team standing in the face of an avalanche of play from the visitors, who left an imposing image, although they lacked success in the face of goal.

It had been a long time since Barça had the feeling of being able to address a great away from the Camp Noubut a hefty first-leg handicap kept them out of the Champions League quarter-finals for the first time since the 2006/2007 season.

The Spanish team gripped the Parisians, who saw the ghost of the 2017 comeback gliding before their heads, but who ended up saved by their goal and will be in the quarterfinals for the second consecutive year, having reached the final last season.

Without Neymar, injured, on the field, PSG survived a high-carat game in the first match of Joan Laporta in the box as president-elect of Barcelona, ​​although still without powers.

Barça arrived with a slab that only illusion could lift and the Catalans did not lack will, dressed in yellow on the rainy Parisian night, to generate games and occasions that turned a scoreboard that seemed impossible.

With three behind and De Jong as free, those of Ronald Koeman went for all, dried Mbappé, his executioner in the first leg, and cornered PSG, who had warned that he would go for the victory but was forced to reduce water before the rival whirlwind.

Dembelé’s speed was a stiletto, he broke the Parisian back again and again, but he lacked dynamite when he did not meet the inspired Navas and the impossible comeback only seemed possible because of the good image of Barça.

The French attacker, placed in the position of 9, fed the dream three times in a quarter of an hour as PSG dwindled, hanging from some Mbappé boarding school, whose danger continued to weigh on Barça’s memory after his great performance in the Camp Nou.

The duel seemed summarized in a face to face between the two FrenchAlthough the PSG player was more afraid, he placed Mingueza with a card and gave his team some oxygen, although he continued to be subjected to the Barcelona dictatorship.

Dembelé followed and the Spanish team lacked the efficiency to put the icing on the cake for their good performance.

After half an hour, a recklessness by Lenglet, who stepped on Icardi, went unnoticed by the referee but not by the VAR, which allowed Mbappé to score his fourth goal in the tie with a penalty.

Barça, which maintained the obligation to score 4, continued to believe with the same weapons and soon deserved the draw, which after a shot to the crossbar by Dest, only came in an impressive shot by Messi from 35 meters that slipped through a Navas squad, the only way to overcome the “Tico”.

The Argentine was able to overtake him again in the twilight of the first half, after a Kurzawa penalty on Griezmann, but Navas guessed the trajectory and rejected the shot of the maximum penalty that bounced off the crossbar.

The failure of Messi’s penalty weighed on the morale of Barcelona, ​​which came out less eagerly after the break, without the same faith after seeing how all the deployment of the first period had not served to prop up the comeback.

Pochettino modified his device somewhat, pressed higher and it cost Barcelona more to settle in the rival area.

Despite this, some chance was sought, less than in the first section and with the same bad success of the attackers and the good of Keylor, who again proved decisive.

PSG suffered less as the minutes brought them closer to qualifying and the fear of the comeback was waning.

Incidents: Second leg of the Champions League round of 16 played at the Parc des Princes in Paris behind closed doors due to the pandemic. Debut in the box as president-elect of Joan Laporta’s Barcelona in his second stage at the head of the Spanish club.