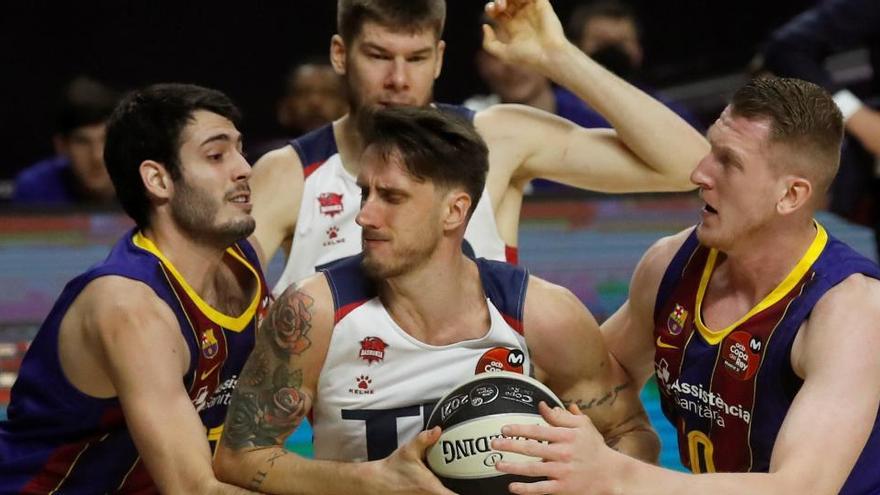 Barça Y Real Madrid will reissue this Sunday, two years after their last appointment, the cup final repeated in the last decade after the undeniable triumph of the Catalans in a semi-final with little history, in which he dispatched with a choral game and his dominance in the rebound to an unknown TD Systems Baskonia, whose reaction was not enough in the last quarter (77-68).

Because the people from Vitoria only stood up at the beginning and when it was too late. His best staging, with a Pierria Henry plugged in who monopolized the whole game of his team and scored ten of his first twelve points, it was a mirage, because midway through the first quarter there was a collective blackout that had the Vitoria players for more than five minutes without adding a single basket.

With a thick game and continuous errors in attack, they also lost the battle under hoops and were not at all like the version offered the day before.

In addition, as the triples did not enter them, the Barça was growing with the passage of the minutes, although it did not walk very much either. First Nikola Mirotic and later Corey Higgins they did damage to a defense that was clearly outmatched on the rebound, which translated into the Barça advantage at the end of the first ten minutes (15-12).

The second quarter passed along the same lines. Without ideas in the attack from Vitoria, which missed eight of the nine triples it tried in the first half, Barça took the opportunity to escape based on external success. Abrines was first, followed twice by Mirotic and Hanga. With those four triples, the advantage at halftime was already beginning to be worrying (38-27. Min 20).

In the first 20 minutes, the Catalans added 26 rebounds, 12 of them offensive, by twelve of their rival, who only distributed an assist in that period and lived off a Henry who contributed 15 of the 27 points of the Basque team. Little baggage to sneak into a final Copa del Rey against a rival like him Barcelona.

A 6-0 start after passing through the changing rooms further complicated the situation. Those of Dusko Ivanovic, who saw themselves in the blink of an eye seventeen down, linked a 7-0 in favor thanks to a tiple from Henry and another from Rokas Giedraitis that came accompanied by an additional free kick. That is where his reaction ended, because the game’s script was the same as before.

Because the Barça did not wrinkle and followed his own, trusting everything to his defense, to his abuse under hoops and to the inspiration of a Kyle Kuric that combined his usual success with his contribution on the rebound. To this I added the tranquility that comes from having an income of more than fifteen points, although I knew that I was facing a rival you cannot trust.

The last quarter was reached with those of Jasikevicius with half a ticket for the final in their pocket (64-47, min 30). Despite losing by 20 points, the Baskonia He kept trying, and with the help of Achille Pollonara, he got to six after five consecutive points from the Argentine Luca Vildoza, who tightened the semifinal after a 16-5 partial (69-63, min 35).

Doubts entered Barça. Jasikecicius stopped the game immediately to avoid shocks last minute because his men were now the ones who did not give a right. Jekiri cut the disadvantage to four points, but the Baskonia rebellion reached that point, because the game became an exchange of free throws that benefited the Catalan team, which will return to a cup final two years later, against the same rival, the Real Madrid, and on the same stage as then.

Incidents: Second semifinal of the Copa del Rey in Madrid, played behind closed doors at the WiZink Center.