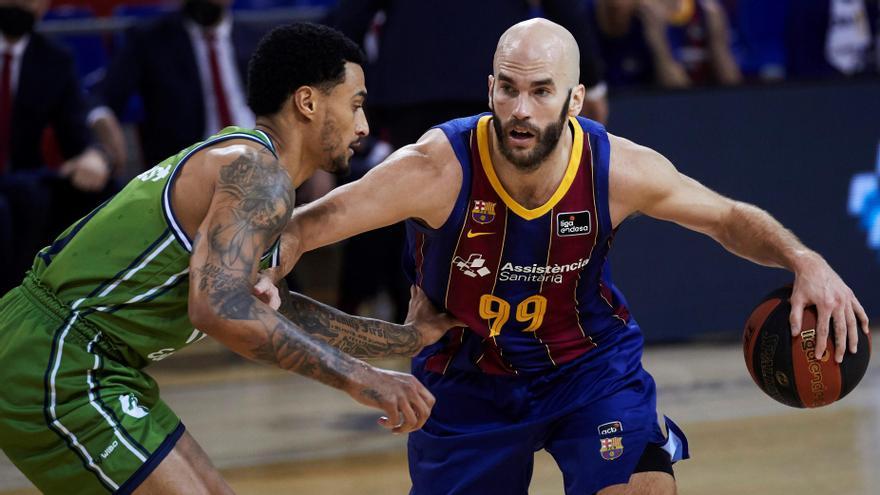 The highlight of the Barça did not meet resistance in the Movistar Students, which he defeated by a spectacular 98-68 with the historic mark of 64 points at halftime (the Barça team had not achieved such a high score since the 1989-1990 season), and thus chained his fourteenth consecutive victory in the ACB League.

Nikola Mirotic was the main protagonist of the match with 18 points, shielded by Kyle kuric, 15 points and 19 valuation. The performance of John Roberson (13 points and 15 valuation) and Aleksa Avramovic (14 points), the best players of the Estudiantes in a Palau Blaugrana that counted on the presence of the new Barça president, Joan Laporta, was useless.

The bad news for Sarunas Jasikevicius’ men, who also added their ninth consecutive win among all competitions, is that they follow two wins from Real Madrid because those of Pablo Laso also won this Tuesday their match postponed, in his case by 71-87 against the Monbus Obradoiro.

The match began with an exchange of triples and counterattacks that placed a 12-10 (min.5) on the scoreboard with Juan Jose Barea in a stellar plan, scoring 8 of the initial points of the Students. But Barça quickly put the batteries and the hand of Nikola Mirotic, who achieved 11 points in the first 5 minutes, extended the score to 22-10 (min.6).

The distance already began to be worrisome for Estudiantes after Kyle Kuric’s triple and consecutive layup that meant that Barça doubled the Madrid team on the scoreboard at end of the first quarter with 33-15.

But the second started with a 0-7 run by the schoolboys (33-22, min.12) that forced Sarunas Jasikevicius to request a timeout. Then his players reacted with a partial of 11-4 (44-26, min. 15) that included two triples from Kyle Kuric and another from Leandro Bolmaro.

Barça reached the break with a historic 64-39 and the battle for the rebound won by 26-13. But before Nikola Mirotic put a new maximum difference on the scoreboard with 63-36 (min.20).

Surprisingly, at the beginning of the third quarter the Barça team did not score during the first four minutes. The Montenegrin center ended the drought with a triple (67-44, min.24), but Jasikevicius continued to be angry on the bench for the bad quarter of his team, who met a great Adams Sola in the student defense.

Despite the fact that Barça only scored 13 points in the third quarter, were enough to extend the maximum distance to 30 (77-47) because the Students stayed at 7.

The last 10 minutes were totally inconsequential, with the two teams already with their eyes set on the next commitments, and the baskets were exchanged without the fenders showing too much rigidity nor the attacks a special success.

The locals took advantage of it to extend the distance on the scoreboard, with a 94-56 in the 36th minute as the maximum difference before the final 98-68.

Jasikevicius’s Barça gave one more demonstration of its voracious hunger, demonstrated against any rival that gets in front of it, and it only has in mind to lift all possible titles this season. The King’s Cup it is already in the museum. On the horizon await the ACB League and the Euroleague.

For its part, El Movistar Estudiantes stayed very far from the feat of April 1, 2018, when it won at the Palau Blaugrana by 95-100. Despite this stumble, he is still out of the danger zone with eight wins, two above the descent.

Incidents: Match of day 20 of the ACB League played without an audience at the Palau Blaugrana due to sanitary restrictions due to the coronavirus pandemic. This meeting should have been played in January, but it was postponed due to several positives for coronavirus at Movistar Estudiantes.

Atlético resists the final arreón of the Real