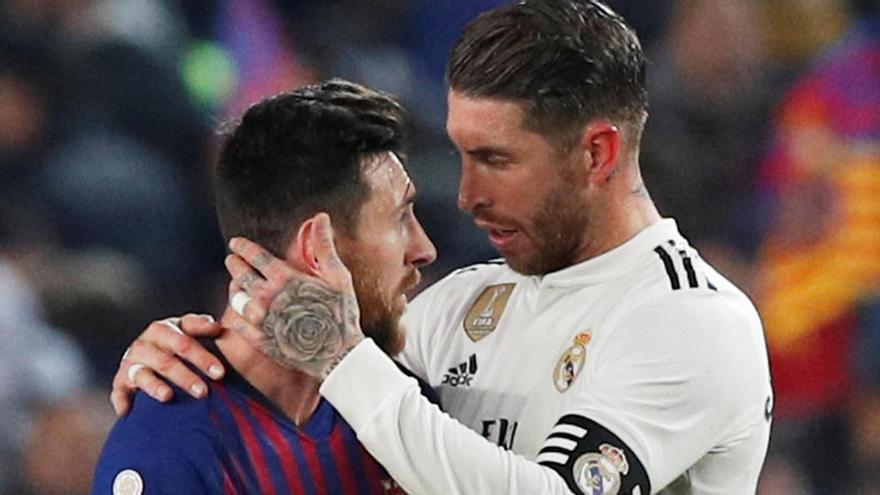 The great classic of Spanish football, the Barcelona–Real Madrid, it will be for once the classic of silence. Because of the pandemic it will be played without an audience, without the pressure of the stage and with the ball and the ambient sound as the absolute protagonists.

A classic without noise, without so much morbid and with two teams that are not going through their best moment. Real Madrid is worse off, having lost the last two games and against lesser rivals (Cadiz Y Shakhtar Donetsk; while Barça remade its first league defeat (1-0 in Getafe), with a soothing European win (5-1 against Ferencvaros).

Ronald Koeman will make his debut on the Barça bench in a classic and will try to ensure that the youth revolution, with Ansu Fati and Pedri as banners, allows him to reinforce his project, which has seen a few positive things. He decided as soon as he arrived to change the drawing and order a double pivot, three midfielders and Leo Messi up. A 4-2-3-1 that can be a 4-2-4 and a 4-5-1, but above all what has been seen to his Barça is that he has “fresh legs” to stand up to anyone.

The arrival of Pedri, Trincao and Sergiño Dest have given the team another energy, but above all, Barça has begun to build a new path after that earthquake that led to the 2-8 score against Bayern Munich in Lisbon. From that, the team can recover little by little, but it is difficult for the board, which is cornered by a motion of censure, Barçagate and that burofax sent by Leo Messi in which he asked Bartomeu to leave Barça.

Messi has pending accounts in which It could be your last home classic. He has not scored in the last five games against Real Madrid. Tomorrow he will play his classic 44 and chain two years, five months and eighteen days without scoring a goal for Real Madrid, one of his favorite victims. The Argentine is the player who has scored the most goals in the history of the classics (26), but the last goal of the Rosario striker against Real Madrid dates back to May 6, 2018, in the match of the 36th day of the League that finished in a draw (2-2).

In the lineup, Koeman has different doubts. It remains to be seen if Jordi Alba, recovered from a hamstring injury and with discharge in hand, plays from the start. If Alba plays on the left, Dest and Sergi Roberto would compete for a place in lane two; if Alba doesn’t come out; Dest would be the one chosen to play on the left. In the double pivot, Busquets and de Jong are favorites ahead of Pjanic; While Griezmann, Coutinho and Ansu, with Messi at the top, seems the most likely alignment.

For Real Madrid the classic appears as a turning point. The perfect setting to take flight and bury the doubts that arise about the project and even about the figure of Zinedine Zidane, after two consecutive losses at home against lower-class teams. The image of weakness left against Cádiz in the League and Shakhtar in the Champions League debut, have installed concern in the white house.

However, the criticized Zidane is a guarantee of success at the Camp Nou, where he was never defeated in his five visits. With a project without signings, with which he should be a great reference, Eden Hazard, spending more time in the infirmary than on the pitch and without any of his right backs, the French coach must rebuild his team by appealing to the commitment of a group of footballers who always got his message across. You need them more than ever and expect an immediate reaction.

Nothing better for your interests than to recover the true leader of Real Madrid. Sergio Ramos, the king of the classic, is recovered in time from his left knee to dispute number 45, one more than Messi. Real Madrid appeals to his image of claw for reaction after an unexpected crash. With the defensive security that prompted him to conquer the League after confinement disappear, the white team has become vulnerable.

And a high-altitude duel requires correcting the tactical imbalances of a team that is not linked to pressure and that breaks down due to its bad withdrawal after loss. With Courtois as savior, Nacho points out as a ‘patch’ of the problem on the right side and the return of Mendy to the left. The strength for the fight in the center of the field will be given by Zidane with the Casemiro-Fede Valverde couple, who will be accompanied by Kroos.

Zidane’s doubt lies in the system due to the low performance of some of its parts. Isco is not for big dates, Hazard still has it left and Martin Odegaard is missing hooking. Marco Asensio appears as the option with the most starting options together with a Vinicius who once again represents the hope of Real Madrid for being the only one who contributes something different and the indisputable Karim Benzema at the top for a classic that will cover problems or cause an earthquake.

Tags: boat, crisis, looking for, Madrid, to turn off

Rahm: “I keep a journal because I take mental work very seriously”

Brazil beats Mexico on penalties and waits in the final

Rafa Nadal: “My body decided for me not to go to the Games”