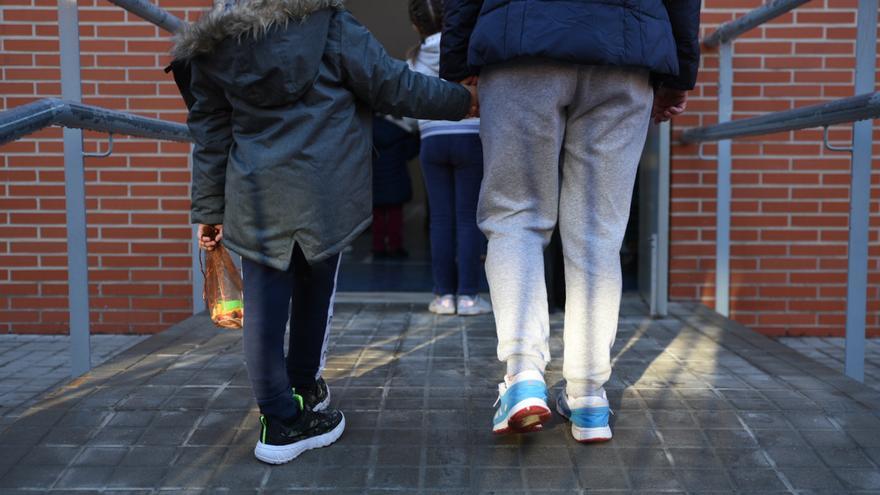 When Lucía discovered that her husband was sexually abusing their ten-year-old daughter, born from a previous relationship, the nightmare began. She denounced and the man was sentenced to five years and six months in prison. But he has already served his sentence and now, once out of prison, he has asked the court for a modification of the visitation regime with the son they both have in common. She claims to be with him two afternoons a week, alternate weekends and during vacation periods, but Lucía fears for the minor's safety and opposes it. She asks the court to take into account that although she has already been released from prison, she is still disqualified from working in contact with children.

This was dictated by the Provincial Court of Valencia in 2017, a sentence that was confirmed by the Supreme Court months later. The ruling considered proven that, between the summer of 2015 and April 2016, the man repeatedly sexually abused his wife's daughter, who reported what happened to her mother after attending a Civil Guard talk about bullying. The whole family lived in the same house. The justice sentenced him to five years and six months in prison, prohibited him from approaching the victim for ten years and added four years of supervised release. It also disqualified him for eight years and six months to practice any profession with minors because the crime was "continued and for the duration of it," the sentence specifies.

Lucía fears that what her ex-husband, with whom she spent seven years, will repeat with her daughter or that "he may want to take revenge on me and harm the child in another way," she says. The woman puts the focus on the fact that although she has finished her prison sentence, she still has years of probation pending and the restriction of jobs related to childhood. "I understand that this measure is put in place to protect minors, my son is a minor like others," says Lucía, a 32-year-old from Valencia. The man, for his part, has declined to make statements through his attorney.

After leaving prison last October, he filed a lawsuit in court to modify the parent-child measures that he justifies by pointing out that the minor, who is 12 years old, wants to be with his father and "the constitutionalized reinsertion function of the sentence" . But, as he anticipated The country, the decision is still pending what the court decides, which given the complexity of the case has asked the Institute of Legal Medicine to evaluate the minor and the parents and assess whether the hearings should be granted and how. Five months have passed since then without the specialists having cited them yet.

While the judicial process is being resolved, the paternal grandmother has seen the minor since her son entered prison. This is stated in a sentence at the end of 2017, in which it was established that the visits would consist of one weekly afternoon and one weekend per month with an overnight stay. Once the man was released from prison, Lucia demanded that they be modified. "When she left prison she went to live with her mother, so I had the feeling that giving the child to her was like giving him visits because at first they spent the night at home," explains the woman.

The justice agreed to Lucía's claim with the support of the Prosecutor's Office and ruled that the grandmother could see the minor one afternoon a week and one Saturday a month without being able to leave the town of La Safor (Valencia) where the child lives. child with his mother. As the father lives in a different municipality, the judge understood that this was the way "to guarantee in a certain way that the father does not approach and gives the mother some peace of mind," reads the ruling. Lucía, however, denounces that "no one supervises that this is fulfilled": "I am not opposed to the grandmother seeing the child, but the sentence has ruled that she cannot have contact with her father."

During the man's stay in prison, contact with the minor was limited to phone calls two days a week supervised by the maternal family. A contact that, according to Lucia, ceased to occur. "His mother told me that the prison cabins had been damaged and stopped being made." For the woman, this contact was not innocuous, she assures her. In fact, the Dénia Women's Center came to assess how these contacts and the process in general were affecting him psychologically. "In a call she told him that he was in jail because her mother did not love him and she had put him there," the evaluation report cites.

The woman went to the women's center for the first time a few months after filing the complaint for the sexual abuse committed against her daughter "in order to overcome the emotional consequences" derived from it, but she also said that she was a victim of psychological gender-based violence despite never having filed a complaint. "She has been the victim of a situation of serious psychological abuse by her husband," reads the report. Among the indicators that she cites are "yelling", "disparagement in public and private", "socio-family isolation", "emotional blackmail", "impeded decision-making" and "economic control".

The sexual abuse of her husband towards her daughter has been for Lucía "a real nightmare" that has not yet ended. She has been off work and under psychiatric and psychological treatment for suffering from anxious-depressive symptoms and feelings of guilt for not having detected the abuse that she committed against the girl at home until she did not verbalize it.

The judge and founder of the Association of Women Judges, Lucía Avilés, assures that the background of the case "is a situation of gender violence understood in the broad sense" and believes that, as such, it should be valued. "What happened has not directly affected the minor, but indirectly because in the end it is a context of sexual abuse in the family in which that child is inserted and in which the victim was inserted," describes the magistrate, who affects that "what should prevail is the principle of the best interest of the minor".

There are several elements that Avilés believes must be taken into account to make the decision, among them, the evaluation of the child and the context, but also having a final sentence for abuse, using the home for it, and the penalties that have not yet been have been fulfilled. "There is no conviction for having attacked the minor's legal assets, but there is a penalty that has to do with the well-being and development of minors in general," he says, referring to disqualification from working with children. "If we talk about the fact that an abuser is not a good father, extrapolating it to this area, we cannot use a visitation regime as an open road to a possible risk," says Avilés, who is committed to limiting visits.

Josep Tamarit, Professor of Criminal Law at the University of Lleida, points out that "there is no single answer" and calls for a case-by-case analysis. "All the elements will have to be assessed and the most decisive thing will be the evaluation report that is made, always taking into account the best interests of the minor," he says. Even so, he rules out that the penalty of prohibition for work with children should have "too much weight" because the sentence "refers to trades and the parental function is not, it is not the same."

In this regard, Avilés reflects on the tendency "to focus prevention in the public sphere", for example, with the usual penalty of disqualification for passive suffrage or, in this case, for working with minors, "but at home What's going on?" asks the magistrate. Both experts, yes, remember that the law allows a wide margin between not carrying out visits or making them open; Among the possibilities are that they be supervised, in a Family Meeting Point (PEF) or gradual.

For their part, some 70 organizations that work with victims of sexist violence and sexual abuse who were aware of the case called last January for the General Council of the Judiciary to "adopt the necessary measures to adequately protect the interests of the minor", since they consider that carrying out the evaluation at the Institute of Legal Medicine proposed by the judge is "useless and unnecessary" since the parent "has not yet served part of his sentence, the one that prevents him from having regular and direct contact with minors, which includes to his own son."