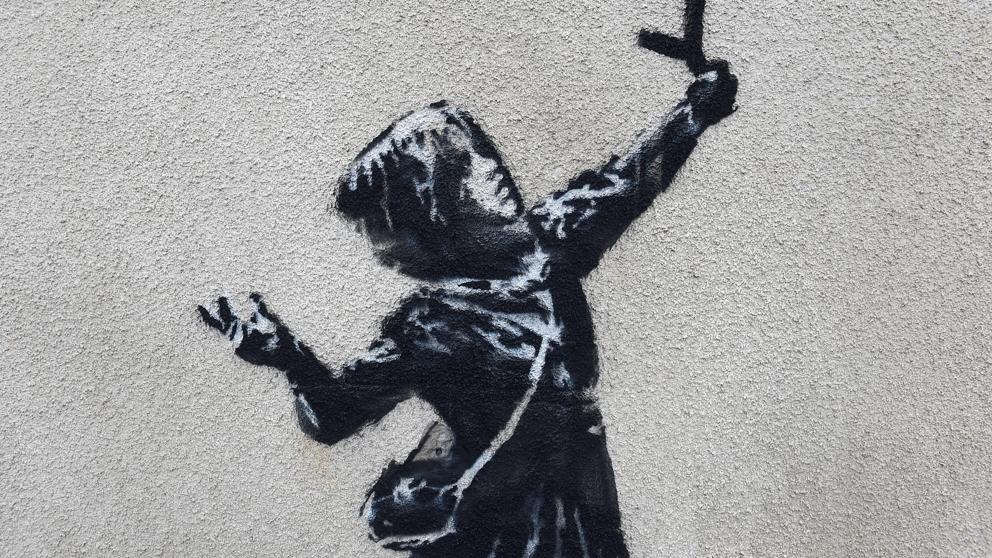 No one (or almost nobody) know who he really is Bansky, but his works bear a stamp so proper that at first glance you can know if he is behind or not. This Thursday a new mural in Bristol (to the west of England), a city from which the artist is believed to be originally, and has already been interpreted as his gift for valentine.

As soon as the new painting appeared, there were those who doubted the authorship because these works are never signed. Bansky He usually claims that they are his by sharing them on his official Instagram account and that publication finally arrived during the early morning. The graffiti artist has shared a gallery in which the mural is seen from two different angles and does not add any comments.

The girl shoots a red flying object with a slingshot

At the moment this mural has no name. The protagonist is a small girl, in black and white, armed with a slingshot that has shot a red flying object, which has exploded and left a flower stain. Some of those red petals have fallen on the Marsh Lane street sign.

The work mixes the innocence of a girl with the violence. It can also be interpreted as the small thing that has shattered is a heart that was floating, one of those so typical that they are drawn by Valentine’s Day. This young woman seems to be fine with her slingshot and does not need love in her life.


This street artist usually attracts attention when painting over social issues and add elements of darkness to scenes that would otherwise be cheerful. One of his last works was the one he painted in Birmingham last December on the housing problem. He drew two flying reindeer pulling a homeless man in a sleigh that was really a street bench.

Jeff Tweedy: Power Back | North American Route blog and beyond

The day the militiamen destroyed the Sacred Heart of Jesus

The day the militiamen destroyed the Sacred Heart of Jesus