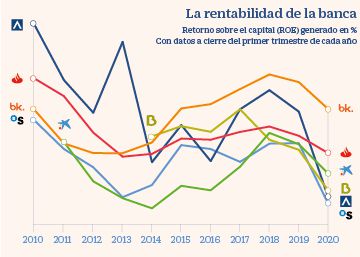 Spanish banks are facing the economic recession that is following the current health crisis, derived from Covid-19, with the lowest profitability levels on own resources (ROE) in the last five years. And is that inability to generate income due to negative rates that have weighed on the sector for the last year millionaire provisions have been added that banks have had to equip during the first quarter of 2020 to face the impact of the coronavirus on their businesses and that have weakened an already low profitability.

The most affected entities have been BBVA and Sabadell, whose ROE is at a minimum. According to the historical data available at the CNMV, neither of the two banks had registered a close for the first quarter of the year with such low profitability. The entity chaired by Carlos Torres registers a return on equity of 2.4% compared to 10% recorded at the end of the same period in the previous year. In the last ten years, BBVA’s lowest indicator had been 5.5%, registered in March 2014, when the sector faced the final stretch of the economic crisis that began in 2008.

For his part, Sabadell’s ROE ratio has fallen to 1.82% from 7.19% obtained in the first three months of the previous year. The entity chaired by Josep Oliu had already registered profitability levels of less than 2% in several quarterly closings in recent years, partly due to the technological integration problems that came up with its British subsidiary TSB. Overcome its particular crisis, the entity had raised the ROE rate (from 5.53% in March 2017 it increased to 7.15% in 2018 and 7.19% in 2019), but after provisioning 213 million to cover possible defaults by the virus is currently the Ibex bank that generates the least return.

The rest of the listed banks, despite having had falls, have not been as pronounced. Bankia has reduced its profitability by 3.6 percentage points at the end of the first quarter with respect to the ROE it obtained in March 2019. The entity chaired by José Ignacio Goirigolzarri, since becoming Bankia, registered its first profitability in the first three months of the year in 2014. In previous years there is no the data given that either it had losses or its own funds were negative.

In the case of CaixaBank the Catalan entity reached the lowest levels of the last ten years in the final blows of the previous crisis (it registered an ROE of 1.4% in March 2014). Since then it had not stopped increasing the ratio thanks to its commercial strength, until achieving an ROE of 8.1% in the first quarter of 2018. In 2019, due to the negative rates, the upward trend broke and this year, after provisioning 400 million, profitability has fallen to 4.5%.

For his part, Bankinter continues to be the Ibex entity with the highest profitability on own resources. Despite having reduced its ROE rate by 2.39 percentage points, to 10.23%, in the last twelve months, it is the only bank that exceeds the 10% threshold. In fact is the only entity that would manage to cover the cost per capital, that the Bank of Spain places, precisely, around that 10%,

The bank that has suffered the least from its profitability at the end of March 2020 has been Santander, which faces the crisis with provisions for possible deterioration of 1.6 billion euros. In March 2019, the entity chaired by Ana Botín registered an ROE of 7.85% and at the end of the first quarter of 2020 it has yielded just 1.54 percentage points.

Away from double digits

Spanish banks face the economic crisis with a better liquidity and consolidation position than in 2008. In fact, thanks to its capital, it is alleviating the first impacts on companies and individuals through aid to financing and credit payments. In addition, the financial sector is expected to act as a motor to reactivate the economy when the health crisis and stoppage cease. in the activity.

However, in 2008, before the recession broke out the entities had profitability levels that today seem unattainable. In March of that year BBVA registered a return on equity of 27.4%, Sabadell 20.39% and Santander 17.4%. Overcome that crisis, in the last five years only BBVA, in some years, and Bankinter, have managed to stay in double digits.