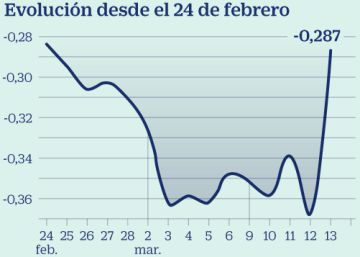 The panic over the economic debacle that the coronavirus may cause runs like wildfire through the markets. Not only in equities or oil, the Covid-19 is also strangling the interbank market. In other words, as it happened after the bankruptcy of Lehman Brothers, banks are beginning to restrict loans to other financial entities. Nobody trusts anyone anymore.

It is true that the Euribor, the average daily rate at which banks in the euro zone lend money, continues at an unprecedented negative rate. And close to the area of ​​historical lows in which it was located last summer. However, in recent sessions this indicator has rebounded with strong increases. The 12-month Euribor – which usually serves as a benchmark for calculating mortgage interest – stood at -0.287% on Friday, which is a strong advance compared to -0.368% on Thursday.

This same movement has been observed in shorter periods of the same indicator. The three-month Euribor, for example, stood at -0.428% yesterday, compared to -0.5% on Thursday. And the six-month-old has also skyrocketed in the past three days. Both are also indicators that companies take to place their debt issues on the market.

The tension has also reached other assets used in interbank loans: the money market. Specifically, the Treasury bills, one of the assets that banks exchange to go with them as collateral to the ECB liquidity auctions or that they give to their colleagues as collateral for liquidity. The yield, which runs inversely proportional to its price, of Spanish bills maturing in November shot up by more than 30 basis points, from -0.5% to -0.19%. The Italians are already trading close to entering positive territory.

The yield on these securities is already above the deposit rate, which is -0.5%. In other words, financial institutions prefer to park their money at the ECB, which charges them for this, rather than having short-term debt securities from these countries on their balance sheets. This occurs at the rate that the market quarantines all debt in peripheral Europe. The rates of the Spanish and Italian 10-year bonds advanced yesterday by 38 and 22 basis points, respectively.

Fed Chairman Jerome Powell himself acknowledged in his speech on Sunday night that they had detected tensions in the money markets. The Fed zeroed rates and decided to inject liquidity in abundance into the markets in coordinated action with the rest of the world’s major central banks.