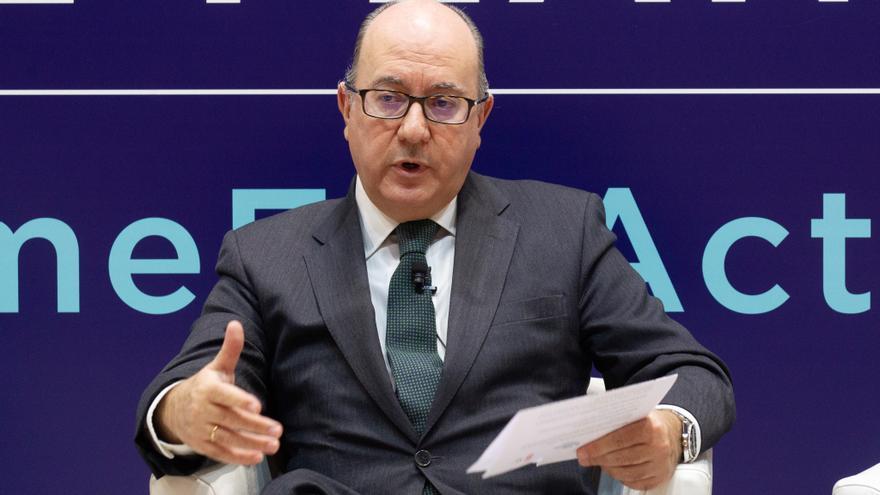 Santander, BBVA, CaixaBank, Sabadell, Ibercaja and, soon, Unicaja. Virtually the entire banking sector has been moving in recent months to cut costs by closing offices and laying off workers. The banks' employers, the AEB, defended this Tuesday that "there is still room" for more closures, according to the president of the organization, José María Roldán.

Roldán, who has advanced that he will leave office next year, has justified this journey that he still sees in the sector in which the number of offices "is higher per 100,000 inhabitants than the European average, double or more." The manager made these assessments when asking about the adjustments being negotiated by CaixaBank, which does not belong to the AEB but to the CECA, and BBVA and which occurs after a wave of closures announced by the rest of the entities since the end of last year . "Nobody talks about Germany or Italy, where closures are also being made," he pointed out.

The president of the employers' association has pointed out that the process is based on "adapting to changes in demand" in a context in which banks have to deal with "pressures on profitability." "It is natural that this occurs as customers are increasingly using digital channels," he said.

Roldán has proposed a series of alternatives to the closure of offices to avoid areas that are especially affected by bank exclusion. In this sense, the president of the AEB has recovered the idea of ​​creating "multi-bank" offices that unite the activity of different entities or that they are "multi-service". To this he has added that work must be done to improve the digitization of the rural world and improve education in the use of new technologies for the elderly population. "It is not necessary to throw in the towel in forming the majors", has defended.

The AEB has presented this Tuesday the results of its entities in a context marked by the pandemic. The president has warned that "uncertainty" is still high, although he has celebrated that delinquencies have not grown to date. However, it recognizes that defaults will grow as the measures that have been approved for social and business support are lifted. "The default does not reflect the latent damage in the balance sheets of the banks," he said. For this reason, it has not dared to rule out that the bank may have to make higher provisions due to the possibility of increasing losses in the future. "It is very difficult to predict the future with certainty," he stressed.

BBVA claims its results while negotiating the ERE

BBVA, one of the AEB entities immersed in a negotiation to cut jobs and offices, held its general meeting of shareholders this Tuesday. In it, the president, Carlos Torres, and the CEO, Onur Genç, had a turn to analyze the financial situation of the group. justified employment in economic causes.

This is how the entity raised it with the unions last week, after the first meeting of the negotiating table in which the adjustment figures were not yet raised. "Despite this environment and the high uncertainty, BBVA has obtained solid results in 2020, reaching a profit without singular of 3,084 million euros for the year as a whole. After a first quarter marked by the significant effort to anticipate provisions Due to the impact of Covid-19, the results have subsequently been improving quarter by quarter, "said Carlos Torres in his speech to the group's shareholders.

"In our ordinary business, before the impact of the provisions, the trend has been very good, despite the difficulty that it means that interest rates have fallen to levels never seen around the world," insisted the president of the entity. "The collective dismissal is going to be sustained for economic reasons (due to continued decrease in profits) and productive and organizational reasons derived from the digital transformation," CCOO pointed out after the first meeting with the entity's management last Friday.

Genç has continued in the line of the president of the entity during his speech. "In terms of profit before provisions, or net margin, which explains the underlying behavior of our operations, we have grown 11.7% in constant euros. This figure is the highest in recent years due to organic growth. This indicates our strong capacity to generate organic income despite the situation of the environment ", the executive celebrated on the results of the entity.