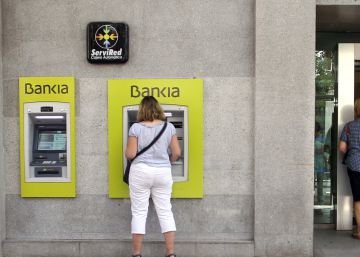 Nine years after being listed on the stock market, Bankia’s shares are trading at around 1.28 euros per share. This Tuesday, coinciding with the acquittal of the 34 defendants in the trial for the premiere on the market, the entity’s shares fell 3.53%. From the price of the Subscription Public Offering (OPS), the drop is 99%.

On July 20, 2011, the entity chaired by Rodrigo Rato starred in one of the most popular stock market premieres in recent years at a price of 3.75 euros per share, an amount adjusted for dividends, capital increases to rescue it and a contrasplit it would stand at 182.87 euros, according to Bankia on its website.

Under the slogan “become a bankero” the entity carried out an intense campaign to place shares among private investors, a process that from the first moment raised the suspicions of supervisors. Given the doubts that hovered, the CNMV decided to limit the exposure of retailers by creating a section of institutional that was equivalent to 40% of the 3,092 million captured. This did not prevent more than 270,000 small investors from being caught up in the operation.

Five years later, the Supreme Court annulled the acquisition of Bankia shares in PAHO, considering that there was an error in the consent because there was a gap between the figures contained in the prospectus and the real ones. To date, the bank has returned about € 1.9 billion to some 225,100 investment accounts.

Although in the first weeks the evolution on the Bankia Stock Market was positive, tears soon arrived. On August 2 of that year, the shares reached their historical maximum to date: 3.811 euros per share, an amount that, adjusted, equals 190.19 euros of the current price. That is, since the IPO at 3.75 euros (182.87 euros after the adjustment), the bank’s shares rose 4%.

But soon the doubts began to arrive. In 2012, coinciding with the debt crisis in the euro zone, the viability of the financial sector due to its high portfolio of toxic assets placed Bankia in the spotlight. It was not the most damaged entity, but it was of particular concern because of its size.

After pressure from the Government and institutions such as the IMF, in May 2012 Rodrigo Rato resigned. From then on, José Ignacio Gorigolzarri took over the reins of the entity, taking charge of sanitation. After reformulating the accounts and knowing how much money it needed to cover the hole, the entity received an injection of 22,424 million.

As a result of this process, the State became the main shareholder of the entity, which was a great dilution for shareholders to date. In July 2012, coinciding with the rescue, Bankia shares plunged to 39 euros (0.76 euros per share discounting the adjustment). That is, they sank in less than a year about 80%.

When it seemed that the bank’s shares had hit the ground, a year later the bank had to face two capital increases to complete its recapitalization, including one that involved the exchange of preferred and subordinated debt for shares. The putting into circulation of the new shares led the securities to collapse at 2.28 euros (0.04 euros without adjusting).

Four years later, in June 2017, the entity approved a contrasplit. With this operation, the bank grouped its shares in a ratio of four to one, so their nominal value went from 0.25 euros to 1 euro. The ultimate goal was to reduce volatility. Once all these operations have been completed, the bank’s price has not experienced so many fluctuations and has moved in tune with the rest of the banking sector, a business that is severely affected by the difficulties of obtaining income in a zero-interest scenario.

With an eye on fusion

Since Gorigolzarri took the reins of the entity, one of the objectives has been to restore confidence to investors and customers. After the clean-ups carried out in the past, the entity is now preparing to face the first major operation in the financial sector. Bankia and CaixaBank are preparing in the coming months to complete their integration, an operation that will lead to the first bank in Spain. Since the news broke at the beginning of September, the entity’s shares have appreciated 27.8%.