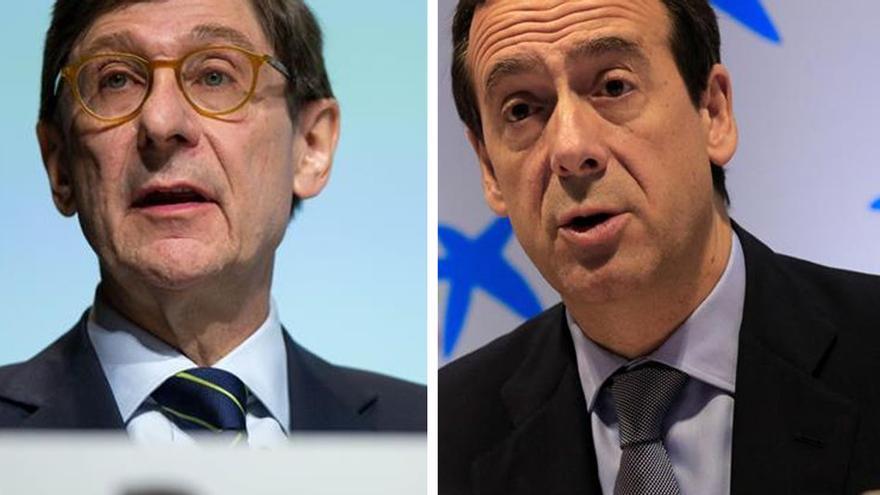 The crisis caused by COVID-19 has given the last push to consolidate the Spanish financial system. CaixaBank and Bankia are studying a merger, which will mean integrating the third and fourth banks in Spain, according to an advance the Ara newspaper and has confirmed elDiario.es. The operation would have the approval of the Government, which through the FROB, has 61% of the shareholders of the Madrid entity. The economy ministry declined to comment on the operation, as did both entities.

The merger would create the first bank in Spain for assets with more than 650,000 million, of which 442,000 million would be contributed by the Catalan entity and Bankia would contribute another 215,000 million.

According to the newspaper Ara, the current president of Bankia, José Ignacio Goirigolzarri would occupy the presidency of the new entity while the CEO of CaixaBank, Gonzalo Gortázar, would occupy the same position in the resulting bank.

The European Central Bank has asked that European banks start a merger process due to the loss of profitability of financial institutions due to the low interest rate environment, the arrival of new technological players and the crisis driven by the stoppage of activity that has led to the coronavirus pandemic.

The Vice President of the European Central Bank and former Minister of Economy, Luis de Guindos, insisted on Tuesday that European banks must address mergers “quickly and urgently” to deal with the coronavirus crisis. According to Guindos, if before the pandemic the need for cost adjustment and elimination of excess capacity in the European banking sector was already “very important,” with the pandemic these actions have become much more essential. “Consolidation is an instrument that can be useful” and “should be carried out relatively quickly and urgently.” “It is necessary to act.”

Just two days ago the governor of the Bank of Spain, Pablo Hernández de Cos, admitted that mergers were part of the solution to the fall in profitability of Spanish entities: “There is room for some consolidation to take place in the sector that contributes to make entities, and the system as a whole, more resilient. ”

Bankia registered a net profit of 142 million euros during the first half of this year, 64% lower than the one obtained a year ago, due to the provisions to face possible contingencies as a consequence of the situation generated by the coronavirus. For its part, the Catalan entity registered an attributable result of 205 million euros in the first six months of the year, which represents a drop of 67% compared to 2019. The result for 2020 includes the recording of an extraordinary provision for impacts futures associated with COVID-19 for 1,155 million euros and a cost associated with early retirement of 109 million euros.

Bankia’s market share in business volume was 9.70% at December 31, 2019, well below CaixaBank, which stands at 28%. The Catalan bank has more than 3,797 offices in Spain and more than 35,000 employees while the Madrid entity has 2,260 branches and does not reach 16,000 employees, but both banks had undertaken plans to reduce offices and staff in view of the poor results they had achieved this year.