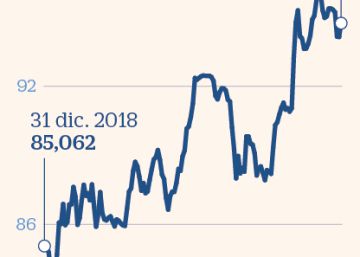 The constant expectation of monetary stimulus from the ECB has long prevented the banks from raising their head. The economic weakness of the euro zone has completely dispelled any hope for banks of a rise in interest rates in the euro zone and, on the contrary, the foreseeable thing now is that the central bank can lower them again or activate their debt purchase program. There is therefore no expectation of improvement for the business margin of financial institutions. With the pressure of becoming a sector that is difficult to profitably, prices on the stock market fall, although the valuations of bank debt issues do not.

While stock prices have weakened as a turn of the screw in the stimulus of the ECB has taken shape, the bank's emissions have benefited from the buying surge that has unleashed in the whole of fixed income that monetary expectation. Thus, with the exception of Santander and BBVA -which have risen so far this year with promotions on the stock exchange of 0.7% and 3% respectively- the rest of the banks -with a much more domestic and traditional banking profile- suffers falls in 2019 between 9% and 23%.

While CaixaBank falls on the Stock Exchange in the year more than 23%, the emission of coconuts that launched the entity in March 2018 has been revalued in the year more than 11%. It is still quoted with a discount of 6% on the face value, but pays a 5.25% coupon that the solvency ratios presented by the bank do not doubt either. "The regulatory and market demands are making banking the best solvency," explains Miguel Castells, director of investments of Liberbank Gestión, which considers that there is more value in banking issues, especially subordinated debt, than in the actions of banks.

"The banking profit forecast is going down but we are overweighting the bank debt before the possibility that the ECB could include for the first time the financial issues of senior debt in a resumption of its purchases of assets, as a sort of compensation towards the sector, "says Borja León, fixed income manager of AndBank.

Thus, the ECB has marked with its policy of zero rates the weakness of the business that weighs on stock prices, but is also the one who dominates in the debt issues of the sector and is allowing its revaluation. E, whether or not it includes senior bank bonds in a possible new QE, the resumption of monetary stimuli will foreseeably have a renewed upward effect on the whole of fixed income, whose wave of expansion would also reach the debt of financial institutions. Pending more measures from the ECB, one of the main bets of León is a recent issue of Bankinter senior debt, due in 2026.

Bank issues have in fact become a key part of some mixed fund managers, with margin to combine debt and shares. This is the case of the B & H Flexible fund of Buy & Hold, where one of the main positions is the Ibercaja coke emission, which pays an annual coupon of 7%. "It has to go public before the end of 2020, in the face of which it will strengthen its capital and, as creditors, we will see ourselves with greater solvency. In addition, they manage assets off the balance sheet very well, where they do not affect interest rates so much, "explains his manager, Rafael Varela. The manager also bets on the issue of subordinated debt of Cajamar, which pays 9% per annum. "The entity works in the area of ​​greater economic growth in Spain, where tourism works very well and real estate is picking up," adds Varela.

"In the current context, we maintain our positive opinion regarding corporate credit assets and especially in the investment grade segment," adds Álvaro Soldevilla, director of discretionary management at Deutsche Bank Wealth Management. Even so, the low visibility of the banking business in the medium term is also reason why, beyond a tactical vision, some fixed income managers also observe banking issues with caution.