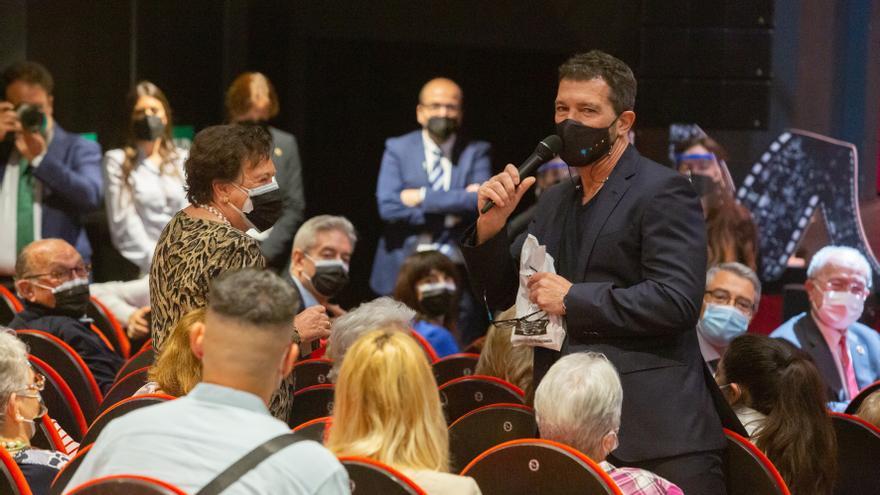 Malaga, May 7 (EFE) .- Seeing the illusion of a child in the eyes of an octogenarian is possible and this Friday it was possible to glimpse in the faces of the 350 elders invited by Antonio Banderas in his Soho Theater in Malaga to a film music concert, on its first outing after more than a year confined by the pandemic.

“I sincerely believe that art in general, and cinema and music, have a therapeutic value, they heal,” said Banderas from the stage before the Soho Pop Symphony Orchestra’s concert began before an audience of older people already vaccinated. against covid-19 participants in the “Soledad 0-Vida 10” project of the Harena Foundation.

And Banderas has proclaimed that therapeutic value of culture “not only as a performer who goes on stage”, but also “as a patient”, who has had to “use music and literature, and shoot movies”, to heal, get out of the state you were in and “live” again and interact with others.

“You are probably the group that has suffered the most from this pandemic,” added the Malaga actor, who highlighted the “way in which the elderly have behaved” during this period, who “represent who we are and support the personality of a people “.

Banderas has read the letter written to him by one of the spectators, Mercedes, who coincidentally lived for more than thirty years in the same apartment where the actor now resides in the center of Malaga.

“You have to come home for coffee. We have changed it a bit, because we have thrown down some walls,” the actor invited Mercedes, an amateur actress in the Amaduma group, the Association of Older Friends of the University of Malaga.

On behalf of those present, Mari Cruz, 90, who was widowed thirty years ago, has spoken and, although she has two daughters and a son, has reported that she lives “alone, attached to a breathing machine.”

“I have a very bad time with loneliness, which is the worst thing that God can give a person,” said Mari Cruz, who admitted regretfully that she does not usually find herself “in the mood” to go out, because she lives on the second floor ” no elevator, and the stairs have no light “, and when he goes down one day, later the neighbors take him up” on their shoulders, like bullfighters. ”

Florinda, 91, suffered cancer and, when she was about to be discharged from the hospital, she was “afraid to go home” because she knew that she would be alone there, and at that moment she was told about the Foundation for the first time Harena, whose volunteers began visiting her at her home.

“During the pandemic, Harena sent me some boys to do the shopping for me. Juan Carlos came, who is already my grandson, he takes care of everything, he buys me the best chosen and where it is cheaper so that I do not spend a lot” Florinda added.

After these testimonies, it was the turn of the music by the Soho Pop Symphony under the baton of the musical director of this stage, Arturo Díez Boscovich.

After an opening with the fanfare “A celebration for the Soho Theater”, composed by Díez Boscovich himself, the first piece was well recognized by the audience, because it was the main theme of the film “Lo que el viento se I wear”.

They have also been able to hear songs from “Aladdin”, “Blade Runner”, “Silverado”, “Agent 007 against Doctor No”, “Jaws”, “ET The Extraterrestrial”, “Breakfast at Diamonds”, “The bridge over the River Kwai “,” Amarcord “,” Encounters in the third phase “or” The Empire strikes back “, among others.

Among the attending public were authorities such as the president of the Junta de Andalucía, Juanma Moreno, or the mayor of Malaga, Francisco de la Torre.

“The volunteers assure that, since they found out they were coming to the theater, in recent days the older adults did not talk to them about pain, ailments or sadness, only about how excited they were and about the clothes they were going to wear to see Flags “, point out those responsible for the Harena Foundation.