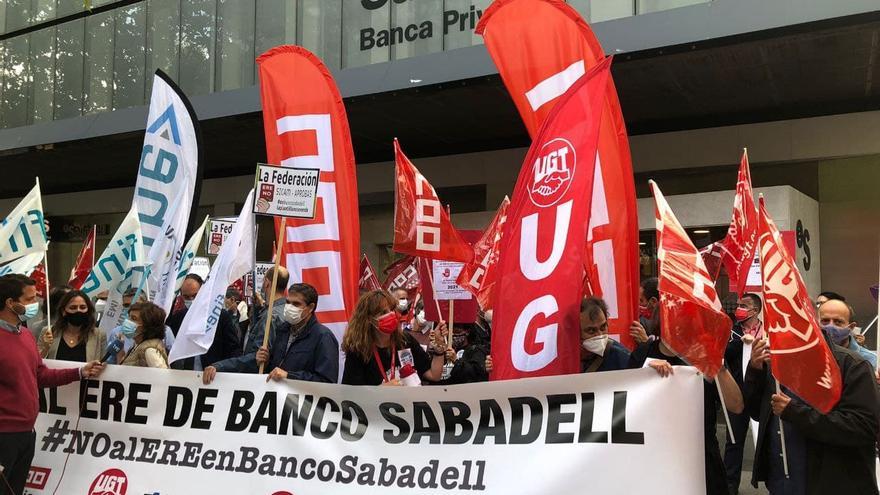 The workers of Banco Sabadell have begun this Thursday a calendar of protests that will extend over the next few weeks against the ERE that the Catalan entity has opened and that would affect 1,936 people. The negotiations, which this Wednesday saw their second meeting, have begun with distant positions between the group and the unions, which have come to label in the last hours as “shameful” and “insulting” the conditions proposed by Sabadell to carry out the cut of template.

As in the cases of CaixaBank or BBVA last spring, the unions have chosen to show their rejection of the process with mobilizations, something that to date was not so common in a sector historically known for its social peace. Banco Sabadell announced a new ERE a few weeks ago, in addition to the incentivized exit plan that was presented in December of last year and affected 1,800 workers, although in that case it was not negotiated as a collective dismissal file, as is the case now . If the bank’s plans are fulfilled, in less than 12 months there would be 3,700 worker exits, joining the EREs that have been taking place in Banco Santander, Ibercaja, BBVA, CaixaBank and Unicaja, which is currently being negotiated.

This Thursday the protests of the staff begin, which this week has presented a calendar of protests that will extend over the next few weeks, in parallel to the negotiation with the bank. The protests at the entity’s headquarters in different cities this Thursday and the next few days will end up adding partial stoppages at the beginning of the month and a strike is planned in the group, as already seen in CaixaBank and BBVA. Cities such as Seville, Sabadell or Madrid have experienced the first protests this Thursday.

The negotiating table held the second meeting between the entity and the unions on Wednesday. After it, organizations such as the UGT or CCOO issued separate statements strongly charging against the measures proposed by Banco Sabadell. “The justification it raises does not correspond to what CCOO has detected and analyzed so far, showing that there are no economic, productive, or organizational causes that require a staff adjustment of this caliber,” said this union. For its part, the UGT assured that it is an “insulting and embarrassing” proposal.

According to union sources at the end of the second formal meeting of the negotiating committee, the entity has offered early retirements for employees between 56 and 62 years old who have at least 15 years of seniority. To workers aged 56 and 57, the bank offers early retirement with 50% of the annual salary from the date of termination and a special agreement with Social Security until age 62, with a ceiling of 270,000 euros, discounting two years of unemployment and unemployment benefit, if applicable.

For those between 58 and 63 years old, he proposes to leave the entity with 55% of the annual salary until the age of 63 and an agreement with Social Security until that moment, with a ceiling of 270,000 euros, discounting two years of unemployment and the subsidy unemployment, if applicable. For their part, workers under 50 years of age or who do not meet 15 years of seniority, will have the option of leaving the entity with compensation of 27 days per year worked, up to a maximum of 18 monthly payments. As already communicated in the previous meeting, those over 63 years of age and employees between 50 and 55 years old will not be able to join the ERE.

The bank already warned last spring, during the presentation of its strategic plan, that it was going to face new staff and branch adjustments that would be added to those made at the end of 2020. During this year, César González Bueno has joined the bank as a director delegate, replacing Jaime Guardiola, who left the entity months after the merger that the group attempted with BBVA failed to forge and which was broken after not reaching an agreement on the valuation given to Sabadell. González Bueno raised on different occasions an office model focused on products such as mortgages, funds or insurance, while the rest of the operations would be directed to telematic channels. Those plans have been forged in the ERE that the bank has raised this September.