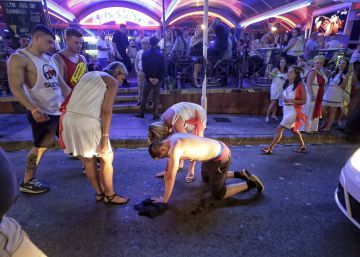 Baleares wants to curb the excesses of drunken tourism. The Government has approved this Friday a law that puts a stop to regular products in recent years like excursions, 2×1 parties, happy hour or free bars. To curb these practices in a community that receives every yearover 13 million foreign tourists advertising is prohibited and sales are limited in tourist premises. It is also forbidden to sell alcohol in commercial stores with night hours, whose establishments will have to close between 21.30 and 8.00. The rule It is limited to the most saturated areas of Mallorca and Ibiza: Magaluf, El Arenal and West End of Sant Antoni. “It is an exceptional norm for an area determined by a specific problem,” explained the Minister of Tourism, Iago Negueruela.

The text, which will enter into force the day after its publication next week in the BOIB, suspends the granting of new licenses for party boats (parties organized in boats) and includes a penalty system with fines of up to 600,000 euros and the possibility of closing the business for a maximum period of three years. “This is the first rule in Europe that restricts the promotion and sale of alcohol in certain tourist areas,” says the note issued by the Government. “It will have great repercussion also outside of Spain,” say spokesmen for the Ministry.

Another behavior that the new text wants chase is the balconing (A phenomenon that has cost lives that consists of moving from one balcony to another or jumping from a considerable height to a pool). In this case, the rule covers the entire community and forces hotels to expel from their facilities people who practice the balconing. “It will be considered a serious offense, both for those who practice it and for those who allow it.” The Minister of Tourism has defended the rule to redirect the situation in the most affected areas: “We are committed to a sustainable tourism model and we want to improve the coexistence between tourists and residents.” The text also includes measures to end the use of women as a claim by tourist sites. “Women may not be used as a claim to enter premises or for sale. This will also apply throughout the community.”

Regarding the excursions, the norm prohibits its publication and organization. In the first case, to avoid alcoholic routes in the affected areas. Those tourists who do it on their own will have no limit, although they will not be able to buy alcohol until now at establishments during the night nor will they be able to buy tickets to places with open bar or other promotions of this type. “It ends with the possibility of permanent purchase,” said Negueruela. In addition, alcohol will have to be sold at the unit price, “without any type of offer,” he added. The party boats They cannot be advertised in the areas affected by the decree nor can they pick up or leave customers at those points. “In addition, the granting of new licenses is suspended and a period of 24 months is opened to regulate the activity,” says the Government.

As for the penalty system, the text includes fines of between 1,000 and 600,000 euros and the possibility of closing establishments for a maximum period of three years. The Ministry of Tourism, with Iago Negueruela at the helm, has thus managed to carry out a decree that the last legislature stayed on the road because of the complexity it presented and because of differences with the sector.

The writing of the norm has been carried out after an extensive dialogue with the sector, including City Councils, which have identified the problems derived from this type of tourism. In part, these excesses have caused a negative reaction of residents against the tourism business known as turismophobia. “Attracting excess tourism is counterproductive for the entire sector, so there are already areas where hoteliers are changing their offer to attract another visitor,” acknowledged a few days ago José Luis Zoreda, Exceltur vice president.

The territorial scope covered by the decree focuses, for the moment, only in certain areas (except in the case of balconing), although the Minister opens the door to expand the areas if the situation so requires or the Consistories request it: “The law may be extended to other affected areas if we see that it is necessary. From the Town Halls themselves they can request it and we will act with the same forcefulness, “said Negueruela. Despite this regulatory change, to maintain legal certainty, contracts already signed between tour operators and hoteliers will be respected.