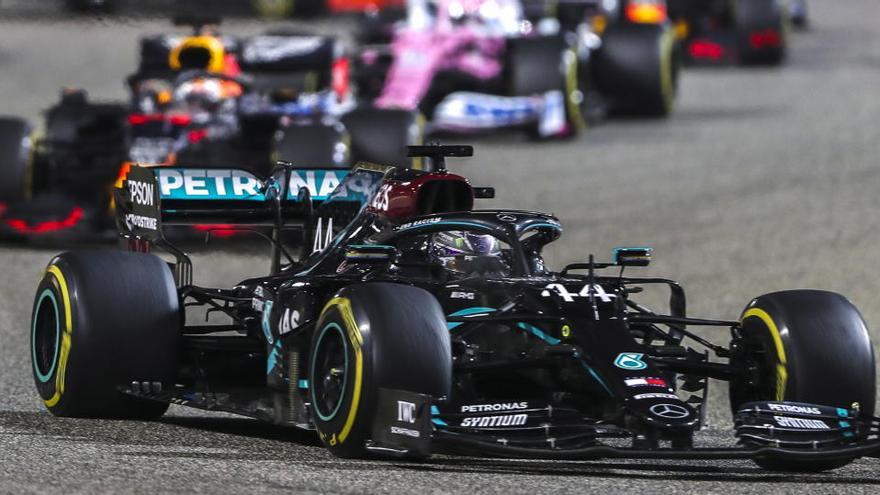 On Sunday Lewis Hamilton (Mercedes) won again Y Romain grosjean (Haas) was born again. And none of them will play this weekend the Sakhir Grand Prize, repetition, with the track reduced, of Bahrain: the English, for its positive for COVID-19; and the Gaul, being still recovering from the wounds of the chilling accident in which he miraculously saved his life.

To Hamilton, who after raising the record for ‘poles’ to 98, also raised his own historical record of triumphs to 95, will be replaced by his compatriot George Russell, from Williams, who will be replaced by another Englishman, Jack Aitken, in the Grove team. And the Haas de Grosjean will be joined by another rookie: the Brazilian Pietro Fittipaldi. Grandson of Emerson, the legendary pilot from São Paulo who in his day – and before he lost that condition – the youngest world champion in history was replaced by the Spanish Fernando Alonso: like him (1972 and 74) winner of two World Cups (2005 and 2006).

The English star smoothly dominated a race that started with a giant scare, seeing Grosjean’s car engulfed in flames, shortly after departure; and with the idea, as the television replay of the accident was not shown, that the outcome could be the worst possible.

When shortly after the Frenchman was seen conscious and inside the medical car, calm returned. But, despite knowing that he was well, the viewing of the accident -which went around the world and transcended the sports chronicle-, apart from being distressing, confirmed that Grosjean had saved the life of a miracle. The halo prevented its decapitation, when the car crashed against the protection fence; and with the car split in two, it took the French 27 seconds to get out of the cockpit, engulfed in flames.

Fortunately everything was a fleeting nightmare. Romain, who was admitted to a military hospital in Manama, the capital of the Arab kingdom, suffered no major injuries. But there are burns on his hands, which will leave him out of the next race and maybe the last one of the year, next week and in Abu Dhabi.

If so, Grosjean – already discharged and who obviously wants to run – of whom it was already known that, like his Danish colleague Kevin Magnussen, it would not follow in 2021 in F1, would have closed his career in this peculiar way in the queen category.

Just one day after announcing, on Tuesday, that Russian Nikita Mazepin would be the official pilot next year, Haas released the most anticipated news for a long time: his partner will be the German Mick Schumacher, the son of the ‘Kaiser’, Michael Schumacher. Whose legendary record of seven crowns had equaled (after improving the ‘pole’ three years ago; and the victories, this one) three Sundays ago, in Turkey, Hamilton. Who was informed that day that the coronavirus interrupts, at least for the moment, its centennial route.

Hamilton, 35, is replaced by Russell, 22. Who optimizes resources in the worst car on the grid. With which on Saturday he not only raised his internal qualifying balance to 15-0 against Canadian Nicholas Latifi, but also increased his personal best to 36-0, after beating last year in all the ‘chronos’ his then colleague, the Polish Robert Kubica. Equaling the 21-0 (biggest difference in a year) with which Alonso subjected Belgian Stoffel Vandoorne in 2018: the course in which Russell won the F2.

In the World Cup, second place is still at stake, which is occupied by the other driver of Mercedes, the finnish Valtteri Bottas, with twelve points over the Dutch Max verstappen (Red bull), second on Sunday.

Your thai companion Alexander Albon he was third in the first test in Bahrain, taking advantage of the misfortune of Mexican Sergio Pérez; to whom, when he was rolling in that position, with three laps to go, the engine broke from Racing Point. ‘Checo’, who, in a telematic press conference, explained on Monday that he either signs for Red Bull or takes a sabbatical, will go back to recover the fourth place that, by two points, the Australian took Daniel Ricciardo (Renault). The Spanish Carlos Sainz (McLaren) -eighth in the World Championship, with 85 points, fifteen less than the Mexican- He repeated on Sunday the comeback of the day he starred in Turkey, rising again from fifteenth place on the grid to final fifth place.

This Friday free practice will start in Sakhir, on a circuit with a different configuration than usual. Reduced to 3,543 meters, in which will be rolled on the outer ring, without the second of its three sectors; with 11 curves: eight to the right and three to the left. That will be repeated 87 times in Sunday’s race, to complete a 308.2 kilometer course.

That, after qualifying on Saturday, is not easy -because it is a very short and fast lap-, and it will take place hours after the last free test. On a track where too used tire compounds will be repeated last weekend: the C2 (hard, recognizable by the white stripe), C3 (medium, yellow stripe) and C4 (soft, red).

Despite signing another brilliant comeback, Sainz was not entirely happy with fifth place on Sunday, because he could have opted for fourth, that of his English partner Lando norris. Seventh in the World Championship, with one point more than the talented driver from Madrid.

In another great season, Norris and Sainz have elevated McLaren to third place in the Constructors’ World Cup – with 171 points, 17 more than Racing Point. The highest one can aspire to, after Mercedes mathematically certified, more than a month ago, its seventh title followed by teams: a classification in which, whatever happens, Red Bull will finish in second place.

A year without Kobe Bryant: the accident that shocked the sports world

A gigantic LeBron James saves the Lakers from the Cavs trap