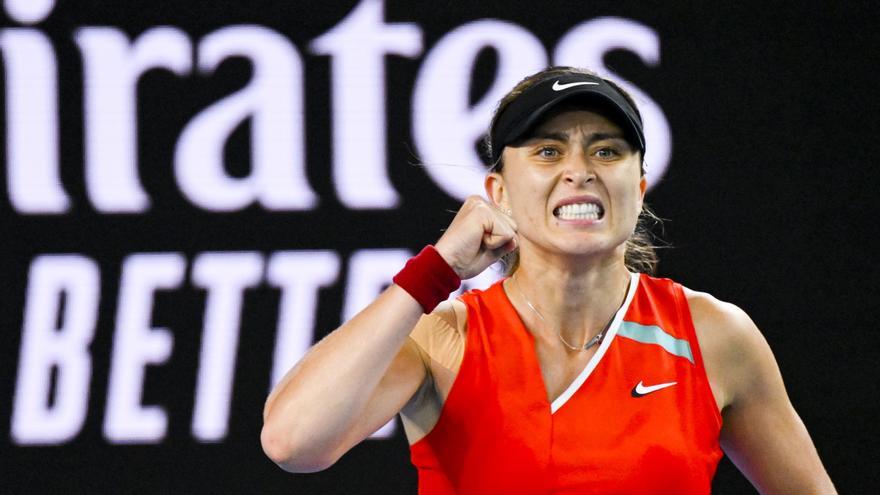 The Spanish Paula Badosa (8) suffered against the Ukrainian Marta Kostyuk After winning the third round of the Australian Open by 6-2, 5-7 and 6-4 in a crash that lasted two hours and 19 minutes. “I was waiting for a match like this. She is an incredible player, she has played like a top-5 player. She is going to become one of the best in the world soon”, she commented after merging into a warm hug with the Ukrainian on the Margaret Court Arena net. “I am very motivated, I am playing very well. This is one of my favorite tournaments, so I am very happy to reach the second week”, she added.

Kostyuk, who once again demonstrated his potential to dominate the circuit in the near future, he saved three match points, two serving and one serving, before Badosa sealed the match by winning a spectacular exchange from the baseline. The woman from Girona, to whom he missed his first set so far in the competition, lost his temper in the final stretch of the second set but kept a positive seven of eight break points that showed his firmness in the delicate moments. However, he suffered more than expected with a service, conceding up to fifteen break points and accumulating 64% of points with firsts.

Kostyuk, who is a close friend of Badosa on tour, she was unable to match her best record at Melbourne Park after she in 2018 became the youngest player to reach a third round at a Grand Slam since Mirjana Lucic-Baroni at the US Open in 1997. Badosa established the 2-0 in a face to face that has all the ballots to become a prominent rivalry in the coming years.

The next rival of the woman from Girona, the only Spanish hope alive in the draw, will be known after the conclusion of the clash between the American Madison Keys and the Chinese Qiang Wang. She will continue with options to match her best result in a 'major' competition than dates from their quarterfinals during the last edition of Roland Garros.

The Belarusian Victoria Azarenko (24) hit the table overwhelming Ukrainian Elina Svitolina (15) in a third round in which he won by a severe 6-0 and 6-2 after just over an hour. Azarenka embroidered it again after committing only nine unforced errors and thus ratifying the words of her Spanish friend Paula Badosa (8), who commented that the Belarusian would be a serious candidate for the Australian 'major' after she was eliminated by double Australian Open champion at the recent Adelaide tournament. He was brilliant at net after scoring the point nine of the ten times he finished in the net at Rod Laver Arena, as well as on serve after holding all of his serving games. She became the first tennis player to reach the round of 16 after opening day five at Melbourne Park on Center Court. She will face in the round of 16 the winner of the duel between the Czech Barbora Krejcikova (4) and the Latvian Jelena Ostapenko (26), Roland Garros champions in 2021 and 2017, respectively.